Business View Magazine interviews representatives of the Town of Brownsburg, Indiana for our focus on Growth & Infrastructure in American Cities.

Welcome race fans! A motorsports mecca, The Town of Brownsburg, Indiana stands proud along I-74, just minutes from Indianapolis in northeast Hendricks County. The town is home to Lucas Oil Raceway, where the world’s most prestigious drag racing event takes place every Labor Day Weekend, and is less than 20 minutes from Indianapolis Motor Speedway, host to the renowned Indianapolis 500. In the midst of all that excitement, Brownsburg is revving its own economic engine, as it redevelops the downtown core, updates infrastructure, and boosts awareness of its position as a prime location for families and businesses, including many motorsports team headquarters and related industries.

Jeff Eder, Brownsburg Town Manager since June 2019, is responsible for economic development, directing day-to-day operations in carrying out the policy directives of the Town Council. He relates, “It’s great coming into a new community and learning how they have grown. The last 20 years have seen phenomenal growth for the town and, from my perspective, I don’t see that growth slowing down. If anything, I see it picking up in the next few years. They do it right, here. They’ve planned for the long term. They’ve concentrated on keeping up with the infrastructure piece of it and have created some very nice partnerships – not only with developers and builders but also with other local government agencies; especially working with our outstanding school district, so they can keep up with the demands of the community.” 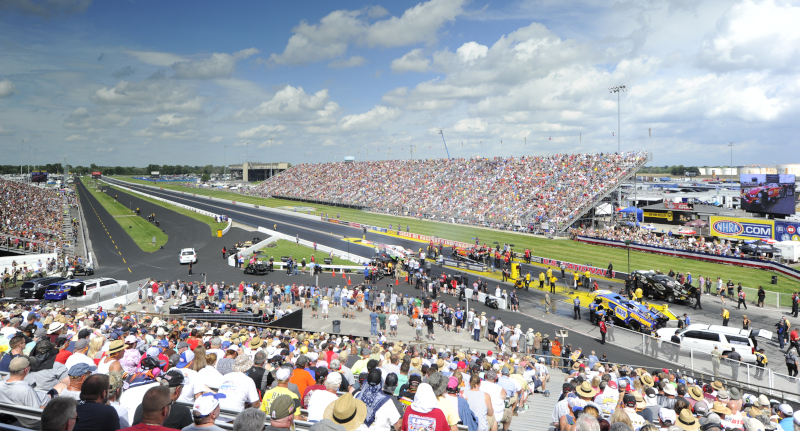 Public-private partnerships on four mixed-use developments in 2016 have transformed the downtown area into a pedestrian-friendly economic center. Investments totaling nearly $90 million, include office suites and a co-working space, luxury apartments, retail spaces, restaurants, and parking. Town leaders and administration worked on a Master Plan for the 10.5-acre site, formerly the St. Malachy church and school property, that was purchased by the town in 2011. The goal was to establish a central gathering point in the north downtown to bring people into the community. The Town’s initial $2.4 million investment in the property purchase, along with economic development incentives for those projects, has been multiplied many times over.

As part of the downtown development, Indianapolis-based, Envoy Inc. constructed Elevate Office Suites – a $4.8 million, 28,000-sq.-ft. office building. The project includes 115 individual suites, conference rooms, and a co-working space. Flaherty & Collins’ $40 million, four-story project, ‘The Arbuckle’, includes more than 200 luxury urban living apartments. The 391,502-sq.-ft. development has first floor retail space and a 400-space parking garage. Paragon Development constructed the Green Street Depot retail/office project with approximately 18,000 square feet of retail on the first floor and 17,000 square feet of office space on the second. The project added 200 additional parking spaces. The Brownsburg Town Center by Scannell Properties is a $30 million, four-story development with 11,000 square feet of retail space on the ground floor and 170 luxury apartments above. That project includes a 212-space parking garage, which was financed by the Town.

Guided by the downtown development Master Plan, the town redesigned N. Green Street to include a dedicated left-turn lane, sidewalks, bike lanes, enclosed storm sewer improvements, rain gardens for stormwater runoff, and railroad crossing improvements. This $5.7 million road reconstruction project was awarded $3.27 million in FHWA Safety Improvement Program funds. The downtown project fascinated Eder. He reflects, “To know that the town started working on that back in 2011, with the purchase of the old Catholic church property, then went about redeveloping the downtown in a methodical way – it’s great to see a community with foresight. Infrastructure improvements were completed in tandem with the new construction. Some green infrastructure with rain gardens were added as part of the stormwater project, making the downtown a destination into the community. Our downtown development partners are performing very well. The apartments have leased up nicely; commercial spaces are hitting their stride. A second restaurant, Thai District Restaurant, has now opened up in one of the new buildings downtown, so we’re really getting some good momentum. And Rush Off Main has been open close to a year and doing very well.” 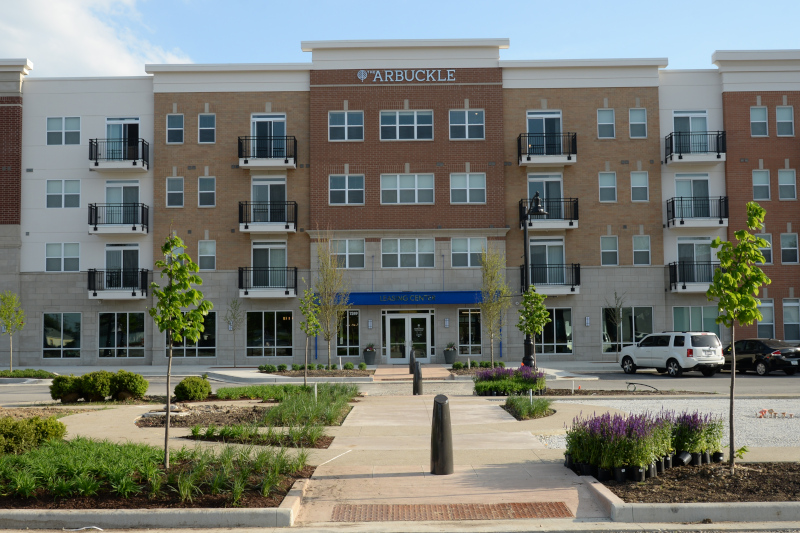 Brian Jessen, Town of Brownsburg Council President, adds, “The other important thing that’s going on in the east side of town is the Ronald Reagan Parkway being connected in the last couple years. The Parkway was designed to be a bypass, basically to get around Indianapolis – if you were coming eastbound on 74 and needed to go west toward St. Louis, you didn’t have to go through the city anymore and get stuck in the 465 loop traffic. Eventually, this route will connect two major interstates through Hendricks County. We completed the last section connecting Brownsburg into Avon, so you can now get from 74 all the way down to Interstate 70. Within the next 10 years, there are plans for that route to continue north toward I-65. So Brownsburg is sitting in the right spot; mere minutes from the airport off the Reagan Parkway, as well as downtown Indianapolis, so you’ll have the best of many worlds by doing business and living in Brownsburg.”

The town annexed Ronald Reagan Parkway in 2011, and in 2012 expanded the municipality’s Tax Increment Financing District to include 2,143 acres around the parkway to secure future commercial development. Brownsburg’s comprehensive plan calls for land along the parkway to be used for warehouses, office campuses, hotels, restaurants, and other retail development. In fact, in June 2019, ecommerce technology and operations leader, Radial, opened a 700,000-sq.-ft. fulfillment center that will employ 2,000 workers. The developer had the building under construction and actually leased it before completion.

Undoubtedly, the motor racing community is a driving force behind Brownsburg’s economic growth. From racing parts, to racing development, to race teams, along with a good number of related companies coming in to support that industry. According to Eder, “With regard to the support industries for the motorsports sector, the very precise CNC machine work used in this industry has applications in a host of industries. Not only do they service the racing industry but other automotive and different industries that need high tolerance parts made.”

Most residents (83 percent) leave town to go to work, but they love coming back to live in Brownsburg. Housing stock is available and varied. Overall, apartments in the community are over 95 percent full. Single family homes are well priced from mid $150K to the $500,000 and $600,000 range. “Builders have eight different developments with new subdivisions under construction right now and they are constantly pumping out a volume of new homes,” says Eder. “As the town grows, we’re trying to keep up with our parks system – adding trails, making sure there are sidewalks connecting neighborhoods, refurbishing existing parks such as Arbuckle and Williams, and also developing Cardinal Park, and adding amenities like restrooms to the trail heads. We’re concentrating on keeping our town walkable but respecting our designation as a Tree City. Our codes require that trees and landscaping be planted in any development situation – whether residential, commercial, or industrial.”

From an industrial standpoint, one challenge facing Brownsburg is the lack of available, existing buildings. So they are actively working with developers to build new spaces. Land owners along the Ronald Reagan Parkway are putting their property on the market and developers have started to purchase. The town is also going through the process with infrastructure providers to ensure utilities and all necessary amenities are in place. As Jessen explains, “The State of Indiana focuses on assessed value for distribution of tax revenue, so as the value of Brownsburg is increasing with commercial space and industrial space, we’re seeing the long-term benefits of that being able to assist us with infrastructure projects, park developments, etc. So, it’s all flowing in the right direction. Brownsburg was founded in 1848 and we’re not getting any younger, so we’re back to focusing on the streets, sidewalks, and lighting, to improve things throughout the community. Now that we have the seeds not just planted but growing with the downtown, we’re hoping to see the results of such a plan.

“People have noticed what’s going on in Brownsburg; they’re talking about it. The piece is in place that’s bringing attention where we need it. Now, we want to be able to add to the conversation when they come out and ask us what’s going on in the community. We can tell them we’re improving the traffic flow through town; looking at different zoning options to keep the growth going; looking at trying to improve the overall appearance. And we want to make sure we’re keeping up to date with what residents are asking for when it comes to walkability and connecting neighborhoods, and ensuring as those improvements are happening, that people know what’s going on.”

Racing to the Top

Thanks to the town’s quality of life, affordability, central location, and easy access to transportation many professional racing teams are headquartered in Brownsburg. Supporting motorsports businesses also make their home here. And, because Brownsburg is central to the North American racing community, Honda Performance Development put a state-of-the-art driving simulator here.

Race teams currently in Brownsburg include:

Hendricks Regional Health (HRH) has an innovative, holistic partnership with the Town of Brownsburg, Indiana, providing low-cost, high-quality health care that significantly benefits the entire community. According to Kevin Speer, President & CEO, “About seven years ago, Hendricks Regional Health committed to our business community and our towns that we would provide a low-cost, high-quality solution for them. Data shows that when businesses are looking to locate or relocate or expand, one of the top criteria is the access to quality healthcare. And with the cost of healthcare becoming an impediment to business growth, we wanted to provide the lowest–cost, highest-quality option to our partners in west central Indiana.”

Through its Hendricks At Work service line, HRH provides a Wellness Center for Town of Brownsburg employees and their families/dependents with low-cost, high-quality care in a convenient, time-efficient manner. Employees can choose the HRH health plan (tiered network), making it possible for the town to offer robust health insurance benefits while keeping premiums affordable. And the good news continues. “Most recently we’ve expanded our relationship with the Brownsburg Fire Territory,” says Speer. “They chose HRH to provide wellness initiatives and fit-for-duty physical examinations, which we are now doing for the Brownsburg firefighters. And just over a year ago, HRH opened a new hospital in Brownsburg, providing affordable quality healthcare for the community as a whole. We’ll be expanding on this initial footprint in the next few months and years.”