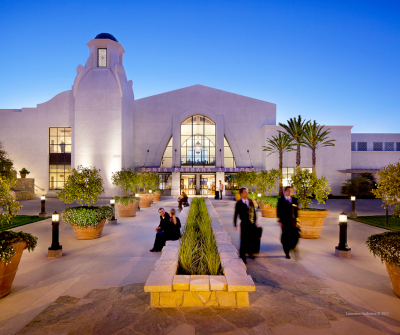 Known as SBA, the Airport has its beginnings in Santa Barbara’s rich history in aviation, which dates back to 1914 when Lincoln Beachey flew an airplane across Santa Barbara County’s Goleta Valley. Two years later, a seaplane factory was established in Santa Barbara by the Loughead Brothers, who later changed their name to Lockheed.

“Shortly after they purchased the land for the airport, United Airlines, which had been flying out of the airport since 1936, entered into a 20-year ground lease with the city, and they constructed the original airline terminal,” she recounts. “Just as soon as they got that completed, World War II took off, and in 1942, the Airport became a U.S. Marine Air Corps station where they trained pilots and crews.”

At the war’s conclusion, the U.S. War Department returned the Airport to the city, but the agreement contained an interesting caveat, and the provision proved to be a stumbling block in the eyes of Santa Barbara officials. “Most airports that have grant deeds from the War Assets Office have the provision that should there be another war, they can come in and take over the airport again,” explains Johns. “The City of Santa Barbara fought that provision because they just did not want that to happen. So it took a few years after the war, to finally come to an agreement and that provision is not part of the grant deed for the Airport.”

Santa Barbara Municipal Airport’s historic airline terminal was small – just 7,200 square feet, originally. There were two expansion projects over the years, but they failed to adequately keep pace with growing demand. In the early 1990s, tents were set up outside the terminal for handling luggage because there wasn’t sufficient space inside. The space crunch was compounded when the TSA set up shop there after 9-11.

“At that time,” says Johns, “even though we had talked about a new terminal, we really hadn’t proceeded with it. So, after about a three-year effort, we were successful in staying on-budget and creating a LEED Gold terminal that opened on August 17, 2011. We’ve been working with the community over the years, to provide the type of terminal and air service that is needed by our region, and at the same time, accommodating our general aviation community.”

The Santa Barbara Municipal Airport is currently in the midst of an $8 million reconstruction of its main commercial runway, made possible by a grant from the FAA. Santa Barbara Municipal Airport’s recently completed five-year master plan calls for the extension of one of the parallel taxiways to the main runway and that project is currently in the design phase. Johns says FAA Airport Improvement Grant funds are expected this summer for improvements to the general aviation apron.

Santa Barbara Municipal Airport is self-sustaining, receiving no tax dollars from the city. Approximately 25 percent of revenue is generated from the more than 120 tenants whose aeronautical and non-aeronautical-related businesses are located in the Airport’s roughly 95-acre industrial-commercial section. That income stream helps to subsidize aviation operations.

All of the Santa Barbara Municipal Airport’s almost 100 hangars, including its 24 T-hangars, are full, says Johns. But whether there’s a lengthy waiting list, as many similarly sized airports have, she points out that GA traffic at Santa Barbara Municipal has actually been on the downturn. “I think having a commercial operation and TSA, and the security requirements imposed by TSA, limits the freedom of general aviation,” she explains. 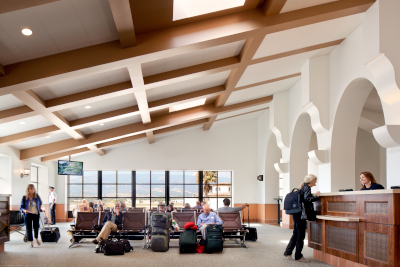 Where size is concerned, Santa Barbara Municipal Airport is a rather large operation in the small-airport category, currently ranking 134th out of all U.S. airports. There is a staff of 54, all city employees, with most working in maintenance, security, and operations.

The Airport plays a demonstrably significant part in keeping the economies of Santa Barbara and the surrounding area humming, according to Johns. “In 2017, UCSB, the University of California at Santa Barbara, did an economic impact study for the Airport and at that time, the Airport generated $205 million annually for the community,” she reports.

Johns says that Santa Barbara Municipal faces stiff competition from other airports in its neck of the woods. “We certainly do for air service for our region, for the catchment area that we serve, which is pretty much the Tri-counties – from San Luis Obispo County down to Ventura County, along the Central Coast,” she admits. “We’re the busiest airport between LAX and San Francisco or San Jose. But our competition for air service would be Los Angeles and Burbank. For general aviation, our competition would be the non-commercial airports: San Ynez, Santa Paula, and Camarillo. Those airports aren’t as restricted as we are with having TSA.”

As for what’s next on the capital project front, the Airport’s master plan also calls for the relocation of its two FBOs and all general aviation facilities to the north side of the main runway. They are currently located to the runway’s south side and the shift will leave that area available for commercial aviation. Other initiatives include opening up, for the first time, the right to be an FBO at the Airport to a bid process. Johns says other FBOs have expressed interest in locating at SBA, which has a limited amount of space available for development. Half of the Airport’s 945 acres are taken up by the environmentally sensitive Goleta Slough Reserve, where construction is banned.

“We are beginning the process of putting together a solicitation for proposals from the fixed based operators, and we would have two properties at the Airport to rent to the successful FBOs,” says Johns. “We anticipate at least 18 months to get through the solicitation process, review the proposals, and to check the financials and backgrounds, and then make awards for long-term leases.”

Johns adds that two long-term goals include finding a way to expand vehicle parking at the Airline Terminal, which is short supply, and expanding commercial air service. “I would hope that we would be able to increase our air service in the next five years, adding routes, as well as an air carrier or two,” she avers.

Johns is unsure of whether female directors of airport operations are rare across the industry, but she has noticed their numbers increasing over the years. “I think Los Angeles has had one, San Jose has had one, Oakland has had one,” she notes. “At Santa Barbara, the Director before me, Karen Ramsdell, was the Director for about 34 years. I’ve been Director for the last five years. So, in Santa Barbara and in the region, I think we’re certainly unique.”

Check out this handpicked feature on The Roswell International Air Center – Potential unlimited.

WHAT: A public-use airport with commercial service 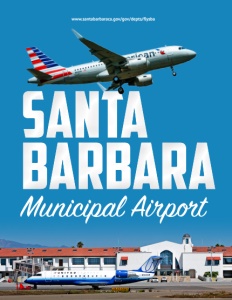