The Team You Trust

Tires may go on cars – but it’s the owners of those cars who buy them. So in order to get a healthy share of the $37.3 billion that Americans spend on replacement tires each and every year, customer service must be paramount. And treating the customer right is one key element that has contributed to the ongoing success of Big O Tires over the last fifty plus years. By first gaining, and then retaining, the loyalty of its customers, Big O has earned the slogan, “The Team You Trust.”

Today, Big O Tires, headquartered in Palm Beach Gardens, Florida, is one of North America’s largest tire retailer franchisors. The company has a long and storied history in the annals of American motoring. Big O was founded in 1962 by a group of former dealers of OK Tire and Rubber Welders, a business created in the 1930s by Nebraskan, Harold V. James. James was an inventor who developed an electric machine designed to repair tires without the “bump” that had always accompanied tire repairs in the past. During World War II, when rubber was being rationed, he invented another machine, the “rubber welder,” that helped salvage and retread used tires, thus saving precious rubber and keeping older cars on the road.

In time, internal company disputes led to a fracturing of the original group of OK dealers, and led by one of James’ sons, Millard, the dissenting faction regrouped as Big O Tires. It maintained its connection to the OK organization by retaining the “O” in its name, but, according to current Big O Tires Executive Vice President and COO, Kevin Kormondy, the new company felt that it could take OK’s original concepts and organization “in a different direction and to a whole new level. The watchword was ‘Better Image – Greater Opportunity.’” And one key element of the original Big O company that still continues to this day is the “open exchange of ideas” among corporate and its franchisees.

Historically, some of Big O’s past innovations included a “speed lane” that utilized an assembly line concept and allowed several technicians to work together on a car, reducing the time it took to have tires mounted on it by a considerable margin. This concept remains one of the hallmarks of Big O’s retail operation today. The company also began offering a full free replacement warranty – including road hazards – on some of its high-end, private brand tires. In 1968, it encouraged more dealers to join its system, when it instituted a dealer incentive program that gave them a percentage of sales within each geographical zone. In 1974, Big O came out with its own brand tire, made by Uniroyal. The new offering was an instant success, so the company continued to produce more tire lines manufactured by a variety of suppliers. Products were either continued or taken off the market based upon customer satisfaction.

With nearly 400 locations, Big O Tires, now a subsidiary of TBC Corporation, one of North America’s largest marketers of automotive replacement tires through a multi-channel strategy, is more than just a tire retailer. All of its outlets now provide basic automobile maintenance, including: brake jobs, oil changes, transmission, brake and power steering fluid replacement, other Owner’s Manual Maintenance services, wheel alignments, shock and strut installation, suspension work, battery, belt , wiper blade, headlight/taillight replacement, and radiator repairs. In addition, every time a customer comes into a Big O store for a free tire rotation or other service on purchased tires, store associates will provide a free bumper to bumper visual inspection. This courtesy may alert customers to needed repairs that are detectable by visual inspection.

In a competitive marketplace – there are over 237 million cars in the U.S., alone – how does Big O Tires maintain its market edge? According to Kormondy and Bill Ketchem, the company’s Vice President of Franchise Development, the answer lies in its franchise system. Almost every Big O Tires store is independently owned and operated, so retail customers know they are doing business with the owner. And, as Kormondy says, “Nobody is going to be as attentive to their needs as the person who owns that business.”

cleanliness and amenities. “From the street, to the parking lot, to the front door, to the showroom, wherever the customer is, we’re looking to create an appealing environment. The days of the greasy, grimy automotive repair facilities are long gone. In order to compete effectively, you’ve got to be a clean and inviting retail environment. Our customers are treated like guests in our establishments. When you combine that with highly skilled technicians and the highest quality products at a great value, you’ve got an unbeatable combination. ”

Ketchem relates that the most successful franchisees are those who follow the program and procedures set down by Big O’s corporate training agenda. Those day-to-day owners who are in front of the store and have a sales focus and customer service orientation have a leg up to succeed. And it is the company’s main goal to teach store owners how to operate and grow their franchises. Big O maintains a very strong franchise leadership group, and by frequently communicating with its franchisees, the company is able to “stay on the cutting edge and on top of key developments in the industry,” according to Kormondy.

What does the near future hold for the one of the country’s longest-established auto service franchises? Of course, Big O intends to continue its leadership role in customer satisfaction. In 2012, the company hired Barkley Inc., a Kansas City based advertising agency. Based on Barkley’s consumer research of Big O customers, it was determined that the auto service company had a Net Promoter Score (NPS), a measure that gauges overall satisfaction, of 70 – which is equal to or better than the NPS score Barkely Inc. gave to such well-known brands as Nordstrom, Apple, Google and Trader Joes!

In addition, Kormondy and Ketchem stress a continuation of company growth on two fronts: growth of the top line sales of its existing retail outlets, and growth in the total number of units that it will open in the marketplace. And, if Big O Tires can continue its outstanding record of serving loyal generations of satisfied car owners and tire buyers, the future looks bright, indeed.

Check out this handpicked feature on Midas – Trust the Midas Touch. 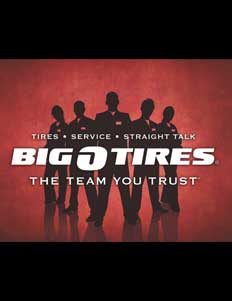