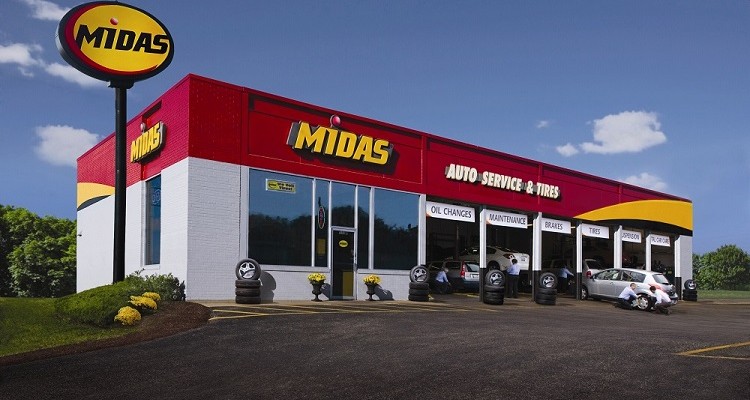 Even as a kid, there was little doubt what direction Peter Shaddock, Sr. would take with his career as an adult.

The Midas auto repair franchise is one of the world’s best-known and most-trusted brands.
It’s been a dominant force in the auto repair industry since 1956 and now boasts more than 1,000 stores in North America and more than 2,000 worldwide. And while two of the biggest questions for the owner of any new business are “How do I build my brand?” and “How do I find customers?” it’d be far more challenging to find a car owner who doesn’t know the Midas name.

Still, because the brand has been so identified with mufflers, there remains something of a challenge on the corporate level to inform customers that the services have since gone far beyond the tailpipe.

“It’s severely changed, and it’s been a tough road to get not only the consumer’s perception changed, but also our stores’ perceptions changed on moving into total car care,” said Mike Gould, who started as an auto tech in a Royal Oak, Mich. Midas shop 34 years ago, and is now the company’s executive vice president and chief operating officer. “We’ve been on that road now for about six years.”

The transition from mufflers to total car care – which, in Midas-speak, essentially means all auto services outside of major engine work – first involved the task of bolstering the in-house capabilities at all store locations to handle the new operating menu. Once the facilities and personnel were ready to go, the company focused on getting the rebranding word out with heavy TV and online advertising.

It’s an ongoing chore, according to Brant Wilson, director and senior vice president of the Midas franchise group, who said an internal survey in 2010 indicated that 24 percent of consumers were aware of the company’s total car care capabilities – compared to 50 percent now.

“I still think it’s a huge opportunity, because 50 is not nearly where we need to be,” he said. “But it shows that we’re moving the perception of the brand to indicate we’re in the total car care business. 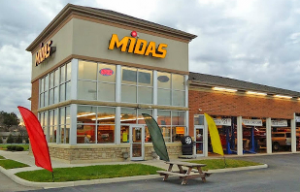 “We’re doing television and we’re spending a good amount of money on digital advertising. We’re investing quite a bit to reach the younger market in places that are skewed to younger viewership. Advertising around the brand – specifically around tires – is growing, big time. Advertising is one, but specific to the shops, doing inspections and bring awareness of what we can do is the second piece.”
Toward that end, exhaust work has actually dipped to just 10 percent of overall system-wide revenue, which is now led by brakes and followed by other services (engine repair/front-end repair). Tires, in fact, are forecast to pass exhaust for the No. 3 spot by the end of this year.

“From a growth perspective, tires are our No. 1, 2 and 3 growth product within our lineup,” Wilson said. “We still do exhaust and we’re still great at it, but it’s 10 percent of our business.

“Think of it like a typewriter. It’s just going away.”

The existing roster locations include both new buildings and ones that have been around for decades, and the company has also added locations by acquiring facilities previously used by other name-brand auto repair and converting independently-owned businesses to the Midas brand.

Shops generally include anywhere from six to 10 service bays – with eight being the most frequent arrangement – with a footprint of 5,500 square feet, though older locations might be closer to 4,000.

No matter the size and shape, though, creating a non-intimidating environment is a priority.

“Everybody uses ‘trust’ in their slogans, but I think our years of service and our consumer relations show that we really have built that trust up,” Gould said. “We believe in promoting show and tell. Educating the consumer to what their car needs today, what’s going to be right for tomorrow and what they should plan on for the future has been a huge part of our success.”

The franchise opportunity has been a recent fixture on 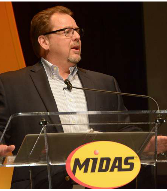 Entrepreneur ranked it third among U.S. franchises operating worldwide, trailing only 7-Eleven (No. 1) and Pizza Hut (No. 2) and being joined in the top five by Subway (No. 4) and McDonald’s (No. 5).

The general auto repair market was valued $37 billion in 2013, according to the Automotive Aftermarket Industry Association. The number is expected to grow to $39.8 billion by 2016, which means the average licensed driver in the U.S. will spend $200 a year on auto repairs/maintenance.

Minimum financial requirements for prospective franchisees include at least $75,000 in available cash and a net worth of $250,000. Startup costs range from $203,130 to $424,520 for a new shop and from $74,130 to $419,520 for an existing business joining the system.
“We have a lot more non-automotive people in our business,” Gould said. “If you’ve got a business background, we can teach you the automotive background. We have people that were senior-level management at multiple companies, who, over the years, have been brought into the system, and we have people who’ve had no business background whatsoever. If you ask me to draw a thread, I’d say that it’s hard work, dedication and perseverance that really makes a success.”

Going forward, the expectations don’t get any less lofty.

Gould said his vision for the business is to generate $1 billion in sales by 2018 from a 1,400-store roster in North America. Growing the tire and brake segments will be integral to that aim as the exhaust portion of the revenue stream becomes less and less impactful over the years.

“I clearly expect to continue the growth that we’ve had over the last 20 months,” he said.

And not surprisingly, Wilson shares the optimism.

“We have a good set of maybe 20 percent of our franchisees that are extremely growth-oriented and we’re leaning heavily on setting them up for success,” he said. “From a same-store perspective, it definitely is all about the tires. We’re keeping it very focused and very tight on purpose and picking a couple of things to run deep with over years of growth, and tires is going to be that one.”

Check out this handpicked feature on Sbarro – New York Pizza with Italian Pride. 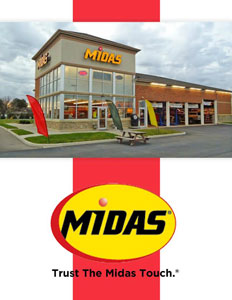