Specializing in public-private partnerships (PPP or P3), Plenary Group has a portfolio of 32 P3 infrastructure projects worth more than USD$13.5 billion across the U.S. and Canada. The company provides innovative, sustainable infrastructure solutions using their holistic approach to finance, design and construction, complementary commercial development, and the ongoing management and operation of the asset.

In North America, Plenary is the largest dedicated long-term investor, developer, and operator of P3 projects in the health, transportation, education, defence, justice, and government accommodation sectors. Brian Budden, President and CEO of Plenary Group North America, explains, “We began in North America in 2005 with the start of the Canadian P3 infrastructure market, bidding our first project in 2006 and closing it in 2007. It’s taken off from there and we’ve grown from a handful of people to more than 100, spread across primary offices in Los Angeles, Denver, Tampa, Vancouver and Toronto.”

Historically, P3s have been procured by the public sector but, more recently, there have been an increasing number of private sector applications. Plenary Group North America, for example, has recently partnered with Facebook to explore addressing growing traffic congestion along the Dumbarton Transportation Corridor in San Francisco. They are jointly advancing a project that would re-establish passenger rail service on the Dumbarton Rail Bridge across the Bay, with connections to existing commuter and inter-city rail services, enhanced and expanded bus and shared-ride options, and potential complementary bicycle and pedestrian connections. This is an encouraging example of well-positioned private parties initiating a public infrastructure project, working closely with the public sector, importing the efficiencies of the traditional P3 model.

“Most of our projects have a design, build, finance, and maintenance scope for anywhere from 20 to 50 years”, says Budden. “We maintain and lifecycle our projects and invest our own money into them for that period of time. Typically, there is a performance-based contract that requires us to rectify any issues within a set timeframe to avoid penalties. This is at our risk and cost and we work closely with select subcontractors to assume and manage these obligations.”

According to Budden, “There are different types of P3 bidders. We are a pure development player, specializing in P3s, and we structure and provide all of the required private financing. We don’t do construction ourselves. We will self-perform operations, maintenance, and lifecycle where it makes sense, particularly in the civil context, but often we’ll also contract these roles out to specialized subcontractors. One of our key differentiators from other stand-alone P3 developers is that we’re very active and get intimately involved with the design, construction, maintenance, and operations and lifecycle planning and oversight. This is in contrast to the more passive model we see from many developers under which they provide funding but no real, involved oversight or active interface and instead rely primarily on the contractors to run the project.”

The other type of P3 investor that has emerged is construction firms that look to invest into the equity of the projects they construct. While some of these groups will invest for the longer term, many plan to stay involved for a shorter period of time, selling their investment when the project reaches an operational state – something Plenary Group North America does not do. “We believe it is important to have full alignment with the infrastructure users throughout the whole project term,” says Budden, “which is why we believe in hands-on oversight. We’re focused on the long-term, and are staffed with 100 people to properly, actively manage these partnerships – we have never exited a project.”

Employee turnover isn’t an issue. A thin layer of management (one person at the top of each division that reports to Budden) means a very flat organizational structure with many opportunities for people to take on interesting and advanced work. Budden credits the positive corporate culture to “a fairly young employee base; one of the smartest collections of 30- to 40-something professionals from across a wide range of disciplines. They like to have fun and share our successes and I think they appreciate that we’re a nimble, flexible company that is always looking to innovate and be at the forefront of the industry.”

Partnerships are huge for Plenary Group North America. Before bidding on a project, time is spent choosing the right partners for construction, operations and finance, and the company has developed standing relationships with many of the largest, strongest, contractors in North America. Working with its partners, Plenary also looks to bring in local labor wherever possible. On a big project, it’s not unusual to have 1,000-plus people onsite during peak construction periods; that’s a massive, local employment initiative.

The company also believes investment in environmentally-sustainable infrastructure solutions is not only responsible, it is smart. As well as being socially responsible by reducing carbon emissions, energy-efficient infrastructure saves governments and operators money by reducing total energy and lifecycle costs. Budden reports, “Many of our projects are LEED© Gold or even Platinum Certified by the Green Building Council and we are typically very focused on energy outputs, often guaranteeing them to set, aggressive, levels. We’ve also issued “green bonds” on certain projects, where our financing has been recognized to meet set environmental criteria.”

He adds, “Looking ahead, we certainly plan to stay at the forefront of delivering infrastructure in Canada, where it’s a more mature market. At the same time, we’re seeing a lot of growth opportunities in the U.S. and believe we’re particularly well positioned for these. Many American states and municipalities are doing this for the first time, and in many cases they are exploring slightly different models – that works well for us. We have no real tick-the-box institutional requirements and, where there is a committed and realistic project sponsor, we appreciate the opportunity to be dynamic and flexible.”

The P3 sector is seeing more new deal types, beyond simple building or roads infrastructure – it might be broadband, or wireless, or have a real estate component. Plenary, for example, has projects that involve not only efficient P3 delivery of the core public infrastructure but also an offsetting of this cost through acquisition and development of ancillary real estate. And there are different types of procurements as well, especially in the U.S., where projects may not necessarily follow the more standard short-listing and fully priced RFP, with a selection and a closing soon after. Instead, projects may result from an ENA (exclusive negotiating agreement) or a PDA (project development agreement), where the core project concepts are defined but the developer, sometimes with construction or operating partners and sometimes without, are engaged early to bring the project to fruition in a way that continues to drive efficient, creative, technical and financial solutions.

Budden notes, “In Canada, there were agencies set up to advise on P3 infrastructure solutions. Infrastructure Ontario and Partnerships BC, in particular, have done an excellent job of bringing a large number of P3 projects successfully to market. It would be great if similar agencies could evolve in the States but this is difficult because the U.S. is so diverse, geographically and politically. In the absence of dedicated agencies, what we really need is strong representation on the public side – a champion – who wants to advance the project; somebody with the ability to understand what is involved in a public-private partnership, and with an openness to sit down and work out exactly how it should best proceed. As more governments explore P3 delivery and as we see a growing number of successful P3 procurements, we expect the model will continue to gain traction in the U.S. and we’re excited to be part of that evolution.”

WHAT: Investor, developer and manager of public infrastructure

WHERE: U.S. and Canada

Fasken is a trusted advisor to Plenary Group on many of its preeminent North American projects. Fasken’s Infrastructure & PPP Group is at the forefront of infrastructure and PPP development and finance in North America. We have a proven track record of successfully closing complex projects in North America, acting for project developers, consortia, constructors, underwriters, lenders and procuring authorities. 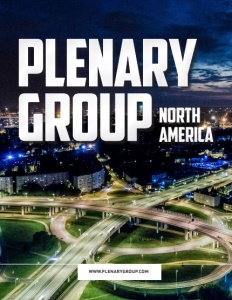