Business View Magazine interviews representatives of Page Municipal Airport and the City of Page, Arizona for our focus on U.S. Regional Airports

The City of Page, Arizona may best be described as beauty on parade. It is exactly what you imagine Arizona to be in your mind’s eye – beautiful red rock mesas and layered stone valleys with cool water winding through it.

“Page is beautiful – plain and simple,” begins Gregg Martinez, Economic Development Coordinator for the City of Page. “Uniquely beautiful… it’s almost like flying into Mars, but Mars has a great big lake. We are at a higher elevation, so there is a different feel to the desert here. When you think of the Arizona desert you are probably thinking of Death Valley or Phoenix, but those places are at sea level. We are about 4300 feet up and so the sky is a little bit crisper, the blue is a little bluer, and then the contrast of the blue sky with the orange and red rocks is just a sight to behold. I am pretty sure that when pilots are approaching our airport, they find it hard to concentrate on the runway because of how much glorious beauty is around them.”

Beyond its natural glory, Page is an interesting place for several reasons, not least of which is the history. Page is the closest city to the Glen Canyon Dam, a massive hydropower facility built from the mid-1950s to the mid-’60s. There is a reason for that. Page was founded in 1957 as a housing community for workers and their families during the construction. It was a 17 square mile site obtained in a land exchange with the Navajo Nation. The city is perched atop Manson Mesa and was originally, and uninspiringly called, Government Camp, but was later renamed for John C. Page, commissioner of the Bureau of Reclamation. In 1975, Page was incorporated and became the gateway to the Glen Canyon National Recreation Area and Lake Powell, the second-largest manmade lake in the United States. The lake, created as a result of the dam, is now a popular tourist destination attracting more than three million visitors per year.

More recently Antelope Canyon was opened to tourism on Navajo land, as was the Horseshoe Bend Overlook – adding to tourism and popularity. The online performance of David Blaine, a street magician with breath-holding records who ascended from Page using 50 helium balloons to a height of 25,000 feet before skydiving back to the Mesa, made the headlines. This was the most-watched live event on YouTube has now been seen by some 25 million people worldwide, and has helped spread the word about the City of Page. 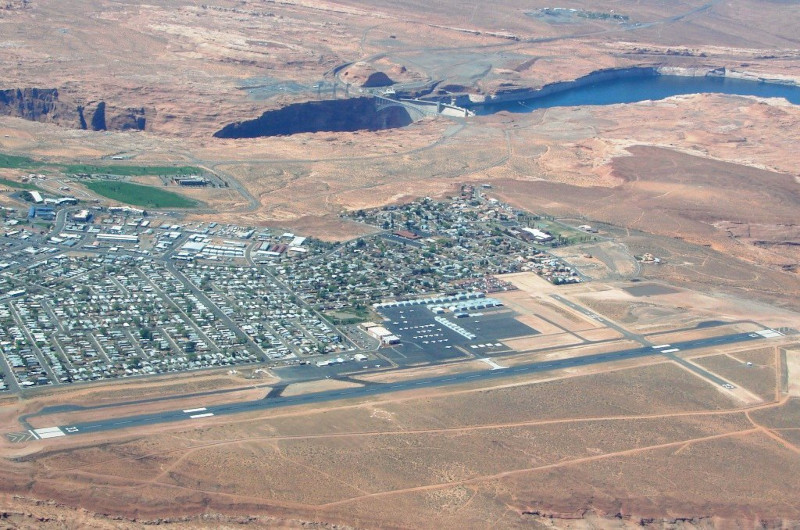 Also of note, is an ultra-high-end resort, Amangiri, on Lake Powell at the crossroads of Utah, Arizona, Colorado, and New Mexico. The resort charges some $4000 per night for an all-inclusive desert spa getaway – and uses Page Municipal Airport as its gateway. There is no doubt that the airport serves as a vital economic engine for the City of Page and Coconino County.

According to Martinez, “One of the key things that have changed in terms of the airport is that the city has managed to procure an alternative essential air service provider with Contour Airlines. This reduced a barrier to access, since we are about four hours away from Phoenix, which is the nearest metropolitan area by car. Contour operates a 30-passenger jet service that cuts the travel time to 41 minutes and charges under $50. It has had a huge impact on tourism but also on personal commuting. It is possible to live here and work there.”

“That is definitely true,” chimes in Kyle Christiansen, Airport Director/Public Works Director for the City of Page. “We used to have a smaller prop commercial service operator that did OK, but Contour brought a lot of people to the community for tourism and allowed us, as residents, to be able to access the state capital for business meetings or what have you. We have also seen a small uptick in charter operations over the last couple of years.”

Page Municipal Airport was officially named the “Royce K Knight Field” on July 14, 1988, in recognition of the man who started the airport during the construction of the Glen Canyon Dam. Knight also ran the FBO and offered scenic flights over the Grand Canyon and Lake Powell areas. The 536-acre property has two runways: 15-33 at 5,950 feet in length; and crosswind runway 07-25 at 2,200 feet. The Airport is served by three FBOs: American Aviation, Classic Aviation, and Lake Powell Jet Center. They offer fuel line services and have several mechanics, charter services, and even occasionally do flight training. Charter service and air tours of the Grand Circle are provided by American Aviation, Grand Canyon Airlines, and Westwind Aviation.

“We have 88 based aircraft at the airport,” says Christiansen, “most are turboprop, but we have a few helicopters based here, as well. We see corporate G650s coming in during the summer and we have even landed an Airbus. We do not own any hangars outright, but several private owners build on a land-lease agreement. As the area is growing people are asking me every week if there is hangar space available, but to be honest, any that does come available is snatched right up. A gentleman recently built five new hangars and they were sold out as quickly as they were built.” 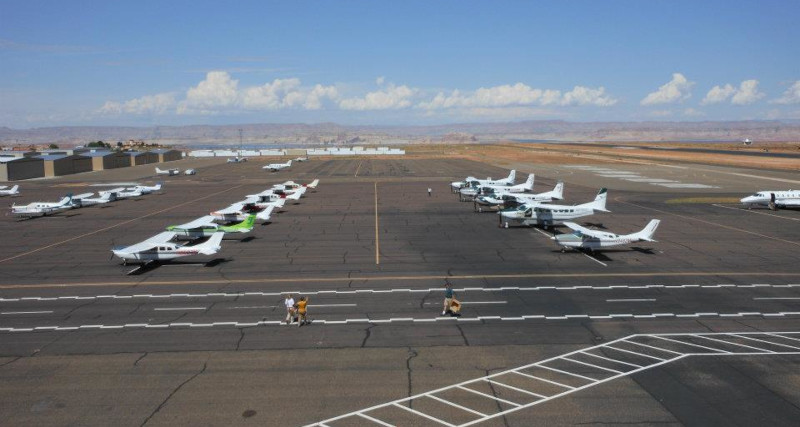 The airport’s 10,000 square foot main terminal houses the commercial service operator, Contour Airlines, along with the TSA screening facility and Avis Car Rental. One of the FBOs, American Aviation also works out of the terminal and has a maintenance hangar next door. Christiansen adds, We also house Grand Canyon Airlines, which offers fixed wings tours and Papillion Helicopter Tours. The airport only has three full-time staff, but we provide seven days a week coverage.”

Another interesting tenant on the airfield is Monumental Weddings. They are a wedding photographer and venue planner and will take groups out to incredibly scenic places, on top of Tower Butte or a remote Mesa. They set everything up, fly the wedding party in, and they also have approval from the Navajo Nation to operate in Horseshoe Bend. There is a also a realtor, Majestic Homes, that enjoys operating from the airport, as well.

Infrastructure projects are always top of mind at Page Municipal. “We have been working on improving the infrastructure slowly over the last few years,” says Christiansen, “and have just recently completed a $2.5 million apron reconstruction of the main apron. It was a strengthening project and we reconstructed nearly the entire north apron and the commercial apron to allow for heavier aircraft. In the last few years, we have updated our Taxiway Charlie, which is our partial taxiway to our crosswind runway, and currently we’re in the process of preparing grant applications for some runway safety improvements, lengthening and strengthening it as well, to allow more types of aircraft to use this airport.”

Martinez and Christiansen go on to describe how there has been a big push recently in the City of Page with respect to internet connectivity and broadband availability. Many rural communities struggle with connectivity, but Page has been pushing and managed to get a direct fiber-optic line coming in from Southern Utah, with another coming from New Mexico, and another being built from Flagstaff. They have created three-time redundancy and are now swimming in bandwidth.

In a nod to dreams and aspirations for the region and Page Municipal Airport, Christiansen shares, “We have already become a player in terms of international travel. Contour is partnered with American Airlines and that means you can basically book a flight anywhere in the world, leaving Page, flying to Phoenix, and then beyond. And no matter where you are in the world, you can get a flight booking with American right to our airport. So, we are on the map, so to speak.”

Perhaps the future is in the stars for Page Municipal – but for right now, they are comfortably serving as the gateway to the beauty of the desert, and that suits them just fine.

What: A scenic, commercial and general aviation airport

Where: The City of Page in beautiful Coconino  County, Arizona

A Page Worth Revisiting

For adventurers looking to venture beyond the Grand Canyon, there’s a place that holds its own list of must-see and must-experience destinations: Page, Arizona.

Page is perhaps best known as being home to one of the most Instagrammable spots in the world: Horseshoe Bend, featuring a shimmering blue u-shaped ribbon of the Colorado River cutting through red-rock canyon cliffs. Less known is the 11-mile continuous Rim Trail in Page. With views of red rocks and blue water, this hike will provide more than enough photo-ops.

There’s more to love about Page if you’re looking for that perfect photo. The area is home to a network of slot canyons and narrow trails that wind their way through wildly wavy rock formations. The most popular is Lower & Upper Antelope Canyon. Another great slot canyon trail is called Buckskin Gulch and it provides one of the southwest’s longest and deepest canyon experience.

When it’s time to shake the dust off your boots from all the outdoor fun, Lake Powell is where you want to be. The best way to see the Lake is by watercraft. Rent a kayak, powerboat, pontoon boat, or even a houseboat- or simply zip around for a while on the back of a Jet Ski. How about a float trip down the Colorado River? Half-day trips from Page to Lee’s Ferry, are available through Wilderness Adventure Company.

Want even more? Make Page your Basecamp and do daytrips to the Grand Canyon, Monument Valley, Zion National Park, and Bryce National Park- new in 2022! Come to Page to experience the world-famous Wave. The Wave is the premier photographic destination in the southwest. Located in Coyote Buttes, it is just a 30-minute drive from Page.

After all your adventures, be sure to make it back to Page’s downtown. Enjoy a beer at the new Grand Canyon Brewery, elevated dining at Rim View Terrace, or a movie in the park. Page has over 20 hotels to accommodate you and your family. From family-affordable, to spoiling yourself, Page’s hotels have something for everyone. Page is home to many mom & pop family-owned small business. From our one-of-a-kind donut shop to the Sugar Factory, your family will love their time in Page, Arizona.

When you’re making your Arizona itinerary bookmark Page as your top destination. Best time to visit is Spring, Summer, and Fall!