Lansing, Illinois – A community on the move

A community on the move

Business View Magazine interviews representatives from the Village of Lansing, Illinois, as part of our focus on best practices of American towns and cities.

Lansing, Illinois, a village in Cook County, is a southern suburb of Chicago. It was first settled in the mid- 1800s, primarily by Dutch and German immigrants who came to the area to build homes, farms, and businesses. In the late 19th century, brickyards dominated Lansing’s economy, and the Village supplied much of the brick to rebuild Chicago after the Chicago Fire of 1871. While onions, tomatoes, beets, spinach, and cabbage were common crops grown on its farms, it was onions that were most prominent; the suburban Chicago area supplied 80 percent of the country’s onion sets in the 1930s and 1940s.

Aviation is also a significant part of Lansing’s history. The Ford Hangar at the Lansing Municipal Airport is a permanent reminder of an era when air travel was still in its infancy. Built for Henry Ford and designed by renowned architect Albert Kahn, the hangar was built to house Ford’s tri-motor plane using a cantilevered construction method. The hangar was added to the National Register of Historic Places in 1985.

Lansing’s current population is approximately 30,000 and today, in addition to being a bedroom community of Chicago, the Village has a significant retail base, and is also home to some light manufacturing and distribution companies. The Village has a viable downtown with lots of old shops and the newly completed Park Plaza, located on the site of an old railroad line at the southwest corner of Ridge Road, the Village’s main thoroughfare, and Burnham Avenue, that hosts a farmers’ market during summer months.

Recently, Lansing has embarked upon several redevelopment projects, which, according to Village Manager, Dan Podgorski, are designed to be “destination drivers; something to bring people, not just Lansing residents, but people outside of Lansing to our community.” The most prominent among them is an outdoor concert venue called Fox Pointe. “It’s being developed on a site that used to house a business called Fox Home Lumber,” Podgorski continues. “When the Village purchased that old rail line, we also acquired that piece of property that Fox Home Lumber used to operate on. We turned down other proposals to develop it, because we felt it was going to be significant to the future redevelopment of downtown. It was such a significant piece of property – it’s only a few acres, but it was right in the heart of our downtown, and we felt it was going to have significant municipal value as some sort of a gathering place, and that’s what it turned into. In the last several years, there’s been an Autumn Festival that’s developed in that area, and the last administration adopted some plans to turn it into a concert venue. Plans were drawn, bids were awarded, and contracts signed.”

A $5 million project, Fox Pointe began construction in June 2017, and should be completed in time for the Village’s traditional Autumn Fest, this year. The venue includes an outdoor amphitheater, an open air pavilion, a concessions building, and bathrooms. The pavilion will be able to hold 250-plus people, and the amphitheater will accommodate over 2,000 in a lawn-type setting. “It’s probably the most significant investment the Village has made in redeveloping a piece of our own property for the benefit of our residents and, what we hope will be, increased attraction to businesses in our downtown area,” Podgorski explains.

“People will come here and enjoy the concerts and other performances that we expect to have and then, hopefully, they’re going to eat in our restaurants and they’re going to stay in our hotels and stop for a drink or two in some of our bars,” he adds. “We’re also hoping that this is going to be the type of driver that’s going to appeal to entrepreneurs; we’re hoping to attract additional restaurateurs and maybe some micro-brewery and wine bar type owners to bring their businesses to our downtown.”

Another project on the Village’s agenda is the repurposing of an old landfill site. “It’s attracted the attention of a developer, and we’re looking at converting this old landfill into a usable green space as part of a large economic development project,” Podgorski says. Finally, there is the old Ford Hangar at the Lansing Municipal Airport that has been used, in the past, for some city events. “It’s our goal to get that historic building removed from the footprint of the airport, so we can use it as a venue for things such as weddings, concerts, and conventions,” says Mayor Patty Eidam. “We have high hopes for it.”

“We’re trying to create two or three destination drivers that Lansing has never had on two or three different sites: Fox Pointe, our Municipal Airport, and the sustainable green project at the old landfill,” says Podgorski. “We haven’t had that driver that brings people from outside the community here, and that’s what we’re looking to do – refresh and reinvent ourselves. If we’re able to develop even two out of these three destinations and drivers, we can position ourselves to the point where we can give our residents something to crow about, but also have something that we can market to people outside of Lansing to bring them here.”

“It’s a combination of creating new traditions, but also remembering and honoring the ones that we’ve always had,” says Ken Reynolds, Mayor Eidam’s Executive Assistant and Director of Communications for the Village. “One thing we have in our community is solid tradition, and former residents keep coming back to Lansing for the community events that we have. One of the things the mayor campaigned on was bringing back the tradition in Lansing of the Santa Claus House. It was a tradition in our community for 30 or 40 years or more, but over the last couple of years, it disappeared; the Santa House was taken down and was leveled. So, a lot of our residents wanted to see that come back. We were able, through a volunteer project in the community and donations from many of our civic groups and individuals, to re-establish and rebuild a brand new Santa Claus House on property just north of the Fox Pointe.”

Combining the old and the new, with an eye toward providing more amenities for both residents and visitors, Lansing, Illinois is a community on the move.

Check out this handpicked feature on The Bartow Municipal Airport – A history of pilot training. 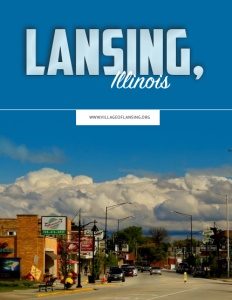