Dignity Health Sports Park, home of the 5-time MLS Cup Champion LA Galaxy and home to the newly relocated Los Angeles Chargers, is southern California’s venue for world-class competition and training facilities for amateur, Olympic, collegiate, and professional athletes. Owned and operated by AEG (Anschutz Entertainment Group), the $150 million, privately-financed facility was developed on a 125-acre site on the campus of California State University, Dominguez Hills (CSUDH) in Carson, California and opened in 2003.

Dignity Health Sports Park is also home to the United States Tennis Association’s (USTA) High-Performance Training Center, the national team training headquarters for the U.S. Soccer Federation (USSF), and EXOS, an international training center for elite and professional athletes. The Sports Park has 18 tennis courts, 11 practice fields, and a three-mile jogging trail with 12 fitness stations around the perimeter of the development, all of which are available for use by the greater Carson community. 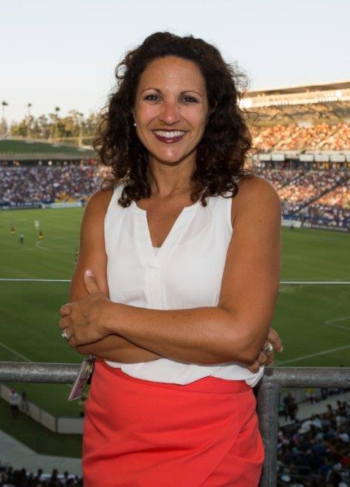 “The Galaxy was one of ten original teams in Major League Soccer when the league started in 1996,” says the Sports Park’s General Manager, Katie Pandolfo. “Back then, the owners looked at the league and decided that one key to success was to build soccer-specific stadiums; a number of the teams were playing in football stadiums that were way too large for the fan base at that time. To be successful, it was best to own and operate your own venue and not be a tenant. So, in 1999, the Columbus Crew opened the very first soccer-specific stadium and in 2003, we opened what was then called the Home Depot Center, as the second soccer-specific stadium in MLS.  In the spring of 2003 the LA Galaxy moved out of the Rose Bowl in Pasadena and into their new home in Carson.”

“Building a soccer-specific stadium for the Galaxy was the primary focus, but our ownership also recognized that our Olympic and collegiate athletes needed a state-of-the-art complex to train which led to building of the entire complex on the campus of Cal State Dominguez Hills,” Pandolfo adds. Thus, Dignity Health Sports Park has many different venues and amenities housed within the complex, including an 8,000-seat tennis stadium, a 27,000-seat stadium for soccer, football, and other athletic competitions and outdoor concerts, a 2,000-seat facility for track & field, and a 2,450-seat indoor Velodrome – the VELO Sports Center – for track cycling.

In 2017, to accommodate the Chargers’ use of the venue, a number of upgrades were made to the stadium. Those upgrades included new tip-up seats in the mezzanine, bleachers added to the grass berm, and a new section of upper-level bleachers, which seat 330, were erected in the southeast corner of the stadium. Additionally, the luxury suites were renovated with new seats, furniture, community tables, and engineered hardwood floors, and the press box underwent an upgrade with a third row added to the main box, boosting capacity from about 35 to 53. Floors were constructed on the roof of the luxury suites to accommodate an auxiliary press box on both sides of the main box.

Two new radio booths were built outside the south side of the press box, and a large new booth on the north side which serves as a security command post for police and NFL officials was constructed.  To accommodate 53-man NFL rosters, four small locker rooms were converted to two larger ones with 60 lockers in each. Also renovated were small postgame news conference rooms for each team and rooms for game officials and the chain gang.

Since opening, Dignity Health Sports Park has hosted some of the most elite national and international competitions in the world. In the facility’s first year of operation, it hosted the 2003 MLS All-Star Game and the 2003 FIFA Women’s World Cup championship match. It hosted the MLS Cup in 2003, 2004, 2008, 2011, 2012, and 2014, and the NCAA Men’s College Cup in 2004. It has hosted other major soccer tournaments and matches, including the qualifying for the prestigious Copa Libertadores – InterLiga, SuperLiga, CONCACAF Men’s & Women’s Gold Cup matches, and the World Series of Football. It also hosted the LA Women’s Tennis Championships and a Tier II WTA Tour event, showcasing tennis’ most elite female athletes. The facility also hosted the UCI Track Cycling World Cup Classics in 2005-2007. In 2005, the Sports Park’s track played host to the USA Outdoor Track and Field Championship, and from 2010 to 2016, it hosted the Reebok CrossFit Games.

“Because of our location, our facility is in demand year-round,” notes Pandolfo. “We also host a number of community-based events, such as the California High School Championships and the NFL Players Association game. We host 15-20 junior high, high school, and college commencements during the month of June in our tennis stadium, and we have concerts in the tennis stadium and soccer stadium. Outdoor boxing is also really big here; we’ll host at least a half dozen boxing events annually that are broadcast on a number of outlets such as Showtime, NBC or DAZN, which is a new streaming service whose content includes a number of professional sports. The campus is always busy. We’ll have between 80-100 ticketed events per year, and I can’t even count the number of trainings on all the fields and courts – on a daily basis, we’ll have 250 athletes who will come here to train.” In fact, this past July, Dignity Health Sports Park completed a record-setting week, as the facility hosted eight major sporting events, including five sold-out professional soccer matches, while welcoming over 100,000 guests and accommodating over 350 professional athletes during a nine-day span.

Over the next several years, the Sports Park will play host to several prestigious events, beginning in 2022, when Super Bowl LVI will be held in Los Angeles. “We are being considered as a host site for ancillary events,” says Pandolfo. “As we look further ahead, North America was granted the bid for the World Cup and Los Angeles will be one of the host cities in 2026. We won’t host an actual match, but we will be a practice facility for any number of countries that use Los Angeles as their home base. In 2028 the Summer Olympics will return to Los Angeles for the third time, and our facility will be home to five events: tennis, cycling, field hockey, rugby, and the modern Pentathlon.” 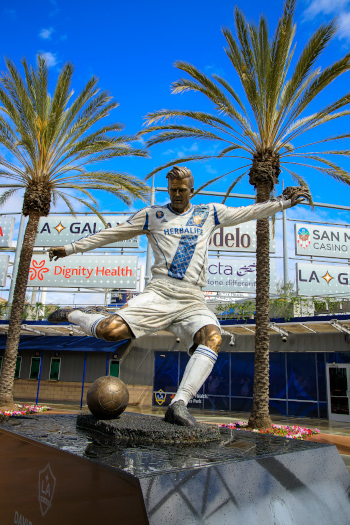 As is the case with most stadiums and venues, these days, the Sports Park has found it necessary to update its ability to satisfy cell phone users when they are on property. “A couple of years ago, we partnered with Mobilitie, a global provider of complete wireless solutions, who installed a high-density DAS, which provides optimal coverage and capacity for all wireless carriers,” Pandolfo explains. “People just wanted their phones to work and they want it to be simple, so we listened to that. We looked at options to  install Wi-Fi, but it didn’t make sense in this stadium; it made more sense to make sure that all of our cell carriers had the best service that we could possibly give guests, so when people came in the venue, they could stream, they could post, they could Facebook, their tickets worked, their mobile parking worked, their Apple Pay worked. We made sure that we had a state-of-the-art DAS system so that people’s phones just worked and they didn’t need to go through the hurdles of authentication. We learned that if people had to authenticate three, four, or five times in order to get onto a Wi-Fi system, that it usually didn’t make them too happy. We see working phones as a tool that helps guests get in the building faster, helps us sell merchandise and food faster, helps them get to their seats faster. And the faster that people can post wonderful things about the event that they’re at, the happier it makes all of us.”

Dignity Health Sports Park is a leader in sustainability and has a number of “green” initiatives, with a focus on saving energy and water, recycling, and purchasing environmentally preferable products. It has irrigated its fields and landscaping with recycled water since opening in 2003, installed waterless urinals and faucet aerators to reduce water consumption, and in 2016, became the first soccer-specific MLS stadium to install LED sports lighting and the first stadium in the world to install a battery-based, energy storage system. “We have a Tesla battery pack attached to our stadium to offset a portion of our peak power,” Pandolfo explains. “The battery operates whenever we have peak power demands. It charges at night, when the demand and price of power is not that great, and it’s discharged during the day to offset the demand from Edison.”

The Sports Park also built a greenhouse, a chicken coop, and a bee farm to grow local produce that can be used onsite. “We have a Galaxy Garden here, too,” Pandolfo adds. “We allow our staff to have a garden box so they can grow their own food. We have a number of players who also have boxes in our garden.

“At the beginning of the year we launched a new partnership with the San Francisco based company Copia, whose mission is to make healthy food more accessible to people in the community by helping businesses redistribute high-quality excess food to feed people in need.  After every major event, we utilize Copia’s app-based technology to send excess food to local non-profits to help feed the needy. For any food or food scraps that can’t be consumed or donated, we utilize an on-site ORCA Digester which is an innovative food waste solution. The ORCA churns the food, which mimics a natural digestion process, until it comes out in liquid form into a sewer line, so it doesn’t have to go into a dumpster and then on a truck to be hauled away; it’s an economical way of eliminating food waste, and it’s also a lot more earth-friendly. We try and use as many things that we can that are fully compostable, but we do have a recycling program for all of our events.”

“We’re a world-class Sports Park,” says Pandolfo, in conclusion, “with high-level, professional athletes and people aspiring to be professional athletes. Dignity Health is a new partner that came onboard this past January. They’re a phenomenal healthcare company that has expanded to Los Angeles in recent years. Their big push is wellness, which fits in line very nicely with what we do: building character through competition.”

WHAT: A venue for world-class athletic competition and training

Dignity Health Southern California’s six hospitals have one common goal: to provide compassionate, high-quality health care in a safe and healing environment. Our acute care, nonprofit hospitals provide services in Los Angeles, Glendale, Northridge, Long Beach, and San Bernardino and are an important part of our commitment to humankindness. In caring for our patients, we respect the dignity of each individual and strive to meet the needs of the whole person.

All of the Dignity Health Southern California facilities are recognized for clinical excellence, safety, premier surgical services, advanced imaging centers, outpatient services, comprehensive home health services, and a wide range of community benefit programs. A key element of our mission is to support the health of our communities in impactful, measurable ways.

We are also proud to offer unique hospital-based programs like spiritual care, music ministry, and pet therapy, which are proven to reduce stress and promote healing and humankindness.