Granite Transformations: Done in a Day, Beautiful for Life

When Paul Lane uses the phrase “global franchise,” he really means it.

In fact, the company for which he is now chief operating officer – Granite Transformations – can trace its roots back across two decades while covering more than 15,000 miles along the way.

The journey began in 1996, when founder Colin Mackenzie happened upon a thin composite tile product at an Australian trade show that he felt could be useful as an overlay on kitchen and bathroom countertops, though its predominant use had been for flooring. The product’s composition allowed it to be installed in 10-foot slabs over existing countertops, without seams or grout.
A factory to produce the engineered stone was built in Italy in 1999 to serve the burgeoning Australian and neighboring New Zealand markets, and the initial venture into the United States was made two years later with the opening of a franchised location in Mira Loma, Calif. Within another several years, franchises were being opened in the United Kingdom; and the Italian plant, which was nearing its full capacity, was closed in favor of a new manufacturing facility in Sebring, Fla. 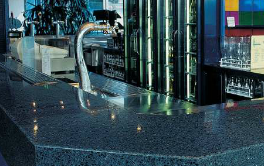 The Sebring plant now produces and exports slab material to all of the company’s 160 global markets, and Granite Transformations’ North American corporate headquarters – which oversees 65 franchises in the United States and 11 more in Canada – is 150 miles south in the Miami suburb of Miramar.

“We’re not just a franchise company. We own the manufacturing component. We own the entire chain, from soup to nuts,” Lane said. “From planting a flower seed all the way up to making a sandwich, we cover it all. That’s rare in our industry. Most of them, you’re either a manufacturer or you’re a fabricator/installer. We’ve blended it all into one component.”

The corporate apparatus still owns three locations (two in Florida, one in California), and one more company store in each state, Lane said, should be opened by the midway point of 2015. The reasons for maintaining a stake, he said, include both maintaining the ability to relate to issues faced by franchise owners, and using the corporate units as a developmental laboratory for would-be owners.

“We really want to walk a mile in their shoes. We want to understand the challenges of running a franchise. We want to understand how we can improve the franchise system,” Lane said. “To be a good franchisor, you need to own a franchise yourself. Kitchen and bath remodeling is not as simple as operating a yogurt franchise or even a pizza franchise or a service franchise. When you get into that space in somebody’s home, no two homes are alike – so the more experience they can gain either through our training process or through actually managing is more of a benefit to their success.”

The company is most represented in the Northeast and Mid-Atlantic regions of the U.S., Lane said, though he estimated the overall domestic presence hovers somewhere around 30 percent of potential capacity. Four new franchise openings are scheduled in the first six months of 2015, and myriad factors – mapping software, data purchased from Experian, etc. – are used to identify target markets.
Ideal target areas typically include a density of at least 100,000 houses, and target customers are usually those aged 45 years or older, who are also savers and would be most likely to see the value in a product’s lifetime warranty and in a process that involves installation, not demolition.

“We know what our key demographics are and we’re in the process of mapping out those areas that have pockets of our key demographics, where we’re very confident that a franchise can be successful based on similar market comparisons,” he said. “We’re doing a lot less of a shotgun approach, and more of a sniper approach to our growth. Certainly more strategy behind our growth.”

These days, stage one of the Granite Transformations franchise cycle involves 1,800 to 2,000 square feet of building space, while the more evolved units have moved into 4,000 to 5,000 square feet with a showroom. Finished product is shipped in crates from the plant in Sebring to the individual locations as ordered, which represents a departure from days when franchise owners were expected to fabricate products after receiving raw materials from the manufacturing facility.

The majority of the franchise roster, Lane said, now includes medium- to large-sized locations, many of which have been part of the organization since a prodigious growth spurt that coincided with the pre-recession building boom. Still, he said, the ornate showrooms aren’t always as important as the one-on-one relationships that are built between the design consultants and the homeowners.

“It’s really an in-home process, for the most part,” Lane said. “That’s one of the learning curves that you go through, so we put less emphasis on having a grand showroom. Over the next year to two years, you’ll see an increased rate of a smaller, more compact, but a very nice showroom.”

Roughly 75 percent of company revenue comes from work on kitchen countertops and backsplashes, while the remaining 25 percent is split between bathroom remodeling/renovation/resurfacing and cabinet refacing. Cabinet refacing is still an optional program for franchisees, he said, and bathroom remodeling remains relatively new, becoming a primary focus for the franchise about four years ago.

A common denominator for successful franchise 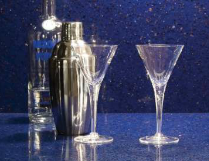 operators, Lane said, has been a transition to Granite Transformations ownership from a previous career as a mid- to high-level manager or executive in corporate America; particularly those people who are organized, have an understanding of how to run a business and a grasp of the importance of establishing an in-house culture.

Documented prowess with a hammer and nails, in fact, is not at all a prerequisite.

“You don’t need any experience with tools. You don’t need to have that background. As a matter of fact, that’s not the skill set we look for,” he said. “We wouldn’t go to a countertop company or a granite company and say ‘We want to convert you.’ We would rather have somebody with business acumen, and we can teach them the skill sets required. When it comes to marketing and sales and finances, those sorts of things require a little bit more cerebral processes.”

In terms of infrastructure, a “One Company, One World” marketing initiative – through a partnership with FutureBrand – has been launched to create more cohesion between the far-flung franchise operations, as well as with international sister companies in the mosaic tile business. Because the brands intermingle at various points in their processes, the aim is to being them under one umbrella. That could mean a unifying corporate name change, Lane said, but that’s not yet been finalized.

What is locked in, however, is a vision for 50 new North American franchises within the next five years, alongside a plan to open at least two corporate stores per year in that time frame. Other top agenda items, he said, include centralized manufacturing, automated processes, possible construction of a manufacturing facility to service the West Coast and completion of a centralized call center.

The aims are equally high around the globe, too.

“I would see probably in the neighborhood of 35 to 40 franchises throughout the U.K., and also moving back into Europe into countries like Germany,” he said. “We’re also starting a Brazilian operation where we’ll be offering the franchises, and you will likely see one to two more franchise brands from our company in the spaces we’re already in. We’ll be very busy.” 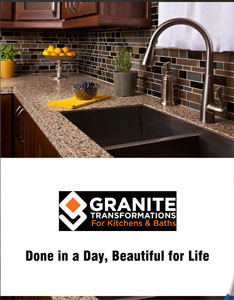