Part of the family

Edward Arnold Scrap Processors Inc. was founded by Edward Arnold Sr. and Darlyn Arnold in 1956. “My father started out with the pickup truck, going around and picking up scrap,” says Edward Arnold Jr., Company Vice President. “They bought the property where we’re at now in Corfu, New York when it was all farmland. He did a lot of work with the railroads. He would go and clean up scrap from derailments and bring it back to the yard. He would process that scrap and he just kept stockpiling and selling it.”

Today, Ed Arnold Scrap employs 72 people and offers its services to individuals and businesses across the Northeastern U.S. “From Cleveland, Ohio to Watertown, New York, to Pittsburgh, Pennsylvania,” notes Arnold. “We handle Fortune 500 companies like General Motors and Ford, down to small machine shops, collision shops, and stamping plants; and then we go down to what we call our peddlers, which are people that make a full-time job of going around with a pickup truck, kind of like how my father started, picking up scrap and bringing it in.”

With 25 trucks on the road, Edward Arnold Scrap Processors’ services include: dump trailers, flatbeds, van trailers, and roll-off containers from 10 to 80 yards. A roll-off is an open top dumpster characterized by a rectangular footprint, utilizing wheels to facilitate rolling the dumpster in place. The container is designed to be transported by special roll-off trucks. Roll-offs are commonly used to contain loads of construction and demolition waste. The company also provides roller bins with valves that allow customers to recover fluids that are essential to their business.

Regarding those roll-offs, Arnold says that when the company first acquired them, it became a way in which to counter the negative image that some held about the scrap business. “We got them all painted, and put our name and phone number on them,” he recounts. “A lot of people in the industry just have rusty old pieces sitting outside the place that you throw scrap into.” According to Arnold, that unwarranted opinion about the scrap business also redounded to its owner: Arnold Sr. used to be considered the “junk man.” But as recycling started to become more fashionable, people’s attitudes changed, and other businesspeople began reshaping their notions about the scrap industry and its environmental benefits. “Everybody had always looked at the scrap dealer like Sanford & Son. All of a sudden, we were looked upon a little differently than before,” says Arnold.

In fact, just this past September, the company’s recycling efforts received not opprobrium, but rather affirmation when it received an award from the GLOW Region Solid Waste Management Committee,  formed in 1987 by the counties of Genesee, Livingston, Orleans, and Wyoming that read, “In appreciation for contributions toward regional recycling efforts and assistance given to GLOW Solid Waste through the years.”

Indeed, Ed Arnold Scrap always looks for new ways to recycle and keep the environment clean. A new type of product it has begun to recycle is electronic waste, which has become a major concern to the environment. So now, it accepts all types of electronic equipment: circuit boards, televisions & monitors, computers, peripherals, etc.

Arnold believes that being a family-owned business is a competitive advantage. “The scrap industry used to be made up of family businesses,” he explains. “About 15-20 years ago, there was a lot of consolidation and the family businesses sold out to bigger scrap processing operations. We’re one of the few family operations left up in Western New York. So, we treat people more like family and the way we would want to be treated. It’s that personal touch that we give to the customer.” “My father still shakes every customer’s hand that comes in here,” adds Arnold’s sister, Denise, the  Assistant Secretary/Treasurer.

Last year, Arnold says the Company purchased another scrap operation that it is currently working into the system, and adds that over the next year, there might be two more acquisitions and the possible addition of another automobile shredder. Meanwhile, with Arnold’s daughter joining the firm, the third generation of this venerable family business in upstate New York will continue shaking its customers’ hands. “We don’t look at our customers as a profit center,” says Arnold. “They’re an integral part of what we do, and we want to be an integral part of what their business does. So, our number one goal is to take care of our vendors and our employees and make sure that they know they’re part of the family.”

WHAT: A processor of ferrous and non-ferrous materials 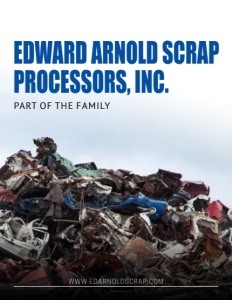