Business View Magazine interviews Chris Castro, Director of Sustainability, City of Orlando, as part of our focus on green initiatives of city governments.

The City of Orlando, Florida (population 282,000) thrives as a resort hub of social and recreational activity, welcoming thousands of tourists every day, and boasting a business climate as attractive as the gorgeous weather. But it’s not all sunshine… such an influx of people on a daily basis poses significant challenges to infrastructure and environmental sustainability. Fortunately, Orlando Mayor Buddy Dyer is a forward-thinking champion of all things green who, along with like-minded city and community representatives, believes in partnering with the best in the field to initiate ground-breaking initiatives such as Green Works Orlando. 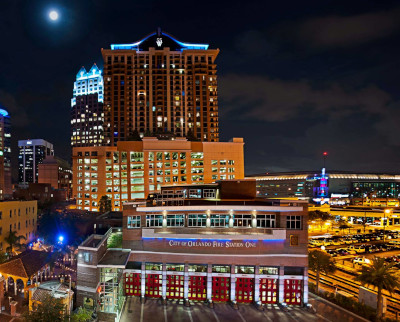 Business View Magazine recently spoke with Chris Castro, Director of Sustainability for the City of Orlando, about Green Works and the innovative solutions that are making the City a sustainability role model across the nation. The following is an edited transcript of that conversation.

BVM: Orlando faces very interesting problems from a sustainability perspective. With so many people using the infrastructure, how are you addressing those challenges?

Castro: “We had 72 million tourists in Orlando in 2017 – a five percent growth in tourism over the last year. For every resident there are upward of 245 tourists that visit our city. That’s a big reason for the establishment of Green Works Orlando, which is our comprehensive sustainability initiative. This has been around since 2007, when Mayor Dyer had the foresight that for us to be a thriving city in the 21st century, a city that attracts a creative class while remaining one of the best for people to live, work, learn, play, and raise a family in, it’s imperative to integrate sustainability into all aspects of Orlando.

“The thought process behind Green Works, in addition to being one of the greenest cities in the country, is ensuring we are socially inclusive, economically vibrant, and environmentally sustainable. We often say we’re following the triple bottom line of: people, planet, and prosperity. Green Works looks at seven key focus areas: clean energy, green buildings, local food systems, livability, solid waste, water resources, and transportation.”

BVM: What is the ‘Beyond 34’ initiative?

Castro: “With millions of visitors coming to our city, producing about a ton of waste per person, we had to figure out what to do with all that waste; how to create a circular and regenerative economy that uses waste in the economic stream. So, we’ve had a goal since the inception of Green Works of being a zero-waste community -diverting 100 percent of our waste from the landfill.

“Mayor Dyer has really charged us with thinking creatively. We launched a single-stream recycling program a long time ago, one of the first in the country, where people can put all their recyclables in one can. We’ve also rolled out a number of public space recycling options. ‘Beyond 34’ came out in 2017, when the U.S. Chamber of Commerce expressed interest in partnering with Orlando to be the pilot for creating a regional sustainable waste management community – a model that other cities can replicate to achieve zero-waste goals. Over the last two decades, the U.S. has been flatlined at a 34 percent diversion rate. So, the idea behind Beyond 34 is to provide a scalable model for improving recycling and recovery rates within cities.

“Food waste is one of the biggest challenges facing humanity; about $169 billion worth of food, enough to feed the entire homeless population in America, goes to landfills each year. Being the hospitality hub of the country, with hotels, theme parks, and entertainment, we realized we have to address the enormous amount of food waste in our city. Two of the cool things we’ve rolled out are a commercial food waste collection program, and a backyard composting program. 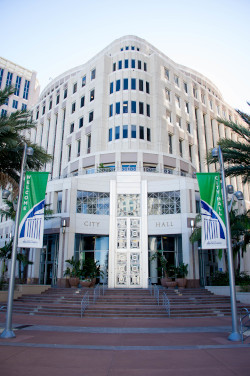 “Now, every resident in Orlando has access to a free, 80-gallon composter that we assemble and deliver to their door. The program saves money for the community by diverting food waste into the composter. We pay to dispose of waste in the landfill, so the less we tip, the more we save. Orlando now has over 6,500 households that have adopted, and are actively using, a composter to divert food scraps and organic materials, such as leaves and grass clippings.

“The commercial food waste collection program targets restaurants, hotels, and the hospitality, entertainment, and food service industries. For example, a restaurant can sign up and we provide carts on wheels for organics and food waste. We pick up the filled carts and take them to a bio-gas facility, where the waste is processed in an anaerobic digester into bio-gas, which, in turn, becomes electricity that gets pumped into the grid. The city partners with the Reedy Creek Improvement District, and Harvest Power that owns and operates the facility. It’s a sustainable way to handle food waste collection – not only making energy, but the bio-product that comes out of it is also a commercialized fertilizer. We’re excited that our Amway Center, where the Orlando Magic play, has started the food waste collection program at the arena. They are also doing it at Camping World Stadium, and the Dr. Phillips Performing Arts Center.

“There are more than five million different types of recycling labels in America alone, and people are confused about what should and shouldn’t be recycled. So, we’re working with Recycle Across America (RAA), a non-profit that’s helping to create standardized labels for food waste and recycling. Our airport and Orange County Public School system was the first airport and school district to adopt the standardized labels. We have them throughout the downtown, and now we’re putting them throughout our venues and offices.”

BVM: How do you engage with the community?

Castro: “Every year, we host a city-wide sustainability symposium that brings businesses, residents, and civic leaders together for meaningful conversations. We are also in the community on a regular basis at neighborhood centers, and we partner with our commissioners to educate the public on how homeowners can get involved with our sustainability programs. So, there is a lot of community engagement.

“First Green Bank has been an amazing partner for the city, offering special loans for solar panels and home energy-efficiency improvements. And we’ve developed a very close partnership with our municipal utility, OUC (Orlando Utilities Commission). They’ve been working with us on a number of important initiatives around renewable energy, energy-efficiency, and electric vehicles. We also appreciate the University of Central Florida, Valencia College, IDEAS For Us, Organize Florida, the Sierra Club, and the League of Women Voters, among others, as valuable community partners.” 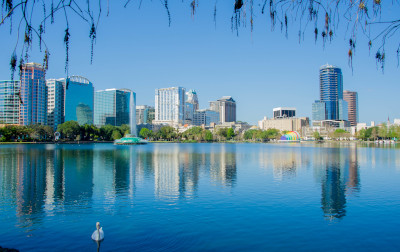 BVM: Tell us about the city’s green building practices.

Castro: “As part of our municipal plan, every new city building constructed after 2010 must achieve, or exceed, LEED Silver certification. I’m happy to say that we’ve built more than 15 certified city buildings. The new Orlando Police headquarters just got LEED Gold in addition to four fire stations, the Amway Center, OUC headquarters, Camping World Stadium, and our new public records building. More than just being green, if we build to a higher performance than the building code, we can save 30 to 40 percent of the electric and water costs over the life time of the building. As they say, that’s smart for the planet, and our pocketbooks.

“We also have a hotel in the downtown that repurposed an old office building into ALoft Orlando that’s LEED-certified; as is the NORA (North Orange Avenue) apartment complex, which has more than 120 kW of solar on the roof. Even developers are building high-performance Energy Star and LEED-certified homes.”

BVM: What is Orlando’s vision for the future?

Castro: “Our updated Green Works plan will go live in August and we’ve gathered several fantastic strategies. For example, we’re looking to fully electrify our bus rapid transit system (LYMMO) over the next five years. Our goal is to also expand the electric vehicle charging stations for the private sector; we have over 350 EV chargers now, making us one of the Top 10 EV Ready cities in the nation, and we’re looking to add 150 in the next two years.

“Another goal is to move to 100 percent renewable energy for the entire electrical grid by 2050. We have a more ambitious goal for city operations which includes 100 percent renewables by 2030. In partnership with OUC, we unlocked a new, 12 megawatt (mw) community solar farm on top of an old coal ash landfill. Ten percent of the city operations load is now powered by solar, and in the next 12 years, we’ll be significantly increasing solar on city rooftops and greenfield sites.

“There’s a lot of uncertainty around the country about the future of our cities. Mayor Dyer often says, ‘More and more of the critical issues of are time our being left to local governments to address.’ The looming issues of climate change and sustainability will need to be addressed here at the local level. We’re hoping that Green Works and the City of Orlando can be a model for others to follow; a lighthouse city, so to speak, that has measurable results around cost savings, quality of life, and attracting jobs in the green economy. The innovative solutions we’ve seen couldn’t have happened without partnerships.

“Sustainability is a cultural revolution and the City of Orlando is doing an excellent job of showing that through collaboration and partnerships we can make it a part of the fabric of our community, as we move forward in developing one of the fastest growing cities in the country.”

Check out this handpicked feature on Orlando Venues – The Amway Center and Camping World Stadium. 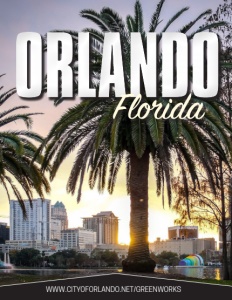