Representing those who administer federal programs

The National Community Development Association (NCDA) is a national, nonprofit organization comprised of more than 300 local governments across ten regions in the country that administer federally-supported, community and economic development, housing, and human service programs, including those of the U.S. Department of Housing and Urban Development (HUD), and the Community Development Block Grant (CDBG) and HOME Investment Partnerships (HOME) programs.

Vicki Watson is the National Community Development Association’s Executive Director, responsible for the operation of the organization, as well as its policy and legislative agenda. She explains that the NCDA’s immediate precursor was an association called the Model Cities Director Association, which was created to help implement the Model Cities Program of the late 1960s. “It was meant to help inner city areas with their slum and blight issues,” she says, “as well as provide other services – recreation, infrastructure, the razing of blighted buildings.”  In 1974, when the federal government’s Community Development Block Grant (CDBG) program was enacted into law, Model Cities was absorbed into the new entity. “CDBG basically combined several existing block grants from different agencies into one program that’s now centered in HUD,” she explains. “So, our members go back to the ‘60s.”

Those members of the NCDA are local government agencies that receive direct funding from HUD for their own city’s or town’s CDBG programs. “Some of our members also administer a couple of other HUD programs that work in tandem with CDBG,” Watson says. “For example, the Home Investment Partnerships program is an affordable housing block grant. Our members also administer HUD’s Homeless Assistance programs. The Emergency Solutions grant is a homeless block grant that funnels into city and state agencies to help with emergency shelter needs. And then, there’s something called the Continuum of Care program that provides permanent and transitional housing.”

Another program, according to Michael Look, a CDBG manager for the City of Seattle, and the NCDA’s current President, is HOPWA – the Housing Opportunities for Persons with Aids program. “It’s another block grant of flexible funding for cities and other jurisdictions to use to provide housing services for people with AIDS,” he states.

As a member-based organization, Watson defines the NCDA’s main focus as one of education. “We have two primary conferences where members can come together and learn about the latest updates in their program areas, as well as learn from their peers in terms of how they’re administering their programs. We also have a large training sector that we do on both the CDBG and HOME programs.” In fact, the NCDA is a national leader in providing CDBG and HOME training to grantees. The Association’s CDBG Basics Course is nationally known for its comprehensive coverage of the CDBG program and the Association’s cadre of HOME workshops provides demand-response training on this very intricate federal program.

Look believes that a primary mission of the National Community Development Association is to provide opportunities for those members who work with these federal programs in their own communities to have a forum where they can bounce ideas off of one another and help each other understand how they’re doing things. “We’ve got membership across the country from New England down to L.A. and from Seattle down to Miami,” he says. “And each community does things slightly differently. We can learn from each other how best to use these funds.”

In addition to its twice-yearly conferences, the National Community Development Association also publishes a monthly newsletter, keeping its members informed about developments in housing and community development. Its website, NCDAonline, provides links to other related sites and allows member to communicate more effectively with each other and the NCDA staff.

But since all CDBG programs are subject to Congress’s ever-changing budgetary priorities, the NCDA also actively advocates for its members, as well as its partner organizations, in an effort to keep the money flowing into the communities across America that need it most. Indeed, Watson says that the Coalition was originally formed several years ago when Congress was in a particularly parsimonious mood. “There was a threat to the program at that time, on the Hill,” she remembers. “The House had proposed that it be cut in half, and so we felt that we needed to have more of a national voice for the program.”

Today, Watson says that while getting the necessary funding allocations is still a challenge, lately, Congress has been somewhat less likely to propose any draconian cuts. “In terms of our programs, we’re fortunate in that they enjoy bipartisan support on the Hill,” she begins. “Unfortunately, the problem is, it’s a very tight budget that Congress works with from year to year, and has been so ever since the enactment of the Budget Control Act of 2011, which puts caps on funding every year. We’ve been very good at ensuring that CDBG is level-funded from year to year, even within these caps. We did get some relief this past fiscal year – the caps were increased a bit; but still not enough to increase our programs. I think we would fare much better if there weren’t budget caps in place,” she adds, ruefully. “For the future, it depends on who’s elected to Congress from year to year. In terms of the homeless programs – they enjoy very wide support on the Hill, so we usually do not have to advocate very much for those; they usually get an increase, every year.”

While the National Community Development Association helps to work the levers of Congress, the organization’s leadership also liaises with the Executive branch of the federal government, via its direct access to senior officials at HUD’s Washington D.C. headquarters. “It’s not just about the budget,” says Look, “it’s also about what the federal government does with the program and the various regulations they impose or change over time. So, at our conferences, we can ask them directly: ‘What does this regulation mean; how do you want us to implement it?’ And sometimes, the discussion veers towards: ‘Are you seriously asking us to do this, because it creates additional regulatory burdens on us, and we’ll need to spend more time and money?’

Both Watson and Look are intent on increasing the NCDA’s membership in order to extend its educational outreach, while increasing its political strength. “We’ve made an effort, this year, to reach out to those communities that are not members, by both email and direct mail, and through contacts with their fellow peers in their areas,” Watson says. Look reports that the Association also obtained a master list from HUD of all jurisdictions across the country that receive CDGB funding. “And we compared that with our current membership and then targeted those who weren’t on our membership list,” he says.

The NCDA has several different membership tiers: Its regular members, known as Entitlement Members, are those cities and counties which receive an annual CDBG formula grant and/or an annual HOME Program formula grant from the U.S. Department of Housing and Urban Development. The annual fees they pay are based on their population size. So-called Non-Entitlement communities – those cities and towns that don’t receive a direct allocation from HUD, but rather from their states – may also join for a reduced fee. So may Alumni Members – individuals previously employed in the community development and/or housing administrator capacity of an active NCDA member community – and any college or post- graduate students in the community development field. The NCDA is solely supported through its membership dues, and conference and training fees.

Still going strong after 40 years, the CDBG program has benefited countless American individuals, families, neighborhoods, and communities. It has funded food banks, family counseling centers, homeless shelters, parks, playgrounds, recreation centers, and accessible and affordable housing; it has helped revitalize inner-city business districts with small business loans, and improved store facades and streetscapes; it has helped seniors and low-income homeowners make necessary safety repairs to their abodes; it has helped stabilize neighborhoods hardest hit by foreclosures and delinquencies to help individuals purchase, rehabilitate, or redevelop their homes. In short, the program has made a difference in the lives of millions of people across the nation.

According to Look, the National Community Development Association serves those municipalities and the professionals they employ to implement these important CDGB programs, by providing “a unified voice to HUD and to the federal government to bring about concerns we have as program implementers.” Watson sums it up this way: “We are leaders in terms of Community Development Block Grant protection.” And then she adds: “And that’s why it’s important for those communities that aren’t members to join the Association – so that they can be part of that bigger voice.”

Check out this handpicked feature on Clarksville, Tennessee – Top Spot in the State.

WHO: The National Community Development Association 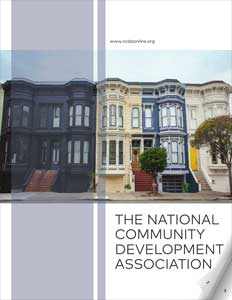