Business View Magazine interviews David White, National Sales Manager of the Schaefer Group, as part of our focus on the Industrial Furnace Sector.

The Schaefer Group, Inc. thrives as a combined force of two strong traditions – a pair of related companies that united in late 2002 and continue to innovate and excel. The FWS Division provides exceptional refractory sales and service work, and the SFI Division supplies the best aluminum furnaces and molten metal delivery systems available. No other aluminum furnace builder, today, has more experience than Schaefer Furnaces in the systems approach to high quality aluminum delivery. As a whole, The Schaefer Group provides turn-key service from design, to construction and installation, to complete technical support and maintenance.

Three healthy divisions define the scope of business: industrial furnaces; refractory sales and services; and Delta Control, a programming firm that integrates major systems with their controls. The Schaefer Group manufactures in a 95,000-square-foot facility in Beavercreek, Ohio, a suburb of Dayton, with satellite locations that do the after-market repair work in Cincinnati, Ohio, Perrysburg, Ohio, Louisville, Kentucky, and another just recently opened facility in Knoxville, Tennessee.

In the past year, The Schaefer Group has expanded their portfolio through some very interesting strategic agreements and acquisitions. National Sales Manager, David White, a 39-year veteran with the company, shares the details. “First off, we signed an agreement last year with Sanken Sangyo Furnace Co. out of Japan, allowing us to sell their tower melters, which is a different style of melting furnace than we’ve ever built before. It involves a large tower attached to a melting furnace. Basically, they put all their scrap in the tower and the exhaust gases go up through the stack and preheat everything prior to it being melted on a hearth and then draining into a holding furnace.”

The Schaefer Group had been looking at building these, themselves, when Sanken approached them and said, “We need a partner in the U.S. because we have a few furnaces here already and we want to sell more. We need someone to install and/or build them.” So, in December 2018, Schaefer signed a licensee agreement allowing them to market and sell the Sanken tower furnaces in the United States and Canada. The partnership has been great for Schaefer, opening up a whole new market of customers who want to buy those types of melters. The main advantage is they are very low in energy usage because you’re preheating everything before melting. And they take up less space than a conventional large melter.

But the Group isn’t jumping right into manufacturing the tower units. The first couple will be built in sections by Sanken in Japan and sent to Schaefer to put together onsite, do the start-up, and then the after-market sales. White clarifies, “Once we get a couple under our belt, they’re going to send us drawings and we’ll build them ourselves. In August 2017, we moved from a 33,000-sq.-ft. facility to a 96,000-sq.-ft. facility in Beavercreek, so we actually have the space to build these in. We’re in a suburb of Dayton, and we give Dayton as our address because no one has heard of Beavercreek – that is until this past Memorial Day, when we had a tornado touch down about two miles from our facility. Unfortunately, it wiped out a few of our local suppliers. We had 15 tornados touch down within a 60-mile radius of our building. That’s very unusual for Ohio.”

Another savvy move from The Schaefer Group was the recent purchase of assets and equipment from Avchem Corporation. As White explains, “Avchem was machining ceramic board parts for the low pressure die-cast industry, the extruders, the billet manufacturers, and the forging industry. We had already been buying some of these components from them to sell to our customers, and when they decided to get out of that business, we made a decision to purchase it from them. And that’s going to be huge in the near future. We were doing a substantial amount of business with them, already, and adding to that is the business they were doing with other customers, so it made a win-win situation for us to take it over. We’re in the process, now, of moving all the CNC machining equipment for these ceramic boards up here. Every billet manufacturer, every extruder, every low-pressure die-cast machine uses these pieces that we manufacture now. There are very few in the U.S. doing that, in fact, the one company that is our competitor buys them from overseas. So, we feel we have a high advantage in the industry at this point.”

Next on tap for The Schaefer Group is selling their own line of fluxes. “We’ve signed an agreement with Amcor to have them take their existing fluxes and put our part number on them,” says White. “So, we can sell them with every new furnace we make. The fluxes are what clean the aluminum and lower the amount of waste by-products from the aluminum melting process. We do a lot of training sessions on how to clean a furnace, so it just made sense that we recommend a flux to people. Those are three things we’ve done in the last year that have, and will continue to increase value, market share, and revenues for our company.”

The Group’s biggest customers are in the automotive sector. In fact, almost every major player in the industry has aluminum parts poured out of a Schaefer furnace in a tier-one supplier’s facility. The electric motor industry is another prime customer. “Every house has about 22 electric motors in it,” says White, “and we dominate that market. Just about every company that produces electric motors has Schaefer furnaces. Many long-term customers have been instrumental in our growth, especially General Motors and Honda; Saint Jean Industries in Heber Springs, Arkansas; Emerson Motors; and Pace Industries. Our steel costs have risen quite a bit in the last year because of the tariffs on imported steel. The steel guys all raised their prices, regardless of where the steel came from, which is not good. We ended up having to raise our prices because of it.” 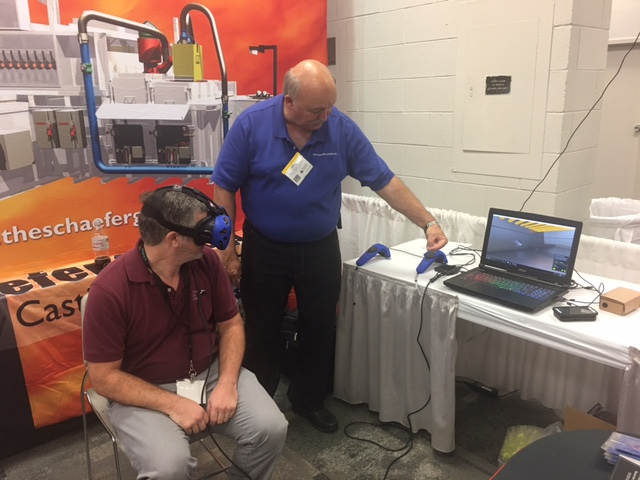 As it approaches its 90th anniversary in 2020, The Schaefer Group is still a family business – Dick Schaefer is owner of the company and Chairman of the Board. David Nelson is President, David Robinson is Vice President, and each district office has its own manager. The company currently has 117 employees, up from 90 last year, but finding skilled labor is a challenge. Being a union facility, they’ve had to go 150 to 200 miles out to find union people who are not already working, to come and work for them. Schaefer has recently hired a couple of electrical technicians that were out of trade schools and working elsewhere.

Looking ahead, White forecasts, “For the next three years, from a management standpoint, we’ll be focusing on the three new items I highlighted, because they are major in terms of resources required and we want to make sure they’re managed properly and profitable before we jump ahead into something else. Certainly, we’re going to enhance our virtual reality initiatives. We draw furnaces in 3D, and have the ability to change them into VR, so a customer can actually come in here, put the headset on, and walk through his cell with our furnace in it, to make sure everything clears. We recently signed an agreement with our marketing company to develop a training VR on how to clean furnaces and troubleshoot. We’ll do it in segments, starting with cleaning, then move on to combustion and operation. So, instead of having manuals, we can actually send a VR training component to the customer and they can walk their employees through that with virtual reality. Marketing Options out of Dayton is doing that for us; they are phenomenal. The owner, Barb Castellano, markets for a lot of different suppliers in the foundry industry, and really understands our business. She increased our revenue stream considerably, did our rebranding, does all our VR work, our advertising, newsletters, and we’ve seen some great results because of it.”

The longevity of the company speaks to the fact that it’s well managed. The Schaefer Group has built some of the largest systems in the world for die casters and foundries and that experience carries on down to the small mom-and-pop foundry that just wants a little crucible furnace. White emphasizes, “It’s our people who truly make the company. We have quite a few long-time employees. People don’t stay around long unless they’re happy and appreciated – not just from a revenue standpoint – but for the work they do. That speaks volumes about The Schaefer Group. We have people retiring after 30 or 40 years with us. When you look for a company that you have to rely on for production, you want one that’s stable, that’s been around awhile, that has the experience – and that’s what makes us successful. Our customers trust us.

WHO: The Schaefer Group

WHAT: A furnace manufacturer and service provider