Changing with the times

Founded in 1967, Chatlee Boat & Marine is a proud, family-owned business, operated by the Yow family out of Sanford, North Carolina since day one. To this day, brothers Robbie and Jeff Yow are on site six days a week.

The Chatlee Boat and Marine property is a generous size, boasting five different showrooms, as well as a private test lake facility for customers to try out their purchases. Having the water readily available allows the staff to demo the boats and show customers how to load, unload, and operate the craft. They also have six full-time service technicians for complete, knowledge treatment when it comes to boat services. Chris Martin, General Manager at Chatlee Boat & Marine elaborates, “We can offer our clients full services. We have are proud to offer sales, finance, full service department, rigging department, fiberglass repair shop, parts department and Pro Shop .”

The company is a long-time, highly regarded institution in the community and collaborates closely with multiple partners, including the North Carolina Farm Bureau. Their valuable long-time relationship with Chatlee is a strong one that, according to Martin, “Provides consistently fantastic financial services.” Chatlee Boat & Marine has a reciprocating loyalty with all their partners, including manufacturers. Martin adds, “To be honest, these strong ties have come in handy.”

The last few years have presented outdoor industries of all types with unique problems. But in the aftermath of COVID, there’s been an explosion in recreational spending in the U.S., with demand for RVs and boats increasing steadily. “This demand and change has turned the industry on its head,” says Martin. “During March and April, pre-COVID, we’d have between 200 and 300 stock boats on the lot, but since COVID, we’d be lucky to have between 25 – 35 boats.” This has been a real challenge for a company that has always operated with high volume sales. To alleviate the shortage of new inventory, Chatlee Boat & Marine buys as many pre-owned boats as they can. The company’s sales team actively seeks out stock and buys models as old as 12 years that are in good condition.  Before putting the boats on the lot for sale they are all water tested and checked out through Chatlee’s Service Department.

The five attractive showrooms on the premises are divided into different categories of boats. These include salt water craft, deck boats, pontoons, jet skis, and pre-owned. The division of model types helps sales personnel locate stock easily and efficiently and gives the consumer a great opportunity to compare. 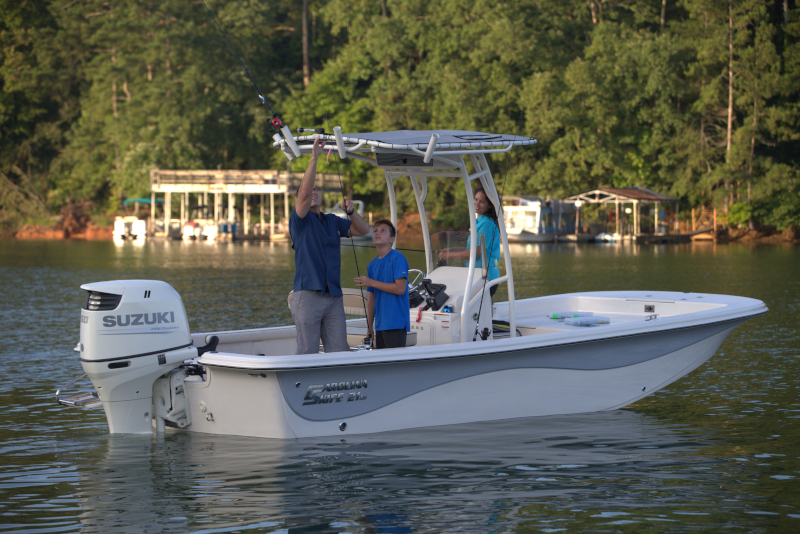 While the world might be migrating to selling online, the boating industry is still predominantly operating in-person on showroom floors. Martin suggests, “One main reason for the apprehension of switching to an online platform is that many boat manufacturers don’t want to list their new boat prices for everyone to see.” That being said, Chatlee Boat & Marine does operate a website to showcase their available inventory. Currently, the company stocks a variety of top brands including Avid (a new aluminum line), Bulls Bay, Carolina Skiff, Hurricane, Sea Hunt, South Bay, Stingray, Suzuki Marine, Sweetwater, Yamaha Watercraft, and Yamaha Marine – in addition to a wide variety of pre-owned makes and models. A point of pride: Chatlee Boat & Marine is one of the largest dealers in the country for Sea Hunt, Carolina Skiff, Stingray Boats and Suzuki Outboards.

As you’d imagine with such a great reputation and the popularity of the internet, Chatlee attract clients from across the U.S. and beyond. “Chatlee Boats & Marine sells up and down the East Coast, and has sold boats all the way from Maine to Texas,” says Martin. “We’ve also sold boats in Canada, and a few in California. Although, Chatlee sells boats up and down the East Coast most of our stock lands North Carolina.”

While the supply chain issue has affected many elements of operations at the company, the service department has been fortunate to keep parts rolling in to complete yearly maintenance services on time. This could, in part, be due to the fact that most of the technicians have been with the company for years. Martin reports, “What differentiates us from other companies is we don’t have a lot of staff turnover. Some of the guys have been at the company for 30 years. Currently, we have six full-time sales staff and the newest employee has been with us since 2009.”

The importance of retaining staff is crucial, since finding new employees is difficult, especially when it comes to those roles with high-level skills like the technician crew. When Chatlee Boats hires individuals, they upskill them if required. This training can be done inhouse or via manufacturers’ training schools. 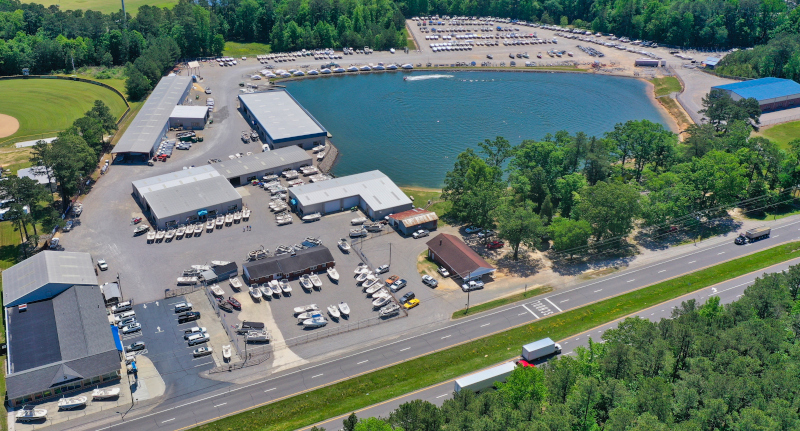 Not surprisingly, given the low turnover of staff, the company culture is very much family-centric, with the owners on site every day and helping out where they can. Those family members are always working as hard as the day they started, which inspires the staff to achieve their best potential. The owners also believe in a literal open door policy with none of the offices fitted with a door, making them accessible 24/7.

Although, many things stay the same, a lot has also changed during the pandemic. Big boat shows were a massive part of the recreational marine industry, but since COVID most in the boating community are staying away. While the Chatlee Boats Team has been to two shows in 2022, most of the shows have already been canceled for the rest of the year. According to Martin this is due to a lack of stock to showcase. He notes, “Nobody has inventory, but we’d love to see the big shows return.” An estimated return date for these shows could be between 12 to 16 months, but no one is sure.

Many of today’s avid boating clientele will research a boat online before viewing it in person. But there are still individuals who go directly to the store and browse uninformed. Waiting periods for boat orders can range, but on average it will take two and half months for delivery to the dealer. In terms of converting boats to becoming more environmentally friendly, according to Martin, the boat industry is far behind the car industry, with most marine brands sticking with petroleum products.

As a business that’s been operating for decades, Chatlee Boat & Marine has multiple generational customers in the same family. Even some repeat customers who purchased their first boats from the company and have since upgraded their vessels through the years. In some cases, parents will bring their children to purchase their first boat. Before COVID, the company was concerned that the newer generation weren’t interested in boating, but it’s clear that  younger buyers are just as keen as the seasoned boaters.

Being a well-established company, Chatlee Boats plays a vital role in the community. The owners are Christians who work with local churches, high schools, and radio stations for the benefit of all in need. The company sponsors radio shows, uniforms, funds food drives, and more. Chatlee employees also assist with these fundraisers as well.

Moving into the future, Chatlee Boat & Marine is excited that COVID has had a surprisingly positive impact – opening the boating community to an entirely new market. With this new market comes unexplored opportunities for the company to investigate, in regard to growth and new product offerings. Sunny days ahead!

What: Family-owned premier boat dealer, since 1967

Where: Based in Sanford, North Carolina

Reno Buick GMC Cadillac – “We Have...