Rural living at its best

Sometimes, when you least expect it, you find an unassuming, tucked-away place that steals your heart. Welcome to Boone County, a central Iowa gem that epitomizes rural living at its best. Historically, its roots follow a railroad lineage dating back to the 1860s. Madrid, the oldest of the three original communities was founded as Swede Point in 1846. By 1865, Montana, later renamed Boone, had been spurred to life by the railroad and eventually became the county seat. In 1866, the Town of Ogden was also laid out along this busy rail line. Today, Boone County is comprised of Boone, Madrid, Ogden, Pilot Mound, Boxholm, Beaver, Luther, Fraser, and Berkley.

While it still enjoys the benefits of a strong railroad presence, Boone County offers so much more. Be as active or relaxed as you please while exploring the scenic Des Moines River Valley. Enjoy the security of excellent jobs, fine education, healthcare, recreation, and a myriad of home-based opportunities for makers and artists of all disciplines. Boone is the birthplace of First Lady, Mamie Eisenhower, home to the Iowa Municipal Band Festival, Super Nationals, and the biannual site for the Farm Progress Shows, the nation’s greatest agricultural showcase.

Kurt Phillips is Executive Director of the Boone County Economic Growth Corporation and also oversees operations of the Boone County Chamber of Commerce – two separate, private, non-profit organizations representing business and industry in different ways. He explains, “From the economic development office side, we are a county-wide organization serving the interests of County government and also the cities of Boone, Madrid, and Ogden, which together make up 80 percent or more of the county population of 26,000. About 12,500 people live in or near the City of Boone (the county seat) and because it has previously developed land for retail, commercial, and light and heavy industry, that’s where my most of my work is focused. We are seeing an uptick in capital investment – a lot of it is retail.”

The community of Boone sits on U.S. Highway 30. That four-way trunk highway is a bonus for transportation, access, and visibility. As a result, the city is expanding on the south side, and planning for smart growth in that direction is a priority. There is also a lesser degree of growth to the east, in the vicinity of the municipal airport.

The county’s biggest project to date is causing quite the excitement. According to Phillips, “We just received ‘shovel-ready’ certification for a 150-acre site, this week, after a year-and-a-half of work. We’ve done all the environmental, cultural, historical, archaeological research, and the title, ownership history, wetlands, and endangered species research. We’ve concluded what the level of utilities and services are at or near the site. We’ve vetted what our rail service will look like – it’s a big project that just came to fruition. The State of Iowa works with Quest Site Solutions out of South Carolina and through them we’ve attained certification, which means we have a 150-acre site that’s rip-roaring ready to go for larger industry. It’s probably been 35 or 40 years since we’ve had a great piece of land in position to recruit industry on a national or even international level.” The State strongly promotes those certified sites; there are about 24 in Iowa now. They are very attractive to site selectors, as well as CEOs and business development teams who go out and search for the next location for major industry. It promises to be a gamechanger for the county.

Boone County has an agriculture-based economy and is proud to be the home of Fairway Grocery Stores – one of the largest privately-held grocery chains in the country with about 120  stores across five states. The company started in Boone and currently employs about 600 people, locally. Boone County is also a hub node for the Union Pacific Railroad, which has several hundred area employees on the payroll. Otherwise, the City of Boone and Boone County don’t have many large employers. Three to four thousand commuters who live in Boone County travel 15 minutes to Ames, where Iowa State University and the headquarters for the Iowa Department of Transportation are located. And some travel 30 to 40 minutes south to Des Moines. Phillips reports, “We see a lot of out-commuting here, as well as people coming in for the jobs in Boone County. We’re in a unique situation, but I feel we’re on the uptick for growth and development of the county, as a whole.”

The Boone Chamber of Commerce, which also houses the Tourism Bureau, deals more with small business owners – assisting them, advocating for them, providing services and benefits to help them along, whereas, the Boone Economic Development organization is more concerned with job development, jobs creation, and tax base initiatives – looking at the big picture and overall development of the whole county and its communities. It thinks larger, but certainly helps small businesses, as well. Being a dual-role executive over both organizations, even though they are separate entities with separate boards, Phillips has the ability to change hats and, along with his staff, help people in a variety of ways.

He notes, “We have a lot of work to do in workforce development. And each of the communities of size in our county is working on housing initiatives. We’re close to the Des Moines market and, because of today’s societal acceptance of driving a little way to your job, there are over 400,000 people in our labor shed to pull from. But unemployment being as low as it is in Iowa, hovering around two percent, most people are already employed. So, we’re challenged with workforce development and if we’re going to recruit people to come here, we have to make sure we have adequate housing. In that regard, we’re very supportive of each community’s local government in their efforts to facilitate new housing or rehabilitation.” 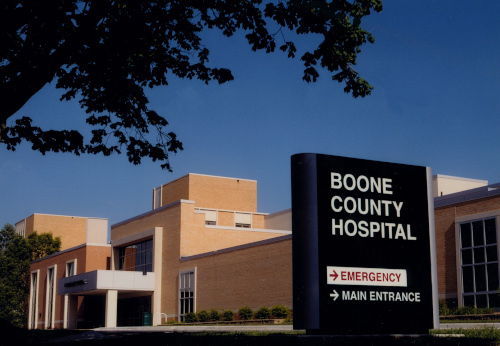 To help with the workforce issue, Boone High School offers a work-based learning program that is career and technical education oriented. Both the Chamber and Economic Development organizations are involved with that. Describing the details, Phillips relates, “It is based on the premise that there are only two ways to grow your work force. You either birth them, raise them, educate them, and keep them – or you bring them in from somewhere else. You can also retrain people to upscale from, for example, a clerking job, to something more skills-oriented. All those things are in play. We’re also closely working with the High School on a program they call ‘EDGE.’ The idea is to get students involved in understanding what jobs are available for them in business and industry, have that experience before they graduate and, then, as they leave high school, they’re better prepared to enter an apprenticeship program,  if that’s what they desire. Or they have a better sense of what they can do with a two-year degree or understand where their commitment should lie if they’re going to seek a four-year or greater education.”

He adds, “Considering the student loan crisis, it’s important that students leaving high school have an idea of the opportunities that exist for them – certainly we want to show them those opportunities that are in our backyard, so they know they can stay here and have a great job and make a great living. We also want to make sure they are prepared to make good decisions at the start of their career.”

Simply stated, Boone County is not an industrial or manufacturing powerhouse. Its attributes have been more conducive to living a rewarding, prosperous life of a different nature. That being said, the county is definitely open to opportunities for the future. Phillips shares, “I think that as rural America changed over the last 30 to 40 years, from the mentality that you always lived and worked right in that one community, as people have become more comfortable with commutes or even telecommuting to work, that’s helping Boone County become a reasonable consideration for business and industry. With our proximity to metro areas like Des Moines, and even the smaller statistical area of Ames-Story County, we have renewed life here. That’s really the story of Boone County. We’re in a great position to see the most significant growth in business, industry, and quite possibly population that we’ve seen in many decades.”

Where: Central Iowa, near Des Moines 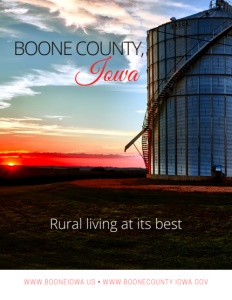