Montana’s trailhead to the Big Sky

The Billings Logan International Airport (BIL) is a commercial, cargo, and general aviation airport, built on a sandstone bluff, about 500 feet above, and two miles northwest of, downtown Billings, Montana. According to local legend, the first airplane flight took place in Billings on Memorial Day weekend in 1913, when a local dentist, Dr. Frank Bell, flew his Curtiss 0-X-5 from Billings to Park City and back, a distance of 40 miles.

“Back in the 1920s, when flying was first becoming popular, there were little landing strips all over the valley and people were trying to come up with the best place to locate an airport,” explains Kevin Ploehn, Director of Aviation & Transit. “In 1927, the city purchased some land, the first 400 acres, for about $5,200.” Using horse drawn equipment, 1,820 feet of unpaved runway and a small administrative building were constructed on top of the Rimrocks overlooking the Yellowstone Valley and the Billings area.

“Subsequently, land was donated to the Airport by a guy named Dick Logan, who ended up being the Billings Logan International Airport Manager from 1927 through 1957,” Ploehn adds. “Shortly after his death in 1958, the Billings City Council renamed the airport, the Logan Airport, and in 1971, the name was updated to the Billings Logan International Airport. The first commercial service started showing up in the early 1930s; primarily Northwest Airlines and Inland Airlines – mostly for mail, but shortly, thereafter, passenger service started. As time progressed and aircraft sizes increased, the Airport grew from 400 acres into 2,400 acres. So now, we have a 10,500-ft. runway, one small parallel runway for general aviation use, and a crosswind runway.”

The Billings Logan International Airport is owned by the City of Billings, and is the only municipally-owned, commercial-service airport in Montana. Billings Logan International Airport employs approximately 50 people and is completely self-sufficient; no City General Fund support has been received since 1975. Its commercial airlines include Alaska, with flights to Portland (OR) and Seattle/Tacoma; Allegiant, with flights to Las Vegas, Phoenix/Mesa, and seasonal Los Angeles; American Eagle, with flights to Dallas/Ft. Worth; Delta, with flights to Minneapolis/St. Paul and Salt Lake City; United, with flights to Denver and seasonal Chicago; and Cape Air, an Essential Air Service commuter airline, which operates nonstop flights with a Cessna 402 prop aircraft to Glasgow, Glendive, Havre, Sidney, and Wolf Point, all in Montana.

Billings Logan International Airport’s cargo airlines include FedEx Express, and UPS Airlines. “Our Airport is really a regional hub for eastern Montana and northern Wyoming,” says Ploehn. “So, a lot of stuff is shipped through this Airport for the region. When the North Dakota oil fields were going full bore, just about everything that needed to go there, came in air freight through Billings. Nobody in the state is close to our freight numbers; we’re bringing in about 35,000 tons of freight a year. That was last year’s numbers and this year’s numbers are up by 20 percent, so we’re serving a fairly large area.”

In addition, about 150 general aviation aircraft call Billings Logan, home. And, like many regional, GA airports, Ploehn says there is a waiting list for hangar space. “We definitely have a hangar shortage,” he admits. “We have the land available for hangar development – it’s just that the City, itself, is not in the hangar development business. If someone wanted to come in and build a row of T-hangars, I’m sure they could fill them up. The Airport has developed the hangar sites; we’d do the ground infrastructure and then we’d lease parcels to those folks and they can build their own hangar.”

The Airport is also home to several “top notch” aeronautical businesses, Ploehn states. “We have an avionics company called Aerotronics. People from all over the world get their avionics done here. We have a really good FBO, Edwards Jet Center. They’ve got a couple of large hangars that will accommodate up to a Gulfstream V. We have an aircraft upholstery business, Aero Interiors, here, as well. We’ve got a lot of things that accommodate the general aviation community.” In fact, businesses at the Airport provide approximately 700 jobs and, overall, the Airport contributes over $409 million, annually, to the area’s economy.

Regarding any local competition, Ploehn reveals that the Airport has been in a “little tourism battle” with the airport at Bozeman, some two and a half hours away. “We’re trying to capture some of those tourists who come to Montana to see Yellowstone National Park, and your choices are Billings and Bozeman,” he explains. “Bozeman got into the game early and renamed their airport the Bozeman Yellowstone International Airport. They’re located very well for bringing people into Yellowstone Park, but, if you come into Billings, you can get to the Beartooth Highway which takes you to Cooke City, which is the north entrance to the Park. It’s a beautiful drive and we’ve been marketing the heck out of that. You can only drive it during the summer and fall, but when you’re doing it, you’re on the top of the world. There are some great turnouts; you can look around and there are spectacular views. So, we’re trying to catch up a little bit, and I think we’re making a little headway. That’s really the only place where we compete with the other Montana airports.”

“Montana’s been discovered,” Ploehn adds. “We’re seeing a lot more passengers come to Billings, and so is Bozeman, Missoula, Kalispell, Helena; and we’re all in the process of expanding our terminals to some degree. Right now, we only have five loading bridges and, during the busy times of the year, we always have seven or eight aircraft on the ground, so we have to do a lot of shuffling of people and aircraft, which isn’t in the airlines’ best interests. They like to park their aircraft and bring people in and out easily. So, we’re looking at expanding our concourse, so we can get up to eight loading bridges put in place. We’ll start that project next summer.

“We’re also in the process of purchasing a small piece of ground to help provide some more protection for our small GA runway; we recently shifted it a thousand feet to the west so we could open up some airfield for expansion and we’re working with the owner for that purchase. We don’t see anything long-term that’s going to require us to purchase any more land for a while. Our Master Plan came out in 2010 and we have just about nicked everything off. Once we get the terminal project done, that will be almost everything on that Master Plan that we really wanted to accomplish, so we’ll be starting another plan in the next few years. We have one study that we want to do on our crosswind runway to see if it’s expandable for larger aircraft, and the FAA would like us to look at a couple of things with regard to the way the crosswind intersects our other two runways, for safety reasons.”

Going forward, Ploehn notes that the Airport will continue to work with the local Chamber of Commerce and the Big Sky Economic Development group to try and bolster airport and local business and area tourism. “A lot of times, airports are their own little island,” he remarks. “But in this community, we’re working hand-in-hand on a lot of things to try and enhance both the local economy and the business at the Airport, as well.”

Check out this handpicked feature on Salem Municipal Airport – Getting from A to B.

WHO: The Billings Logan International Airport

WHAT: A commercial, cargo, and general aviation airport

Aerotronics, Inc. is a full-service avionics installation and repair station. From fixed or rotor wing, Aerotronics has the technical expertise to address all of your General Aviation aircraft needs. In addition, our Experimental Division can help you with designing and building a Plug-n-Play panel for your kit plane. 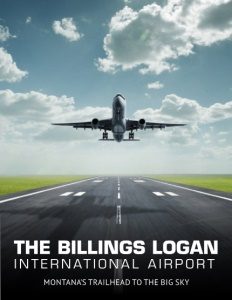