Ashland County, Ohio – Getting down to business

Welcome to Ashland County, Ohio, where everything a business needs to thrive is within easy reach – accessibility; great sites and buildings; and strong community support – all the tools vital to success. Ashland County was formed in 1846 from portions of Huron, Lorain, Richland, and Wayne Counties and is named for “Ashland,” the home of Kentucky Senator, Henry Clay. The City of Ashland is the county seat.

Grow Ashland is the comprehensive economic development arm for Ashland County and the City of Ashland. Operating under a public-private partnership structure, Grow Ashland strives to strengthen the local economy in the primary areas of business retention, expansion, attraction, and entrepreneurship – in addition to working with the region’s economic base and networking with prospective investors.

According to Kathy Goon, Executive Director of Grow Ashland, “Ashland County is situated halfway between the major cities of Columbus and Cleveland, with I-71 going through it. We’re exit 186 and it’s a great location for manufacturing, for retail, for distribution, and for trucking companies. Our largest manufacturer, Mansfield Plumbing Products, is located in the small village of Perrysville in what we call ‘South County.’ Perrysville is home to 721 people and Mansfield Plumbing employs 700 employees. Mansfield Plumbing also has a logistics warehouse in the City of Ashland, because of the ease of access to I-71. The company manufacturers more than a million toilets a year and has been a valuable asset in our community for over five decades.”

In addition to Mansfield Plumbing, Ashland County boasts many other economic gems including The Step2 Company LLC, which is the largest American manufacturer of preschool and toddler toys. Another company of note in a rural area is American Augers, a directional drilling company located in Jackson Township. Having several large corporations as well as many smaller manufacturers in less densely populated areas is a source of pride for the County proving you don’t have to operate in the City of Ashland to be successful. 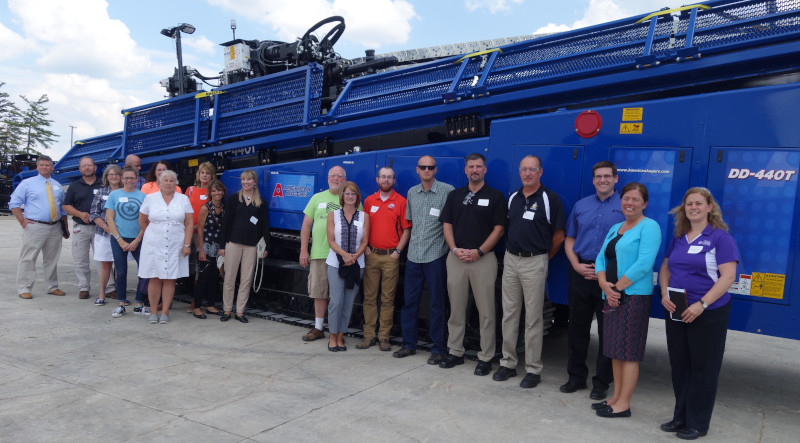 “Ashland, Ohio was built on coloring books, printing facilities, and pump manufacturers,” Goon reports. “A lot of pump companies, including original firms that are now known as Pentair, Keen Pump, Eco-Flo, and Champion Pump are here. Many of these companies were founded in the late 1800s and early 1900s, and Ashland has been able to sustain those types of industries in the long-term.”

Grow Ashland and the County assist with expansions of existing manufacturers, as well as helping prospective employers. If a new company is interested in relocating to the area, the City of Ashland can sell available parcels at an attractive cost in the business park if a significant number of well-paying, new jobs are created. To help meet employment goals, Grow Ashland collaborates with the North Central Workforce Alliance, Transformation Network, and the Ashland County-West Holmes Career Center to offer leadership training, new employee training, youth education, workforce retention, and more.

In 2017, Grow Ashland spearheaded a Community Entertainment District in the area known as the ”250 Corridor” that extends east from downtown to I-71, and also established a Downtown Revitalization District because Ashland had no available liquor licences left from its quota. At the time, a new license to serve alcohol would cost between $50,000 to $100,000. “That’s unheard of,” says Goon. “We don’t want to put anybody in a position to fail, especially franchises or mom and pop operations that want to open restaurants and serve alcohol. So, we were able to secure 15 additional liquor licenses per district. That gives us 30 in total. The key is that 75 percent of sales have to be food and 25 percent liquor. So, you’re not bringing in a bunch of bars, and that has helped us attract new restaurants. With that, and the downtown revitalization, things are looking up and people are buying buildings.”

Ashland offers incentives in what is known as a Community Reinvestment Area (CRA), where an owner is eligible for 50 percent off taxes on an improved property for 10 years. There is also an Enterprise Zone for manufacturing and distribution businesses. It doesn’t abate property taxes already being paid, but it can be applied to additional improvements that have been done.

Grow Ashland also helped Ashland County set up land bank, which focuses on repurposing delinquent, abandoned properties. What does this have to do with economic development? Goon explains, “Companies relocating here are bringing executives who will want to live in a nice community. You want to make sure your residential area looks good and your corridors coming into your city look good. Ashland Land Bank will help clean up the blight in neighborhoods and bring them back to where people are invested in their homes.” 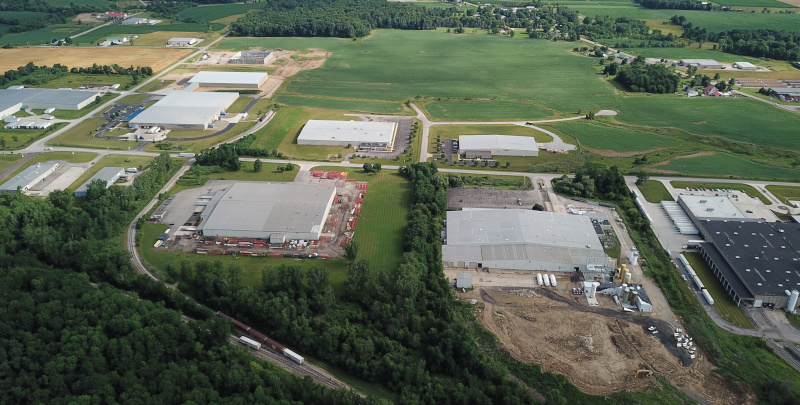 Ashland also has many entrepreneurial businesses moving to the area. Grow Ashland works with everybody – from a very small business right up to a company with 1,000 employees. Goon explains, “Companies come in wanting a 100,000-sq.-ft. building with 40-ft. ceilings, right on I-71, with internet access, and utilities running to it. And I tell them they’re looking for the ‘purple squirrel’ – in other words, something that doesn’t exist. Instead, we find what’s available that’s going to work the best and figure out how we can tweak it. We go by their bottom line and build from there.”

In 2017, two major natural gas pipelines were constructed right through the County from east to west. The smaller (12 to 24 inch) line, north of the City of Ashland, carries gas used in the manufacturing of plastics. A 42-inch pipeline through the southern County, transports gas for heating homes and businesses. The construction project spurred millions of dollars of economic activity.  With the influx of new workers, money was spent on hotels, services, goods, restaurants, and much more.

Marketing is another facet of Grow Ashland that has been very effective. Goon hired Scott Williams, owner of Vinyl Marketing, to produce a promotional video that clearly defines economic development and the role of GAED. As Goon notes, “Scott is extremely talented and has surrounded himself with an amazing team. We saw a video they did for the Uniontown Brewing Company, a new local business that started here in 2017, and it was every bit as good as a Budweiser commercial. That’s why we signed them on to promote Ashland.” Williams is taking it one step further by investing in the downtown. He bought a building in the core and is working with Grow Ashland on a tax incentive to help with renovation costs.

In other exciting news, a film company is relocating from Los Angeles to Ashland. Scott Donnelly, owner of Ashland’s Donnelly Ford, purchased and restored a historical downtown building for his movie company, Good Deed Entertainment. Donnelley is excited because, not only is his heritage building a wonderful location for his new office, it is also a perfect setting for film shoots.

Another new addition to the community will be Central Ohio Medical Textiles (COMTEX), a commercial hospital laundry company. COMTEX is constructing a $20-million facility which will bring 75 jobs in the first three years and 100 by year five. For the future, Goon says, “I see everything in the City of Ashland being built up. We’re annexing more property from the townships and I see us growing north of the Ashland Business Park. Our development to the east, past I-71 and onto 250, is a tourism destination area. This high traffic location is home to a number of locally-owned businesses, including the original Fin, Feather, and Fur Outfitters, a sporting goods retailer with five additional locations in northeast Ohio. Another successful business is Grandpa’s Cheesebarn, which just celebrated 50 years in business in Ashland with additional locations in Norton and Summit Mall. There are also several new franchises that opened recently in this area, including Hampton Inn & Suites, Buffalo Wild Wings, Dunkin Donuts, Chipotle, and Tim Hortons. We look forward to this being an Entertainment District complex with even more retail and restaurants – a definite destination to draw people to Ashland, where they can enjoy themselves, dine, and shop.”

Goon added, “I’m honored to be Executive Director for Grow Ashland. Helping local businesses and working to expand economic opportunity is something I’m very passionate about. I love meeting with our local community and business leaders and developing a plan for progress in Ashland County. We want our existing businesses and new prospective companies to know that we will always go above and beyond for their projects.”

Check out this handpicked feature on Akron, Ohio – Cleaning up and moving on.

What: A northern Ohio county: Population 53,628

Where: Between Cleveland and Columbus, Ohio 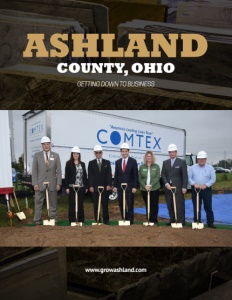