Business View Magazine profiles Natick, Massachusetts , a town of about 38,000 and fifteen miles west of Boston

Fifteen miles west of Boston, Natick, Massachusetts is a town of about 38,000 that was first settled in back in 1651 and incorporated in 1781. Many of its early residents – both its English settlers and Native Americans, alike – participated in the Battles of Lexington and Bunker Hill, and served in the Continental Army during the Revolutionary War. Primarily a farming town, in the 1800s, Natick became known as a center of shoe manufacturing; by century’s end it had twenty-three operating factories, and was third in the nation in the quantity of shoes produced. Natick also had the first plant in the world for the manufacture of baseballs. And for over a hundred years, on every Patriots Day, it has served as miles eight through twelve of the Boston Marathon.

Today, not only is modern Natick one of the fastest-growing towns in the greater Boston area, it may also be one of the most environmentally progressive. Natick’s Director of Public Works is Jeremy Marsette. His department is responsible for the administration of the town’s municipal waste-water and drinking water, sanitation collection, municipal energy, vehicle and equipment maintenance, roadways and sidewalks, stormwater drainage, engineering, geographic information system, common areas, parks, and public trees.

Recycling programs are also managed by the Department of Public Works – and there are many of them.  “Unlike many communities in the Commonwealth, our municipality collects solid waste and single-stream recycling at the curbside for all residents,” Marsette says, “and that has drastically reduced the amount of solid waste generated in the town. The combination of a ‘Pay as You Throw’ system for curbside solid waste collection and the single-stream recycling has really helped increase our recycling rate over the years, which is about at 30 percent. And that’s something that we want to continue to improve upon.”

The town also has initiated a two-year a pilot program for the curbside collection of organic food waste. “We received grant funding through the Commonwealth to initiate the pilot program, and we have about 500 households throughout the town that are participating,” he says. These households separate their food waste, including meat, dairy, bread, fruit, and vegetables from trash and recycling, and dispose of it in a special curbside bin that is collected by the town on a weekly basis. So far, the town has been collecting approximately 1.5 tons of food waste each week, with a “set-out” rate of about 85 percent.

In addition, the town conducts curbside collection of residential yard waste twice a year, and re-uses much of the mulch it makes from these collections. Natick also has regular collections of household hazardous waste, and at its recycling center, it processes many “hard to recycle” materials, such as books, paint, used motor oil, batteries, light bulbs and tires. The town is also part of a mattress recycling program, having received a two-year grant from the Commonwealth’s Department of Environmental Protection. Any mattresses it collects from residents are recycled at no cost to the town. Finally, the town is also looking at expanding a textile recycling program it already has at its public schools into a town-wide program for the curbside collection of textiles.  The collected textiles would be processed for reuse or the materials recycled.

Keeping the public informed of all these various recycling programs and their schedules is essential to maintaining participation, so Marsette says that the town communicates with its residents via a smart phone app and a web portal. “Residents can sign up for an account and receive reminders of when their collection dates are scheduled,” he explains. “We post news about unique collection events and alert customers of when we have to change a collection day due to holidays or winter weather.”

Art Goodhind is Natick’s Land and Natural Resources Division Supervisor and Tree Warden. He talks about two big projects in his division that further demonstrate the town’s commitment to best environmental practices. “We partnered with Smart Water Management, and upgraded to a centralized irrigation system that operates off of evapotranspiration data,” he begins. (Evapotranspiration is the process by which water vapor is transferred from the land to the atmosphere by evaporation from the soil, and by transpiration from plants.) “That helped us more efficiently identify when we have leaks, so we’re able to make repairs quicker, reduce overwatering, and know what the plant actually needs and supply that amount of water. The centralized system can be accessed from an IPhone or an IPad or any other device. It constantly sends information like flow rates, wiring issues, pump issues; it can self-diagnose – if you’re mowing over an irrigation head and break it, that computer is smart enough to notify you via email or an alarm on the system, which is reviewed daily. Or it can shut itself off immediately so you’re not bubbling water for no reason. It’s been pretty innovative for us.”

Goodhind’s second big project involves a grant from the Toxic Use Reduction Institute at UMass Lowell, in partnership with Osborne Organics and Beyond Pesticides, for a pilot project in organic land care for Natick residents and lawn care businesses. “It’s basically land, or turf, care without the use of pesticides,” he says. “That’s a sustainable approach in terms of using organic products that are much less toxic to the environment. We’re in year one of a three-year project and the results have been very good, so far.”

Jillian Wilson Martin, Natick’s Sustainability Coordinator, is a frequent partner on the initiatives pursued by Marsette and his team at the Department of Public Works; however, her main focus is on improving energy efficiency, increasing the adoption of renewable energy, and saving taxpayer dollars.

In the spring of 2010, Natick became one of Massachusetts’ first “Green Communities”, a designation the Massachusetts Department of Energy Resources gives to cities and towns that establish an energy usage baseline and develop a plan to reduce it.

“Our focus on energy pays dividends,” says Wilson Martin. “Since becoming a Green Community, we have reduced the energy we use to operate Natick’s public buildings, streetlights, vehicle fleet, and water and sewer systems by 25 percent and cut energy costs by more than $500,000 each year.”

Some of the town’s energy upgrades include: the replacement of streetlights to LED technology; the addition of variable frequency drives to its sewer department’s pump stations; the replacement of high frequency boilers in town buildings; and the installation of occupancy sensors in buildings to make sure energy is conserved when buildings are closed or few people are present. “This year, we’re working to retro-commission Natick’s Town Hall and Community Senior Center to make sure they are operating in accordance with current energy code and that conditions are comfortable for building occupants,” Wilson Martin reports.

Marsette adds that the town also purchases the most full-efficient vehicles possible for its 200-plus municipal fleet. “We have hybrid vehicles and currently, one all-electric vehicle, with two more on the way,” he says. “We’ve been working with the Operational Services Division and the Metropolitan Area Planning Council on a state-wide bid for the procurement of electric vehicle charging stations, anti-idling technology for large vehicles, and hybrid ‘up fit’ technologies for large vehicles.  We are very excited about the use of these new technologies to help reduce fuel usage and prolong the life of our vehicles. In the past, we’ve looked at alternative fuels for our fleet, such as compressed natural gas, but right now, with the low cost of diesel and unleaded fuel, that’s not really viable for us, so these up fit technologies to add hybrid to, say, a sanitation compactor, are very intriguing.”

But perhaps Natick’s most environmentally-friendly initiative is its drive to “solarize” the town wherever and however it can. “By the end of this year, we will have nearly two megawatts of solar on six schools and four municipal buildings,” Wilson Martin says. “Combined, these systems will provide enough power to meet more than 20 percent of municipal electricity needs.”

The community has followed suit, and Natick has the highest solar capacity of any community in the MetroWest region of Boston. A key driver of this adoption has been the presence of Solarize Mass Natick, a state-sponsored program that strives to make going solar simple and affordable for residents and small business owners. “Solarize Mass Natick is setting a new record for the state,” Wilson Martin explains. “More than156 residents and small businesses will add another 1.2 megawatts of solar to our community this fall.”

Finally, Wilson Martin says that the town is pursuing the development of solar canopies over municipal parking lots and is working to purchase net metering credits from area solar arrays. “By serving as a host customer for local green power, we can reduce our electric bills and help facilitate the region’s transition from fossil fuels. It’s a win-win for everyone.”

Natick, Massachusetts may be an old New England town, but, by applying such a broad array of sustainable best practices and environmentally-friendly programs and initiatives, it certainly ranks as one of the most forward-looking municipalities in the Commonwealth, and perhaps in the nation, as well.

Check out this handpicked feature on Pacific Biodiesel – Supporting Community Based Biodiesel.

WHERE: Fifteen miles west of Boston

BioBag – BioBag is a world leader in providing bags and films for the collection of organic waste for the purpose of composting. Unlike regular plastic bags, BioBags are made from a resin derived from plants, vegetable oils, and compostable polymers, and can be consumed by micro-organisms that live in the soil. Because of this, BioBags can be readily composted along with organic waste at municipal composting facilities. – www.biobagusa.com 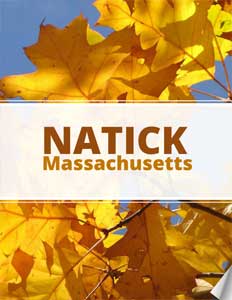