Farmington, New York – All part of the plan

All part of the plan

Founded in 1788, the Town of Farmington, New York was part of the Phelps and Gorham purchase, which included six million acres of land in what is now Western New York State, for the staggering cost (at the time) of one million dollars. Many of the town’s earliest settlers were Quakers, arriving from Berkshire County, Massachusetts. Today, Farmington’s 15,000 residents enjoy life in this friendly community in the scenic Finger Lakes region, with convenient access to downtown Rochester just 15 minutes down the highway.

A gem of Ontario County, Farmington was historically known as a quiet rural farming town. That has changed over the last two decades due to growth in the residential, commercial, and industrial sectors, and a 25 percent increase in population. “When I first came to Farmington 20 some years ago, it was really a pass-through community,” says Ron Brand Director of Planning and Development. “It wasn’t considered a destination. Over the past 23 years, a lot has changed.”

An old community with a rich and diverse history, Farmington is home to several historic buildings, including an 1816 Quaker meetinghouse, currently undergoing a restoration which began in 2006. The meetinghouse has a long history of leadership in the social reform movements of the 19th century, including participation in the Underground Railroad system. The site is listed on the National Register of Historic Places, the National Park Service’s Underground Railroad Network to Freedom, and the National Collaborative of Women’s History Sites. Lyons National Bank has restored one of Farmington’s oldest farmhouses, known as Hathaway House, keeping the original components of the house. As Brand describes, “They preserved the farmhouse in its original condition to include the stone cellar walls and flooring and made into a community center. Attached to it is a bank, which has a barn-like design with drive-up tellers on the opposite side. It is a great example of historic preservation.” Farmington also has the largest concentration of cobblestone homes within one community in Western New York. 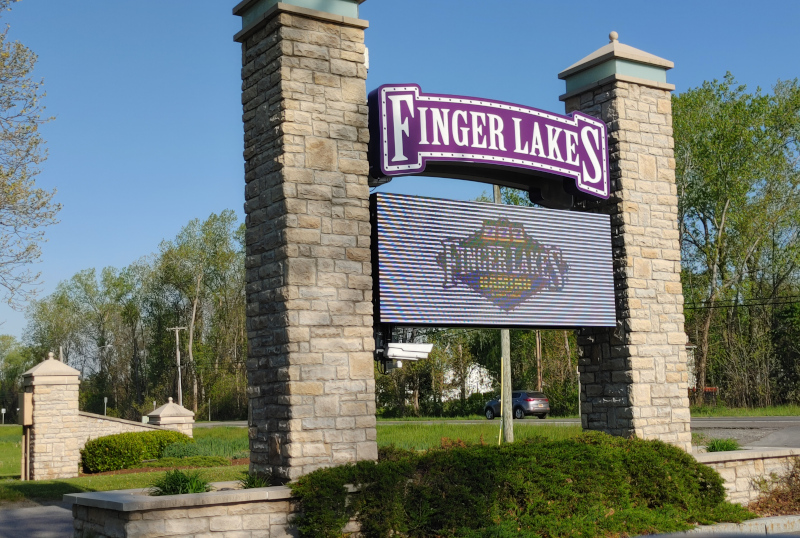 Currently without a designated downtown, Farmington’s ten-year comprehensive plan defines an area of focus for a future Main Street development. Brand reports, “We have adopted regulations for creating streetscapes, complete with design guidelines. We have several businesses that have started to renovate their sites – creating sidewalks, streetlights, benches, and landscaped areas, all along Route 96. That is the Main Street corridor defined in the comprehensive plan. We are trying to focus that effort to create a center of the community.”

Finger Lakes Gaming and Racetrack is a popular attraction in Farmington, with 44,000 square feet of gaming and live horse racing on 450 acres. Opening its doors in 1962 as a racetrack, the venue has hosted some of the sport’s greatest jockeys and thoroughbreds. Video gaming machines were added in 2006, creating a full entertainment destination, complete with live music and dining options. Not only is it an entertainment hotspot bringing visitors into the community, the casino and racetrack is also the largest employer in Farmington.

With a recently opened one-million-square-foot distribution facility, FedEx is another major employer in the town; along with Leonard’s Express, a family-owned nation-wide trucking company. Lumber is also big business in Farmington, with companies like National Lumber, who supply products to both a wholesale and industrial customer base. “We also have a New York State Police Troop E Headquarters here, which services several counties in western New York, from Lake Ontario to the Pennsylvania border,” says Brand. “They have just added a building addition for new office space and a separate forensic science lab building – the first one outside of Albany to serve the needs of Western New York and the law enforcement community.” It is anticipated that the community will also begin to see a rise in technology industries. Evidence of this has just been announced at the Akoustis Technologies site in the adjacent Town of Canandaigua. Ontario County has established a fiber network which goes throughout the County, including Farmington, creating an increase in smaller technology-based companies occupying previously vacant space and resulting in new flex base building sites.

The town is expecting to see continued population growth, as Brand recounts, “We’ve had a surge in residential development occurring in various forms – single family, detached townhomes, apartments, even manufactured home parks. All of that has contributed to the planned and orderly investments that the town has made in its infrastructure and our location. As a result, we continue to see interest, growth, and development occurring. Last month, we had three new applications for subdivisions and commercial developments. There is a light at the end of the tunnel but it’s not very bright yet. We continue to strive to meet the needs of every sector of our growing community.” 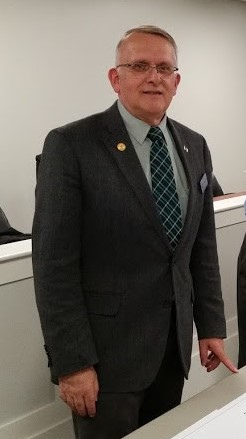 Town Supervisor Peter Ingalsbe describes other infrastructure projects currently underway to keep up with the growing community. “The streetlight conversion to LED is in process now. We are replacing a 55-year-old water tower and adding a new water line from the town of Canandaigua into Farmington to ensure we have enough water available. In 2008, we did an upgrade of the sewage treatment plant and then we did another one in 2014 to keep up with the growth. There are also plans to install an electric vehicle charging station in Beaver Creek Park, a highly concentrated area of town. There’s going to be approximately 800 homes in that area when it is built out. That will be the first active park location connecting several linear trails, sidewalks and bike lanes to the park and to the regional Auburn Trail.”

The Town of Farmington has been working with MRB Group, an engineering and architectural company from Rochester, with offices located elsewhere in New York State and Texas, for 40 years. Recent capital projects include pedestrian bridges, a renovation plan for expanding the town hall, and a new 46,500 square foot, energy efficient, sustainable highway facility. Having a valuable understanding of the town’s infrastructure, MRB Group also provided input into the Beaver Creek Master Plan which links active and passive recreational facilities in this area. Fisher and Associates, another engineering firm in Rochester was recently part of a project to link trails in Farmington to the larger Auburn trail, a state initiative to connect parts of Western New York. “Fisher Associates is a transportation engineering focused company,” says Brand. “They do a lot with state and federal highway programs and they work all across the country. They bring a great deal of expertise to the table, and we were very pleased with their efforts to get the Auburn Trail project approved.”

The newest portion of the Auburn Trail is directly across from two large developments, with more than 800 homes combined. Brand points out, “We noticed as they were building out Auburn Meadows that the first lots were built near that trail. Now with the Hathaway Corners project, we are seeing the first homes going up right adjacent to the trail. It is a very good attraction and people want to be nearby. Very rarely can you drive by and not see someone walking on the trail.” Ten years ago the town made it a requirement that every new subdivision put in a sidewalk network linking to the Auburn Trail.

Beaver Creek Park contains a total of 87 acres of planned active and passive recreational opportunities within the center of three residential developments. The land was donated to the town by A & D Real Estate Corporation, one of the first developers to come into Farmington. The town has a plan in place to develop the parkland into a space for recreation and community gathering. “There will be three sports fields, a tennis court, basketball court, bathrooms, an EV charging station and walking trails,” says Ingalsbe. “We are planting a lot of trees and bushes throughout the area and, in 2023, we have a plan to add a lodge that would accompany about 90 people for special events.”

With intentions to continue projects to develop Farmington and support the needs of the growing community, the town has a 10-year comprehensive plan in place. Brand emphasizes, “We take pride in the fact that when we identify implementation actions in our planning document, that they are indeed implemented. It holds the town board accountable to their decisions, helps them in preparing budgets, helps them in capital expenditures, helps them into defining resources that they need to protect and to provide services and programs. All in all, it is an ongoing continuing program that never ends.”

Once they’ve completed the tasks, they add other tasks to the document’s priority list. There are three different lists in the planning document. Brand explains, “One is the high priority, those things that we want to accomplish in five years, then we have the medium priority projects to be accomplished by the end of the 10-year planning cycle. The third category is ongoing. Those are the projects that have been underway, exist and will continue to exist. They get tweaked as technology changes, as new ideas come along.”

It is no coincidence that Farmington is maintaining its rural charm, while improving its modern amenities. It’s all part of the plan. Although it is known as the “Gateway to Ontario County”, Farmington is a destination all its own.

What: A welcoming, growing community; population 15,000

Where: 25 miles southeast of Rochester, NY

Being accessible, responsive, attentive, following-through and having a timely recovery process for unforeseen events are critical guiding principles you need in a consultant. We not only embrace these principles, they serve as the foundation of the way we conduct business. We are your advocate from start to finish.

MRB Group is an engineering, architecture and planning firm that specializes in municipal services.  We’ve worked closely with Farmington for more than 50 years, providing design and planning services for the community’s growing infrastructure, while our SmarterLocalGov team members support the Town’s professional planner and municipal staff.  Farmington’s consistent growth is a direct result of the quality of life residents enjoy, thanks to dedicated, forward-thinking leadership, proactive municipal planning, and a strong commitment to making Farmington a great place to live and raise a family.  MRB Group is proud to support this vibrant community!

Since 1962, Finger Lakes Gaming & Racetrack has called Farmington home. Gaming was added in 2004 after operating 44 years as just a thoroughbred racetrack. Now with over 1,100 gaming machines, racing, dining and nightlife, nearly two million visit one of the largest entertainment destinations in the Finger Lakes annually.