Denville Township, population 16,000, is located in Morris County, New Jersey, in the north central part of the Garden State, some 35 miles west of Manhattan. The area was originally settled by Lenape Native Americans who were known to travel the Minisink Trail, an old Indian path that meandered through the dense forest to the coast of New Jersey. It is believed that European settlers, primarily Dutch and English from Long Island, Quakers from Philadelphia, and Germans began to come to the Denville area as early as 1690. William Penn and several other proprietors began to survey and stake out lands in the Denville area around 1715.

The naming of Denville can be traced to a “den” of wild animals located in the swampy regions along the Denbrook and Rockaway River. The animals would bask on a knoll that juts out into the meadows where they were hunted by the native Lenape. Others suggest that Denville’s name derives from Daniel Denton, who led an expedition into the interior of northern New Jersey in the late 1600s, and wrote the first English language description of the area.

Between 1730 and 1760, several forges and mills were erected in Denville along the Rockaway River and the Denbrook. Denville Village developed around the Job Allen Iron Works, and early developers of Denville, such as the Hussa family and A.B Crane & Co., were also intrinsic in shaping the area’s residential and lake communities. For most of its history, however, Denville was a farming community. It was formed as a township by an act of the New Jersey legislature on April 14, 1913. In the early 1920s and ‘30s, it was a resort town; today it is known as the “Hub of Morris County,” for its transportation routes, including Route 10, Route 53, U.S. Route 46, and Interstate 80, which pass through the township.

A mostly residential community, Mayor Thomas Andes says that Denville doesn’t have a lot of industry. “We have three relatively small industrial parks and a community hospital in town that’s our major employer,” he notes. “We also have a lot of hospital-related businesses, so medical is our major industry. We’ve got some other employers, but nothing of great magnitude. We have Anthony & Sons – they supply baked goods for all the restaurants in the area; we’ve got a business that manufactures electronic components; and a plywood manufacturer. They’re good businesses, but nothing in the Fortune 500.”

What Denville does have, though, according to Andes, is “a beautiful little downtown. We’re smack in the middle of Morris County, which doesn’t have a lot of downtowns – there are 39 towns and only a handful that have a downtown, which makes us special. It has a very wide main street, called Broadway, with diagonal parking and enough room for two lanes of traffic each way. It’s a beautiful street for parades and festivals and street parties. Every other week, we’ve been shutting down the main street and we have Denville After Dark. People come to shop and dine.”

Denville also has a deep and abiding sense of community spirit, which was most conspicuously on display in August and September of 2011, after Hurricane Irene devastated downtown, flooding 75 businesses and 350 homes. After the Rockaway River, which was already running high, was raised more than 16 feet after almost ten inches of rain fell overnight, four feet of floodwater raced through the community.

“The next day, people started coming into the Town Hall, bringing gift cards to help,” Andes recounts. “We collected $20,000 in gift cards. For three weeks, every night, a different group fed 250 people at the Town Hall. They also had a cleaning supply drive; people helped businesses clean out their stores; it was one good thing after another.” All community groups chipped in – the Police Athletic League, the Salvation Army, the Kiwanis, the Rotary Club, the PTA, church groups, the local high school. There were car washes, pancake breakfasts, and all types of fundraisers. Eventually, the community raised a half-million dollars. Even people from neighboring towns pitched in because they considered Denville to be their downtown, as well.

Andes, who became mayor four months after the hurricane, adds that the city also applied for some federal grants and over the next few years, Denville received over $1.5 million to help revitalize downtown with new street lamps, curb cuts, utilities, trees, garbage receptacles, and park benches – everything themed to match the town’s old-fashioned clock tower at the corner of East Main Street and Broadway, on the little point known by residents as “the triangle.” “We tied it all together,” he states, “and slowly but surely, one project after the next, we’re building a charming and quaint downtown.” 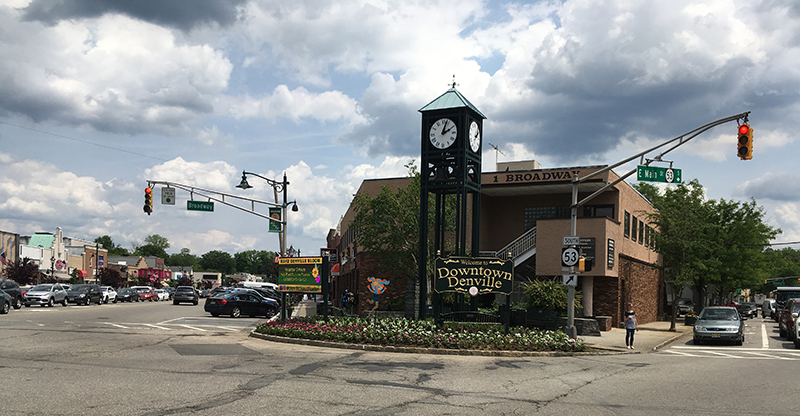 And the town continues to work on that image. Last year, Denville built a decorative wall around one of its downtown parking lots, and this year, it added green picnic tables along the wall. “The people liked it so much that we’re going to keep them there,” Andes says. In addition, because restaurants were shuttered in response to COVID-19, and since Broadway is still wide enough, the town allowed its downtown restaurants to extend their seating into the street’s parking spaces. “You can’t eat inside, but they have sidewalk cafés with places to eat outside,” he adds. “We want to be the town that the families come to – nice shops and nice dining.”

Regarding places for those families to live, Andes reports that while the town is mostly built-out, there is some redevelopment taking place. “New Jersey has an affordable housing mandate, and every town has an obligation,” he says. “Knowing that, four or five years ago, there was an abandoned cabinet factory along the railroad tracks, by the train station, that was behind in taxes. A developer came to us and he redeveloped it into a townhouse complex with an affordable component to it. And that turned out to be pretty successful.”

The main story that Mayor Andes wants people to know about Denville is that this is a town that beats the odds. It survived Hurricane Irene; its small retail businesses have “survived” competition from nearby big shopping malls; and it is surviving the coronavirus pandemic. “The town came together and they’re doing it again with COVID,” he states. “It’s a town where we all work together.” 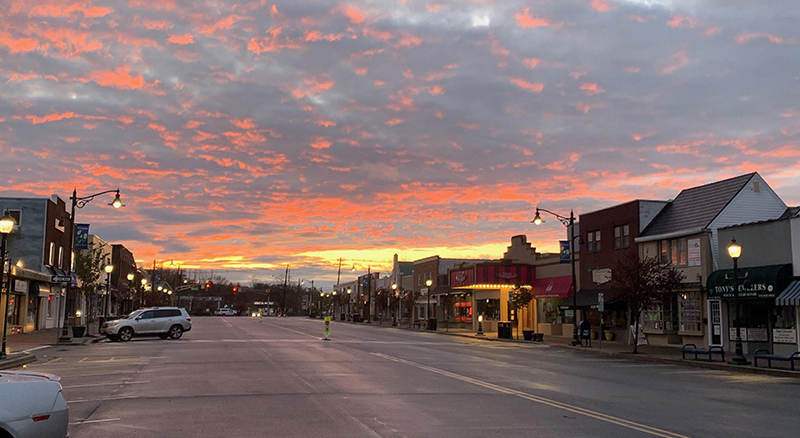 WHERE: In Morris County, 35 miles west of Manhattan

Saint Clare’s Health is a CMS 5 Star Rated and an award-winning provider of high quality, compassionate care, serving the communities of Morris, Sussex, and Warren counties. Its network of hospitals and healthcare facilities, including Denville Hospital, Dover Hospital, Behavioral health Center in Boonton Township, Denville, and Parsippany, and an Imaging Center in Parsippany, among other satellite locations. We pride ourselves on outstanding patient outcomes and experiences.
What separates Saint Clare’s Health from other hospitals is the commitment to both high-tech and high-touch! The multidisciplinary team of experts is committed to providing the most advanced, quality healthcare in a patientcentered environment that is tailored to meet the needs of each individual and their family. Offering the latest technology with 3-D mammograms, the first Accredited Bariatric Program in Morris County, the fastest ER, the nationally-recognized Center for Robotic Surgery, the area’s only certified Emergency Department in Morris County for Senior Care, as well as the Psychiatric Medical Care Unit are just a few of the outstanding services offered by Saint Clare’s Health.

Established in 1961, Einhorn, Barbarito, Frost & Botwinick, PC, based in Denville, New Jersey, is a full-service law firm devoted to serving a broad range of legal needs. In its more than 50 years in business, Einhorn Barbarito and its attorneys have earned a reputation for dedication to the community. The firm represents a diverse base of clients from individuals and families to public and private companies, entrepreneurs and long-standing institutions. The multidisciplinary team of attorneys leverages experience in areas of concentration including business and corporate matters, employment law, commercial litigation, personal injury and workers’ compensation, family and matrimonial matters, real estate and zoning issues, estate planning, special education, assisted living issues, criminal law, and tax law, and the firm has a strong appellate practice that touches on a variety of legal issues. The firm also provides counsel to small- to medium-size businesses on an as-needed, on-demand basis through its innovative On-Call for Business program. For more information, please visit www.einhornlawyers.com.

Provident Bank is a community-oriented financial institution offering “Commitment you can count on” since 1839. With $12 billion in assets, Provident provides a comprehensive suite of products and services for businesses and consumers through its network of 100 branches throughout northern and central New Jersey, eastern Pennsylvania and Queens County, New York. The Bank also provides fiduciary and wealth management services through its wholly-owned subsidiary, Beacon Trust and full-service insurance and brokerage services through its wholly-owned subsidiary, SB One Insurance Agency.