The Allen County War Memorial Coliseum in Fort Wayne, Indiana was conceived in 1944 by the residents of the area as a monument to those who gave their lives in service during World War II, as well as a civic center and venue for community functions and events. Ground was broken in 1950, and the building opened in September 1952 as a ten-thousand seat arena and fifty- thousand-square-foot exhibition facility.

The Memorial Coliseum quickly became the site of major professional and amateur sporting events, circuses, ice skating shows, religious gatherings, political rallies, civic and school events, and patriotic observances. Still owned  and operated by Allen County, today, the Memorial Coliseum serves the tri-state area as a focal point for family entertainment, arts and culture, sports, and community gatherings. It draws visitors from all over the Midwest and has earned a reputation as one of the most successful facilities of its kind in the country. 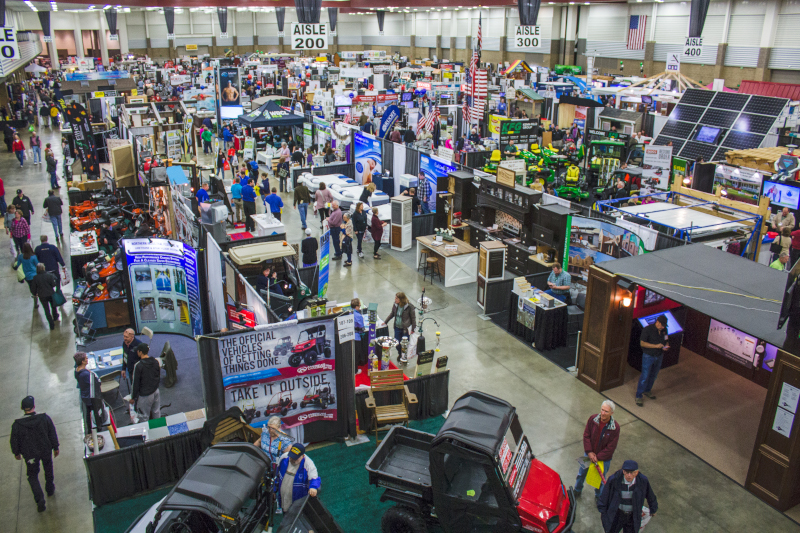 “We’ve gone 29 consecutive years hosting over a million people per year and our economic impact last year was $113,668,640, with 1,603 use days,” says Randy Brown, the Coliseum’s Executive Vice President and General Manager. “There are 500 employees that consider the Coliseum their place of employment. That’s a combination of the Coliseum; Aramark, our food service division; ESG, our security provider; and Leader Staffing, which is our part-time, temporary staffing firm. Over the last ten years, our cumulative economic impact has been over a billion dollars. So, we are a major economic generator for Fort Wayne and the greater Allen County community.”

According to Brown, who’s been at the helm for the past 31 years, one of his major responsibilities has been to keep the facility “relevant” by maintaining the physical plant as a state-of-the-art complex. Thus, over the last three decades, there have been continual additions, improvements, and upgrades to the Coliseum’s building and internal structures. The first major renovation occurred in the late ‘80s, when the $27 million Expo Center was added, with a gross footage of 250,000 square feet of new space, and another $7 million was spent for updates to the original building.

“That turned us from a so-so exhibit player to a much bigger regional player – number two in the state of Indiana,” Brown reports. “In 2000-02, we did a $34.5 million renovation of the arena and we actually raised the roof – a 41-foot, 10-inch raise. It took our seating capacity to nearly 13,000. We added 24 suites and 318 club seats – a total, top-to-bottom modernization of the facility.”

There have been other renovations over the years, the most recent being the construction of the Coliseum’s Conference Center in the south end of the complex. “It’s added 60,000 square feet,” says Brown, “and we renovated 15,000 square feet of lobby space. We’ve got a million square feet under roof, now, so for a ‘second tier’ facility, we’re already a big one. The new room, itself, Conference Center A, B, C, D, and E, is just a little under 28,000 square feet that can be subdivided into the five different rooms. It has a 29-foot ceiling, LED lighting, and very high-tech theatrical lighting. It’s another type of facility within our arsenal. Our pre-function lobby space, now, is approximately 20,000 square feet. The Conference Center also has four, 30-foot tall doors and can be opened to provide contiguous space with our Expo.”

Another recent improvement has been the addition of heated sidewalks. “All of our primary sidewalks leading up to the main entrances are heated, so we don’t have to scramble when it snows, or if there’s ice to remove; they will automatically be warm,” Brown notes. “That’s been a beneficial improvement. It’s a better safety situation, with some pretty significant labor savings, and it will also create some outdoor exhibit space.”

“Last summer, in the arena, we put a new video scoreboard and replaced all the ribbon boards at a cost of $1.6 million,” Brown continues. “And we’ve totally renovated all the rest rooms, the team rooms, and dressing rooms. They all have state-of-the-art heating and cooling systems, Corian countertops, LED lighting, touchless fixtures, tile floors, stainless steel toilet partitions – all those things. And we’ve created a new guest services training center. It has sit-down capacity, classroom style, for 60 people, so whether we’re talking guest services, or security personnel before a major event or concert, we’ve got a good environment. It has a 60-inch, LED TV so we’re able to use multi-media for exchanging information. And typical of most buildings of our type, security is a high priority, so we’ve dramatically improved our security command center with cameras, monitoring systems, and personnel training.” 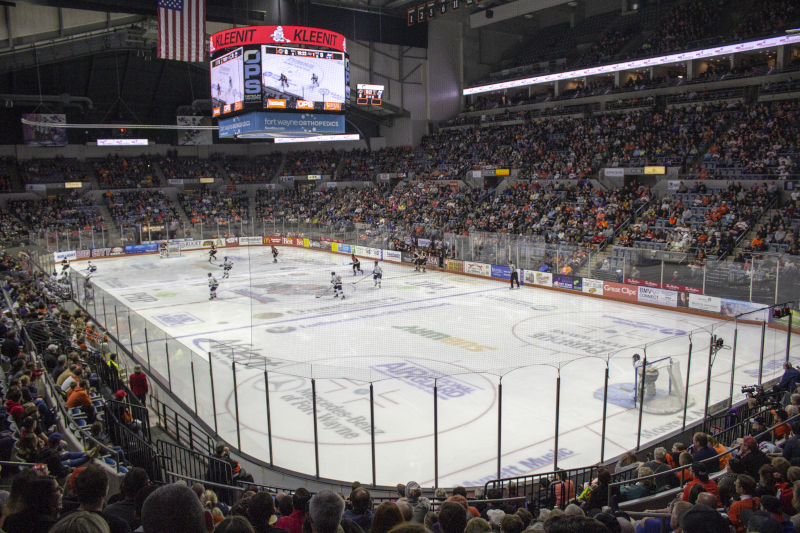 More improvements are on the way. Brown explains, “We’re in the process, right now, of having a digital antenna system or DAS. (DAS is a network of spatially separated antenna nodes connected to a common source via a transport medium that provides wireless cellular service within a geographic area or structure.) Boingo is the vendor who we’re contracted with for that. We continue working on changing our lamps from incandescent, quartz, or high pressure fluorescents, to LEDs. If we’re on track, we should have that finished in the next three to five years – a big investment. We’re looking at putting a new sound system in the arena – that’s a million dollar-plus investment. And we’re constantly replacing our computer infrastructure in terms of Wi-Fi and other digital services that are available. Compared to most buildings, our capital project list is pretty well-funded. We’re doing in the range of $1.5 to 2 million a year of improvements.”

Brown says he’s always looking ahead at the next generation of “necessary improvements,” because meeting and exceeding the expectations of the Coliseum’s guests and keeping the facility “relevant” has been instrumental in its success. Its five-year plan includes an expansion of the Conference Center from just under 28,000 square feet to 50,000. “Expansion continues to be on the horizon,” Brown states. “The original part of the building is 67 years old, but there’s not a lot of the 67-year old left.”

Brown also looks at containing costs. “We’re one of the few self-supporting properties in the country and it’s a matter of having more revenue than expenses,” he remarks. “Like I tell my staff: ‘gross does not equal net.’ You’ve got to pay attention to expenses. Utility costs hit us hard, last year, even with all the improvements we made. We reduced our kilowatt hour use by 288,000 kilowatt hours, but ended up still spending $100,000 more on electricity. Rates and transmission costs go up. Imagine if we weren’t making those improvements.”

Brown believes that in addition to making constant improvements that ultimately help maintain the Coliseum’s financial fitness, its fortunes are also intimately tied to recent improvements in the local marketplace. “Fort Wayne, as a community, has had significant growth,” he notes. “We have ten new hotel properties either opened or under construction. And that’s good, because in the past, we haven’t had the hotel space to be able to support all the events that want to come here. So, with the food scene being more developed and some boutique hotels that will be opened within the year, the hospitality scene has arrived.”

Change may be constant, but some things are timeless. For almost 70 years, the Allen County War Memorial Coliseum has been an integral part of the lives of Fort Wayne residents and their neighbors. In addition to the countless number of concerts, sports events, ceremonies, weddings, graduations, exhibitions, and programs that have occurred there, the Coliseum also serves as the community’s major evacuation site. “When things go wrong, whether it’s bad weather or some catastrophe in town, like a fire, and people have to be evacuated, we’re frequently called into action,” Brown says. Indeed, during the catastrophic flood of 1982, which put Fort Wayne on the national map, the Memorial Coliseum served as a shelter and command post for relief efforts. And when disaster strikes, the Coliseum employees provide food and beverages, as well as a phone bank, so that people coming in for shelter can call their loved ones and let them know they’re safe. “So, there’s a real connection within the community for the Coliseum,” he adds.

And, of course, the Allen County War Memorial Coliseum is still a cenotaph – a monument to those who died in combat. “And everything we do is with veterans in mind,” Brown says in conclusion. “We support the veterans with events on Memorial Day, Veterans Day, Pearl Harbor Day. Parades are started, or end here, at the Coliseum. There’s an area of the building off the arena that’s called Memorial Hall. It has a number of plaques with names of those people who lost their lives in wars and conflicts. That relationship with the veterans is something we hold dear and we want to make it stronger with every opportunity that we can.”

WHAT: A multi-purpose arena