By Citizens, For Citizens

Wildwood, Missouri, once an unincorporated portion of St. Louis County, and an exurban suburb of the City of St. Louis, became an incorporated city in 1995. According to City Administrator, Ryan Thomas, the area was already a very popular one for residential development, but development gave very little thought to preserving the character of the area and the natural features of the land. “Developers were coming out here and clear-cutting large sites for residential developments and not really paying attention to the natural environment and the impact to neighboring residents,” he says. “And the regulations under St. Louis County government allowed for that.” So, the area’s residents decided it was time to take control of Wildwood’s future growth, by becoming a municipality unto itself.

“Shortly after becoming a city, within the first year, we adopted a number of new standards relating to development – specifically environmental protections,” Thomas says. “We required a more detailed analysis of each individual site that identifies important, natural features such as creeks and other drainage ways, steep slopes that are more susceptible to erosion, or fragile topography that was best to be avoided. Basically, it provided for certain portions of various development sites to be left untouched. As a result, we ended up with a lot of developments that, at first, were a bit of an adjustment to what the home builders were accustomed to doing in the past. However, in the end, they ended up with much nicer developments with major areas that were left undisturbed and that had mature trees. And they saw greater value in the homes they were able to sell because there were trees still there – it wasn’t just a massively cleared site; it fit into the natural environment much better.”

Also, within the first year, the new city of Wildwood adopted its first Master Plan. “The Master Plan is very comprehensive,” Thomas explains. “One of the primary areas of focus was land use. We identified distinct portions of the city that would be designated for certain uses.” The Plan distinguished among three primary categories. The first was the suburban/residential, “which are the traditional subdivisions that had been built around the area, and tend to be quarter-of-an acre to one-acre lots,” says Thomas.

“Then, there are some rural areas, mostly in the western half of the City, that make up a good part of Wildwood, which is located right at the foothills of the Ozark Mountains,” he continues. “So we start to get some really hilly terrain which makes it difficult to develop higher density. Also, some of the public utilities, such as sewer and water do not expand to those areas. So, they’re designated as non-urban and provide for a minimum density of three acres per lot. We also have a number of very large state and county parks within the city, and, obviously, those do not get developed and remain an important asset to residents and visitors.”

“At the center of our city, we established an area as our primary commercial district,” Thomas adds. “It was all established on the basis of creating an area that had the same look of the older towns of the past, with a traditional main street, buildings fronting the street with parking to the rear. And it’s been done with a mix of both commercial and residential uses – it’s an approach known as New Urbanism.”

When the city first incorporated, it had a population of about 16,000; today Wildwood has about 36,000 residents living in all areas of the city: the town center, the suburban/residential, and non-urban areas, as well. “The development standards established by the City, early on, have now resulted in nicer developments that have attracted more people to the area,” says Thomas.

Today, Thomas reports that the city is working to increase employment opportunities for those residents, many of whom still commute to St. Louis for work. “The residential developments have happened organically,” he says, “but we’re trying to promote more retail and office development to complement the residential and bring more employers for residents of Wildwood to also work in Wildwood. In the past year or two, our City Council has started to give much more emphasis to economic development – trying to do more to promote commercial development in our town center.”

At present, one of the city’s nascent economic drivers, according to Thomas, is its growing reputation as an outdoor recreation hub for the region. “One of the biggest assets that we have since becoming a city is an extensive trail system,” he reports. “That’s become a very popular thing among residents, and it’s also caused people from other parts of St. Louis to come out and enjoy our trail system that ties into some of the parks and key neighborhoods and our town center area. And that’s continuing to develop. While it wasn’t the focus when the city incorporated, we’ve started to develop a brand of being that locale for outdoor recreation. And now, we’re trying to build upon that brand in our economic development.”

In addition to its trails and the state and county parks and reservation areas that dot the city, Thomas says that Wildwood’s rivers are a draw for boating and fishing, and, in the winter, its ski resort, Hidden Valley, is the only one within a several hundred-mile radius. “We also have a pretty large horse community – equestrian enthusiasts and horse owners in some of the rural parts of Wildwood,” he says. “And a number of the trails are open to equestrian use as well.”

When Wildwood first became a city, it was founded with the notion that local control would help foster more responsible development, preserve the area’s natural environment, and elevate its residents’ quality of life. That decision has resulted, among other things, in better maintenance of the local infrastructure. “St. Louis County didn’t give our streets and bridges as much attention as we’ve been able to,” Thomas declares. “We were not seeing a great deal of maintenance before Wildwood incorporated as a city. We had about 50 bridges, and many of those were either in a sub-standard condition or were functionally less than desirable. We had many one-lane bridges, which, when first built, were probably fine, but with the population moving out here, had become a problem. So, one of the major financial allocations, early on, was to address some of the bridges. We’ve replaced close to half of them since we incorporated and we’ve been able to do so with the help of a lot of federal grant funding. We were very successful in applying for federal transportation grants to fund, in most cases, 80 percent of the cost of those bridge projects. So, In terms of improvements, we’ve been able to build the type of infrastructure that the people who live out here, want.”

Wildwood also provides its residents with very cost-effective city services. The city team is small – there are only 20 full-time employees. So, it relies a lot on private contractors. “We contract with the St. Louis County Police Department for law enforcement and neighborhood safety,” says Thomas. “We don’t have street or parks maintenance crews. We conduct an annual bidding to establish maintenance contracts with numerous local contractors, and by doing so, we use them when we need them, and when we don’t, we’re not paying somebody. So, it’s been a very cost-effective approach to maintaining our infrastructure and the public spaces that we’re responsible for.”

Thomas maintains that the city of Wildwood will always to be a popular place to live. “But we hope that we can also make it a place where people can both live and work,” he asserts. “There is some of that, to a degree, now, and we hope that we can build upon that and see our town center area flourish and create more opportunities here. And, we’re trying to establish Wildwood as not only a great place for its residents, but we’re trying to add a tourism piece and make it more of a destination for outdoor sports and recreation, as well.”

As Wildwood continues to grow and mature, it’s clear that this former suburb of metropolitan St. Louis will always be a city by and for its citizens – citizens who have taken control of their own town and their own destiny.

CIMCON Lighting – Lighting the way to... 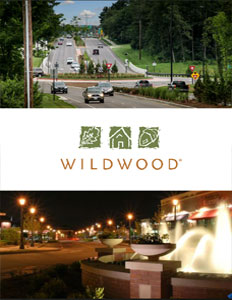