Westinghouse Lighting is a leading manufacturer and marketer of more than 4,000 lighting products, including light bulbs, lighting  fixtures, ceiling fans, and decorative lighting hardware for consumer and commercial applications. The company was founded in 1946, in Philadelphia, as a small, family-owned business called Angelo Brothers Company. “It was my father and one of my uncles,” says Ray Angelo, current company President and CEO. “They thought they were starting a paint and hardware store. Through a number of twists and turns, a lot having to do with the booming economy after World War II, they wound up wholesaling lamp parts and that became their niche, through the 40s, the 50s, and into the 60s – selling all kinds of lamp parts, glassware, and lighting hardware for both repair and replacement purposes.”

According to Angelo, during those first decades, Angelo Brothers sold their product lines through the established channels of electrical distributors and lighting showrooms. “Many of them had lamp repair,” he says. “Back in the day, people actually fixed their lighting fixtures; they were no different than other electrical products. So, our company always had a good reputation in those channels.”

The second generation of Angelos came into their own in the 1960s and early ‘70s, during a period when the hardware/home center industry was developing in the U.S., in earnest. “Every region of the country had regional chains – the Pergaments, Rickel, Channel, Two Guys,” says Angelo. “Our customers used to tell us that we were the company that was in the most chains, nationally, because we had this line of lamp parts and lamp repair and we were the lead player in that niche. It was a go-go period for pretty much anybody supplying a hardware/home center, because you had these regional chains that were very healthy at the time.”

When major national chains, such as Home Depot and Lowes began to consolidate in the ‘70s, the company experienced another period of high growth. “We opened distribution centers around the country,” Angelo continues. “We couldn’t keep up with our customers and we were the go-to player in the market for those product lines. Meanwhile, all along, we were still selling to electrical distributors and lighting showrooms. So, we were still in all the channels.”

The third stage of the Westinghouse Lighting’s growth, according to Angelo, came about in the late 1990s, when the company decided to assume its new name. “Our company always had a good reputation, but never had a real brand name; we had a trade name as Angelo, but not a consumer name,” he says. The original Westinghouse Electric Corporation, from which the Angelo Brothers derived its new moniker, was a major American manufacturing company and pioneer in the field of power generation and transmission, as well as the design and manufacturing of household electrical products including radios, televisions, and electric appliances of all kinds.

In the 1990s Westinghouse Electric sold off many of its operations. “They sold their lighting division, lock, stock, and barrel to Philips, the number-one lamp maker in the world (in the industry, we call ‘light bulbs,’ ‘lamps’), who wanted to establish a presence in the U.S. market,” Angelo explains. “So, they purchased Westinghouse – the staff, the factories, all aspects of it – and, rather quickly, cut over their whole line and branded it completely as Philips.”

Meanwhile, Westinghouse Electric, which had evolved into the CBS Company in 1995, and changed its name to the CBS Corporation in 1997, still owned the Westinghouse “brand” and surmised that it might have some value as a licensed brand name. Says Angelo, “We were on their short list, being the largest non-branded lighting company. The only brands the consumer knew were G.E., Sylvania, and Philips. We had assumed that Philips had purchased the rights to the IP (Intellectual Property), and it turned out, they didn’t.”

Angelo says that the lighting industry is tremendously competitive. “Dozens of small to mid-size companies compete aggressively and hundreds of import companies are always trying to get into the U.S. market,” he states. “So, we were intrigued when the brand became available because we saw that, as a privately-held, trade name company, we were going to be in a slow-growth mode because the giants were making it more difficult for us. So, we were the first major company that worked a licensing deal with CBS Corp. to be able to use Westinghouse in our company name. And to this day, we are one of a handful that can. We’re still owned by the Angelo family, but we trade as Westinghouse Lighting. And that propelled us into this third phase of our growth for the last 15 years or so. And enough time has gone by that that’s how we’re known, now.”

Joe Catrambone is the company’s Chief Operating Officer. He details Westinghouse Lighting’s global reach: “We currently have hundreds of employees located all over the world,” he begins. “In Asia, we have staff in southern China focused on factory sourcing and quality control. This is in addition to staff located in Hong Kong with a primary focus on PO (Purchase Order) expediting, working with our vendors, and making sure everything ships on time. There is also a dedicated staff to cover our administration, HR (Human Resources), and finance functions for our Asia operations. We have two distribution centers in the U.S. – one on the west coast in Chino, California, the other one here as part of our corporate headquarters in Philadelphia, PA. In addition to the U.S. operations, there are operations in Panama for Latin America; Germany for Europe, and Montreal for Canada.  We also have exclusive, distributor-type relationships abroad in Southeast Asia and the Middle East, with conversations for expansion in Australia and Russia. That’s, pretty much, today’s landscape.”

Angelo believes that being in the lighting business for 70 years, and now having the Westinghouse name, helps the company play to its strengths. “We’re the only company that has a branded product line for lighting fixtures, light bulbs, ceiling fans, and all of the associated accessories to go with them,” he declares. “We’re not a huge company, but we know our business. We’re relatively lean from a management structure and much more nimble than the giants we compete against. And we have a brand that our smaller competitors don’t have. That’s what we’ve been emphasizing the last five to ten years.”

Catrambone concurs, adding that the company’s bundled approach provides an economic value to its customers. “They are able to purchase multiple product categories on one purchase order, one invoice, dealing with one service center,” he says. “And because we’re privately-held, it allows us to be nimble and flexible in reacting to changes in the market place. We’ve worked hard to create an infrastructure that allows us speed-to-market. When the Recession hit, we took a look at our infrastructure and our fixed costs. At the time, we had four distribution centers in the U.S. that were built decades ago, in order to accommodate these emerging, national chains: Ace, Tru-Value, Lowes, Home Depot. Since that time, they’ve created their own distribution center networks. So, we decided to consolidate. We moved into a larger facility in California and implemented a new replenishment system; at the same, leveraging consolidation warehouses up and down the coast of China via our freight forwarder to accommodate our expanding vendor network in order to get cost-competitive. On the U.S. side we created a hub-and-spoke model which allowed us to shorten in-transit time by 20 days compared to flowing to the east coast. Everything is predominantly landing on the west coast, so we have a constant pipe-line moving from west to east in order to accommodate the East coast and reducing our inventory carrying costs. Our customers have come to know us as being able to accommodate their needs and exceed their expectations both from the manufacturing end on through to the distribution transaction.”

Dave Gatto, a 26-year company veteran, now heads up compliance, in a new position created to deal with the ever-changing legal and regulatory environment of the lighting and electrical products industries. “In the old days,” says Gatto, “we really didn’t need a compliance person, because safety certification was the only regulation we had to deal with. The regulatory landscape really started to change here and in Europe back in the late 1990s, and has definitely impacted our business. The cost of compliance is very high and the engagement needed for us both to be aware of, and involved in, the regulatory landscape is a major investment for the company. We have regulatory impact on the federal side, via the Department of Energy, for current products and there’s some active rulemaking going on that will affect products that aren’t currently regulated; with the Federal Trade Commission for package labeling; and at the state level. A variety of states have individual, either regulatory efficiency standards or, in some cases, regulatory environment standards. California is probably the best example, because it has some of each.”

“That is why Dave is constantly in D.C., and is part of all these industry-formed committees,” says Catrambone. “But we also have to have eyes and ears and feet on the ground, globally. With our presence in Germany and a global supply chain point person, we’re able to maintain a horizon view on regulations set by the EU. Our Asia team also works closely with all the accredited facilities both in China and Hong Kong from a global perspective because there are also changing regulations in Indonesia and the Philippines. The least impacted part of the globe, today, seems to be South America, but nonetheless, we’re forced to have the eyes, ears, and feet on the ground, there as well, in order to remain proactive in any applicable spec changes or tweaks needed in our product on the manufacturing side to ensure compliance.”

Even with the plethora of compliance issues it has to deal with, Angelo believes that the Westinghouse Lighting’s best days are ahead. “When I look at how we’re positioned, now, in each channel, I see us being able to grow in every one we’re in, with e-tail growing the most rapidly,” he asserts. “We still have that touch and flexibility of a family business. And because we have this supply chain ability and this nimbleness, we’re able to bring new products to market. At a minimum, every product line gets refreshed, every year. LED lamps, as an example, are getting refreshed every two months, roughly. There are new items that we’re launching; some are completely new replacement lamps, some are improvements. Maybe it’s one watt less than the previous generation, maybe it’s a hundred lumens brighter. So we have this fast track, product pipeline with a brand. I see no reason why we can’t grow in every channel.”

The old Westinghouse Company used to have an advertising motto: “You can be sure, if it’s Westinghouse.” Today, that name and that promise rest with a different company, but one that can also be relied upon for quality products and great customer service. Or as Joe Catrambone says, “We do what we say and say what we do.” 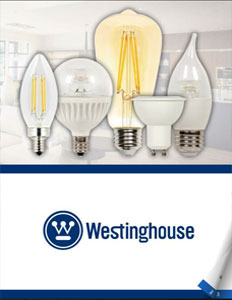