Town of Yarmouth, Nova Scotia – On the edge of everywhere

On the edge of everywhere

In a time when people are looking to get away from it all and enjoy the beauty of nature and quality of life, Yarmouth, Nova Scotia checks all the boxes for peace, beauty, comfort, amenities and adventure.

The port town is at the edge of the country, flanked on three sides by the majestic Atlantic Ocean and home to much of Canada’s early history. It was among the first places explorers landed and helped spark the beginnings of the nation, and is now a place where people can begin a life filled with natural wonders, strong and friendly community, recreation, and powerful high-speed internet that allows those working remotely to escape the hustle and bustle.

Mayor of the seaside town, Pam Mood, refers to Yarmouth as “the best piece of real estate on earth” and is convinced that once people visit, they are hooked by magnificent scenery and the people. She boasts, “We are among the friendliest people on the face of the earth. Our tag line is ‘On the edge of everywhere’, but it could have easily been ‘on the edge of everything’, because we’re very forward thinking, always two or three steps ahead and continually view things on a global scale, and take steps to either keep up with or get ahead of the rest of the world.  It all draws people and keeps people here.

Yarmouth offers limitless opportunities for business owners to ship products all over the world, but especially to break into the eastern U.S. market.   Natalie Smith, Economic Development Officer for the town says another reason Yarmouth is attractive for both people and businesses is the relatively low cost of living and cost of doing business, as compared to most of Canada. She shares, “Overall, even with the pandemic, Nova Scotia and especially the Town of Yarmouth and Yarmouth County, are really attractive for cost of living. So, even though our real estate prices have gone up, it’s still very affordable. I think that’s what attracted more people to relocate here from Ontario, Actually, I would say cost of living, which includes quality of life and doing business with the U.S. draws people here as well.”

That popularity is something the hidden gem hadn’t experienced in the last decade, and since 1991 it was slowly declining. But recently, the town’s permanent population just passed 7,000, and is growing. With one of the most moderate and temperate climates in all of Canada, the number of residents in Yarmouth and the surrounding county swells in the warmer months – adding more than 25,000 people and a significant seasonal boost to the economy.

The Town of Yarmouth acts as a service hub for the entire region and its population of over 60,000, offering the nearest grocery stores, government services, health care, retail, and more. Jeff Gushue, Chief Administrative Officer, says he moved to Yarmouth 30 years ago for the people and the climate. He notes, “We are too big to be small and we’re too small to be big – meaning Yarmouth is a big enough town in that we have a lot of amenities and opportunities that typical small towns don’t have, and when I say, we’re too small to be big, we don’t have the big city problems, at least not in abundance. So, we’re still a small town in character, yet we have enough amenities to make it enjoyable.”

The biggest industry in the area is the fishery, which makes up the bulk of employment, with hundreds of independent business owners working through Fisheries and Oceans Canada. The government is the next largest employer, operating both the Yarmouth Regional Hospital and the Tri-County Regional School Board.

Although the current housing inventory is low, there are several applications for developments of all sizes in different stages of the planning process, with some in the permit stage and others in the financing stage. Smith believes in the coming years the housing stock will offer enough space for all those who wish to relocate.

There are buildings currently being repurposed in the downtown core. According to Gushue, “A developer is in the process of redeveloping the town’s former high school. It’s expected to offer 54 dwellings…we’ll give it new life, right in the center of town.” The hope is to put people in the newly revived downtown district that’s been a decade in the making. The revitalization project was awarded a 2022 National Urban Design Award for its impact on the surrounding environment. Completed in the spring of 2021, the redevelopment focused on beautification, while creating a pedestrian-friendly, accessible downtown with a coastal vibe, using lobster cars throughout the downtown to show off Yarmouth’s largest industry. 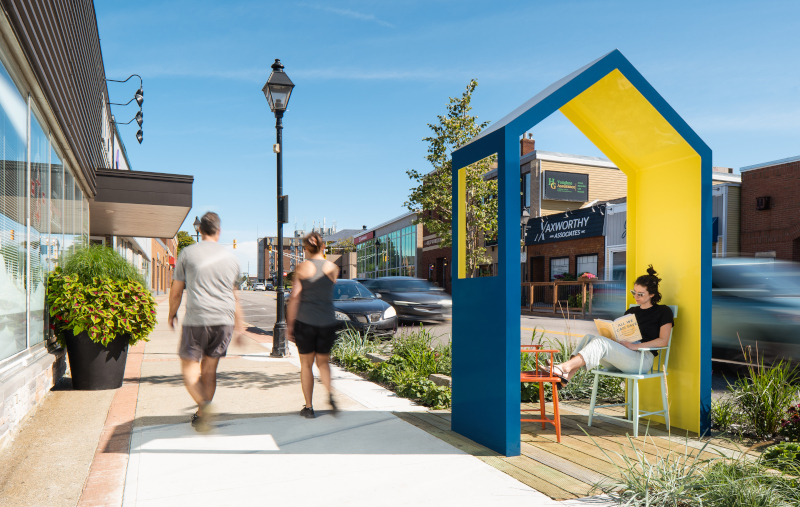 Mood says the study behind the project was commissioned in 2009, but not put into action. When she was elected in 2012 they dusted off the plan and put it in motion after years of an economic downtown and losing the ferry service to Maine. She admits, “We had been in that downward spiral… So, to say we were in an ugly position would be an understatement. The proof is in the pudding because 10 years later, we now have a magnification downtown with, I would say, just about full engagement.” Part of that engagement from business owners came in the form of a facade program that was pivotal. Mood adds, “People would laugh and say, ‘that mayor thinks that paint will fix everything’ – it did. Nobody s going to start a business in between two businesses that look like they should have a wrecking ball taken to them, and the businesses stepped up, they painted, and it just instilled the pride. A little touch of paint means that more businesses move in.”

Yarmouth is working closely with its municipal partners to accomplish a future expansion to its recreation facility. Currently tagged as a $30 million project, upgrades to The Mariners Centre will include adding on to the complex that currently contains a dual ice rink, with a pool, walking track, fitness facilities, and much more. The town is in the midst of applying for provincial and federal funding for the project. Construction work isn’t disrupting recreation, though, because the building presently hosting those services is still in operation.

Although the town’s water and stormwater management plan doesn’t comply with current federal standards, the 35-year-old system was so ahead of it’s time they’ve been given until 2040 to upgrade. The system is so strong that it’s providing services to the surrounding area and also saved a lake in the community. What was once unusable in the ‘80s is now a thriving recreation focal point for residents and tourists.

In the near future, Mayor Mood would love to see every storefront in the downtown filled, housing at different economic levels for all people, and the creation of a waterfront development plan.  Smith wants a larger variety of businesses downtown with more mixed-use operations, and is thrilled to see the ferry back up and running, which will bring more people to the town.

As for Gushue, he is hoping to grow the town into surrounding areas to help each municipality benefit from partnerships, and even amalgamation. In the short term, he says, “I’m looking forward to the post-pandemic world. The ferry, thankfully has resumed and we are hopeful and optimistic that we’ll benefit from a post COVID-19 travel boom, and that we’ll be able to open our doors to the rest of the world once again.”

What: A thriving, scenic port community

Town of Johnstown, Colorado – Growing with...