Situated on the seaside with craggy cliffs looking over the Long Island Sound and bounded on the south by the Peconic Bay and Peconic River, Riverhead is a New York community that is definitely on the grow. The town has historically served as a gateway to the Hamptons, the East End, the North and South Forks of Long Island, and the U.S. Northeast. This role has led Tracy Stark-James, Executive Director of the Riverhead Industrial Development Agency (RIDA) to coin its slogan, “All roads lead to Riverhead.”

Founded in 1792, this diverse community of approximately 33,000 locals has seen a population boom since early 2020. The influx of newcomers out of Manhattan shifted its purpose from being a gateway and tourist destination to a year-long beach haven – a “very unusual” phenomenon for the town, according to Yvette Aguiar, Riverhead Town Supervisor. “Due to the pandemic, the entire North Fork, South Fork, and Riverhead has seen a large population growth, particularly since people wanted to leave New York City and enjoy the outdoors,” she explains.

Use of the Suffolk County seat’s well-established tourist attractions has gone into overdrive. The new neighbors flock to its four beaches, wineries, breweries, distilleries, nationally recognized golf courses, including Friar’s Head, Baiting Hollow, and Indian Island, and the Long Island Aquarium – New York’s only for-profit aquarium recognized as New York State’s only marine mammal rehabilitation and rescue service. And, after reopening in May, the award-winning Splish Splash waterpark has been an essential summer go-to. The list of available activities is endless, with water sports at the marinas, equestrian, and polo lessons. Locals can also easily take advantage of transport outlets to venture outside of the town’s borders, especially with ferry service and trains that link to Connecticut, New Jersey, Pennsylvania, and the Northeast.

“We really offer the best of everything, surrounded by water within a five minutes’ drive in every direction, yet close enough to Manhattan to enjoy the incredible opportunities that are offered by a major city,” says Stark-James. “And close enough to international airports that you can use to get away rather quickly.” 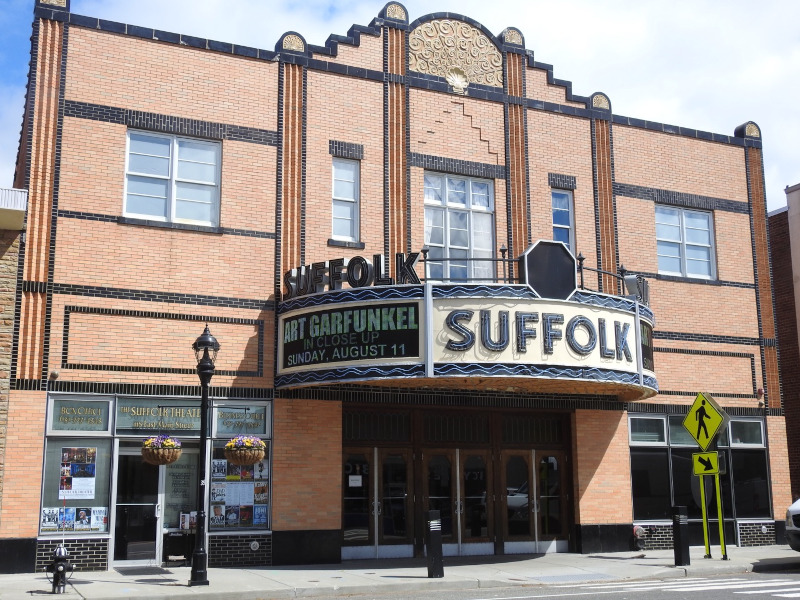 Back in 2000, the Navy closed the former 3000-acre weapons industrial reserve plant after contracting the Grumman Aircraft Corporation – now called Northrop Grumman – to build F14 Tomcat fighter aircraft and the Apollo Lunar Module there. “The Navy recognized that we were going to have, obviously, loss of taxes, incomes, and job opportunities, so they deeded it to us so we can develop it to stabilize our economy,” Aguiar explains. The space became beneficial to the public for recreational use after the town used three grants gifted to them along with the property to create a nine-mile trail surrounding it. Weaving through part of the Long Island Pine Barrens, the trail loop has become a popular recreational activity, especially during the COVID-19 pandemic, for locals wanting to bike, walk, and hike to catch the scenic vistas.

As for the town’s entrepreneurial ventures, Stark-James enthuses, “They are on the rise.” The upcoming Island Waterpark exemplifies that quality with plans to launch in September. The 50-acre attraction offers not only an indoor surf pool, but eco-friendly waterskiing, and a high-end restaurant, but will also offer hospitality internships in partnership with Riverhead’s school system. “That’s going to be considered similar to a Disney destination park for everyone out on the east end or anyone in our state, and we have the hotels to support it,” Aguiar says. In addition, the Stony Brook Calverton Incubator offers entrepreneurial incubation space and assistance at its agriculture/aquaculture focused facility to support and structure a growth pathway enabling farmers, start-ups and expanding businesses the opportunity to explore retail food production with less capital and risk. 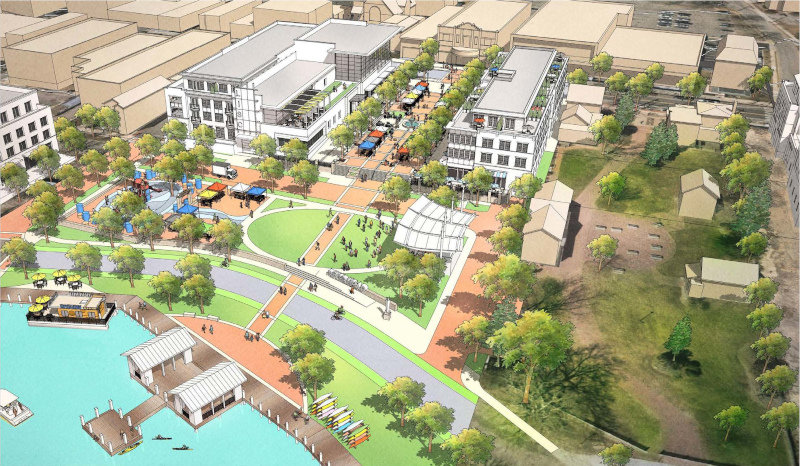 The growth continues with ongoing redevelopment, landing Riverhead Vision Long Island’s 2021 Smart Growth Award. Dawn Thomas, Community Development Director for Riverhead, led the town board’s several redevelopment projects during the pandemic. These include the revitalization of its downtown Main Street. Listed on the National Register of Historic Places, the street will feature an updated town square with easy access to the river parallel to it. The town board will use grants to demolish three old, vacant department stores next to the Suffolk Theater that are blocking the view of the river, sell property in the area for new buildings framing it, and connect Main Street to it with pedestrian-friendly access.

With an enhanced connection to the riverfront will come improved access to Riverhead’s boathouse, which stores kayaks, paddle boards, and rowing sculls for the town’s active rowing club. The updates will also make way for new public gathering areas for events and pop-ups, including an amphitheater, a potential ice-skating rink, and a playground. The new attractions will complement the 1930s art-deco Suffolk Theater. This versatile venue, with a planned expansion, offers cabaret style seating for multiple types of events, like dinner theater, musical performances, and parties in the town square.

Reviving Riverhead’s downtown has been a challenge to the town board. As Thomas reports, “A lot of the commercial transactions and the commercial businesses left the small mom and pop areas and went to bigger boxes and the internet, so our downtown was struggling.” However, the town board has brought in the public to assist in the planning process while involving the insight of expert consultants, Urban Design Associates, and Barry Long (President and CEO of Urban Design Associates in Pittsburgh), to tackle the project as a team effort. “That plan has been progressing with public participation all through Zoom, surveys, interviews, breakout groups, and many stakeholder meetings we’ve done,” Thomas says.

Alongside this project, the town board plans to use its newly adopted Transit-oriented Development (TOD) zoning code to redevelop a vacant, two-acre parking lot into a mixed-use property and revitalize the entire rail access area which connects downtown. “That was a difficult area for us to have blighted and under-invested in for quite a while,” Thomas says. She explains that the re-construction will draw more investment into the downtown – now a federal Opportunity Zone. Progress on project planning is steadily moving ahead after the town board received numerous responses for its Request for Qualifications for the new property. Further additions include eco-friendly initiatives, like the town’s affordable Pedal Share $4-per-hour bike rental program with four dock locations, 350 acres approved for solar power, and another 200 acres pending.

The town’s rapid redevelopment seamlessly blends its historic past with its state-of-the-art future. One side of town has one of the nation’s oldest opera houses, Vail-Leavitt Music Hall, while the other side has the U.S.’s first 3D-printed concrete house built by SQ4D Inc. Riverhead was also one of the first towns in Long Island to have wineries established in the 1980s, many of which are located on the North Fork and still going strong. “They are flourishing, and the agritourism that comes as a result of that is just phenomenal,” says Thomas. Aguiar agrees, noting, “The town is going through its renaissance, something we have not seen here in 30 years. We’re doing things that other towns haven’t done.”

What: A diverse, seaside community in its renaissance

Welcome to the world of Clear River Environmental. We are proud of our Long Island heritage and are a proud Woman-Owned Business Enterprise! During the past 5 years, Clear River Environmental has provided highly regarded residential and commercial services such as: cesspool pumping, cesspool installation & repair work, chemical treatments, aeration and cleaning, septic tank installation & repairs & more.

Our team of expert environmental consultants, understand that water quality, and reliable & effective operation of septic systems are main priorities for our clients. We are dependable, we can address many clogs which cause headaches for our customers within a very short period of time, ensuring that you, our customer, can remain focused on what is important to you during your busy day.

With locations in Ronkonkoma and Riverhead – we know Long Island, and we know what our clients need! We will work with you to develop solutions which are sustainable, practical, and most importantly – affordable. Customers today are choosing Clear River Environmental for our expertise, approach, and recognition that we are partners together for a cleaner environment through properly working septic systems!