Fresh catches from the Labrador Sea

Torngat Fish Producers Co-operative Society Ltd. was first registered as a co-operative in 1980 and has been operating in the territory known as Nunatsiavut in northern Labrador since 1981. Its reason for being is that in 1979, the former Minister of Fisheries, the Honourable Romeo LeBlanc, set aside three offshore northern shrimp licences for Labrador. Torngat Fish Producers Cooperative was issued the one offshore northern shrimp licence for Northern Labrador/Nunatsiavut. Torngat Fish Producers Co-operative Society Ltd. is a registered Aboriginal business, owned by more than 500 Inuit members, and headquartered in Happy Valley-Goose Bay. The Co-op exports a variety of fish throughout the world, including: Greenland halibut; wild Arctic char; brine frozen snow crab, and Icelandic scallops.

The focus of Torngat Fish Co-op is to produce and sell high-quality seafood products and serve the diverse needs of its customers. As a government regulated, aboriginal cooperative which includes fish harvesters as well as plant workers in Makkovik and Nain, the Coop is managed by a board of directors and staff consisting of majority Inuit members. The Co-op is an integral part of a proud cultural legacy in the Labrador fishing industry. There is nothing easy about it. The challenges and hard work are endless, and often daunting, but it’s all part of life, as they know it. Business View Magazine recently spoke with Torngat Fish Co-op General Manager, Keith Watts, and Assistant Manager, Ron Johnson, about this remarkable enterprise. The following is an edited transcript of that conversation. 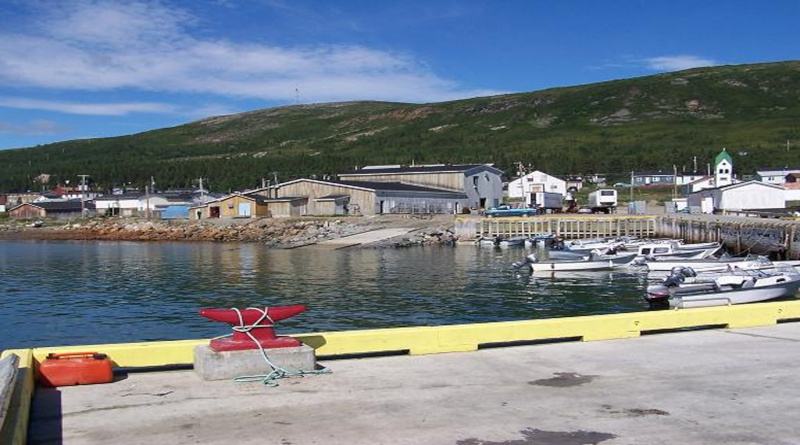 BVM: Can you describe the current operations of the co-op?

Johnson: “We started in one community, Rigolet, Labrador for processing on land, and over time, we expanded our onshore operations. Today, in Nain, we continue to process Arctic char, with the intent to again process Icelandic scallops, because we had a stoppage. The char is a cultural fish for the Inuit of Labrador; that is the main purpose we continue to buy and process into various forms, whether it’s head-on gutted fish, fresh fillets, or smoked Arctic char. We process Greenland halibut, or turbot, in the provincial-leased facility in Makkovik. We also process snow crab in our own facility, a separate building that’s linked with the leased facility for cold storage and blast freezing capacity.”

Watts: “Originally, the co-op was set up for fish plant workers and fisher people throughout Torngat Mountains electoral district, the most northerly provincial electoral district in Newfoundland and Labrador. Each individual is a member of the co-operative and contributes towards share capital, as they provide monies to the co-op through their pay check or fish landings. They have an ownership in the co-op as a member and, through their equity they put in, along with their initial application payment. So, the minimum share would be $500.”

Johnson: “As it relates to the sale of finished products, Arctic char is sold locally in the community in Nunatsiavut and throughout the province. Most of the products come to our head office here in Happy Valley-Goose Bay. We sell through this as a storefront and we also ship across the province. Mostly due to the logistics of transportation, it’s usually flown from here to various parts on the island. For snow crab, we sell to the U.S. in various product sizing – whether it’s an innovative 10-lb. pack that we created, or the normal 30-lb. master. We use a broker to handle that. We’re a smaller organization, so using a broker makes sense for us to access other purchasers of snow crab, increase our margins, and get a higher price. Some of the Greenland halibut we process is sold in the U.S. and Canada, but depending on the year, most of it can be shipped overseas to China or Japan.”

BVM: What are the biggest challenges?

Watts: “In our area, we have no road access to bring people in and very few accommodations where our plants are. We’ve seen a decline in workforce due to aging for 15 years now. It’s just becoming a reality in southern Labrador and Newfoundland, but we’ve always had to deal with this and it’s very difficult. We’re highly mechanized now; we’ve put a lot of money into high-tech equipment that reduces labor. We used to run the crab plant in Makkovik at a maximum of 60 people per shift. We’ve managed to knock that down to 30 with the introduction of very efficient equipment. It takes away from the more laborious tasks, as well.

“Transportation is an ongoing concern. We are only accessible by sea. And the provincial government is responsible for the ferry service; in effect, that’s our TransCanada highway, but it’s not great. They’ve just announced a 15-year contract – a new vessel with a quicker turnaround operating out of Goose Bay, rather than Lewisporte, so, a quicker turnaround for our product. We hope it’s going to be an improvement. We’re working closely with the service provider – Woodward Group of Companies – and the provincial government to ensure this works. Having said that, we are in the final stages of designing and awarding work to build a cold storage and dry storage facility in Goose Bay, so we will sell our product F.O.B. at Goose Bay instead of Lewisporte.”

Johnson: “Other stumbling blocks are the declining resource that varies depending on the species; a shortage of fishers with vessels and licenses; and politics of the fishery. Aldo, how resources are allocated to different individuals; trying to deal with the powerful FFAW (Fish, Food, and Allied Workers) that controls all the fishermen in this province, except for our area – we’re exempt. And how licenses are allocated to an area that’s been left behind due to the collapse of the cod fishery here in the early 1980s.” 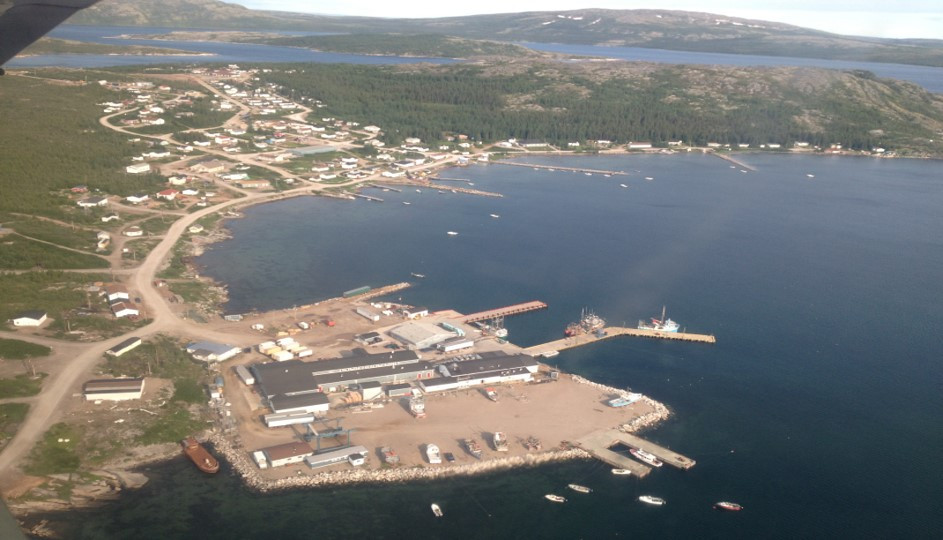 BVM: Do you have valuable partnerships that are vital to the co-op’s success?

Watts: “We are close partners with the Nunatsiavut government. They support us in different aspects of the fishery, and we continue to work with them to advance. A major industry player in offshore shrimp is Mersey Seafoods out of Nova Scotia. We’ve been a trusted partner with them for the last 28 years. They have two factory freezer shrimp trawlers and that pretty much guarantees that our quotas will be harvested, and we rely heavily on our quotas for revenue to operate our fish plants. They are also a very community minded private company.”

Johnson: “Our 10 board of directors are elected officials that change from time to time. They have faith in the management to run the business with board oversight – not on a day-to-day basis. We see them as very important and the biggest partnership we have.”

BVM: Looking to the future, what are the key goals?

Watts: “We intend to grow this co-op and to look at new species for quotas. We are going into the cold storage business, and we have to ensure it works for our business and for other businesses in the area, in order to pay for itself. I would like to think we can sustain the co-op with the present structure and grow as much as possible and advance technologically throughout our different plants; to be able to make the right moves with the direction we’re going, in regard to expansion in the fishery.”

Johnson: “We need to diversify our fishery to the resources that are available now. One of the big things for us is to have the ability to process the species we do have. There are less people available to work in the industry because of other opportunities, but it’s still the backbone of the community to have a fish plant that employs as many people as are available. We don’t want to get stagnant, and that’s why were investing in new equipment and technology to keep a full complement of workers and attract new ones. Having the ability to take on new species, should the opportunity arise, is something we’re looking to do as we move forward.”

Watts: “Sustainability is very important to us. We have and will continue to advocate for at least an acceptable level of science from different levels of governments. We are now running fisheries where we’re concerned about stocks because of a lack of science. We only have indicators from our fishers and our plants to tell us the status of our stocks. So, we need the Department of Fisheries and Oceans to step up to the plate, fulfill their science responsibilities, to ensure our fisheries are sustainable in the long term. We are Marine Stewardship Certified with offshore shrimp and snow crab. That provides many benefits: one being sustainability, the other is market access to Europe.”

Johnson: “A prime example of resource stewardship is our actions with arctic char and snow crab.  For arctic char we have limited our purchases over the last decade to ensure this resource is available for the long-term for both Commercial and residential fisheries.  With snow crab we have limited the allowed quota to harvesters to make sure this resource remains.  By limiting purchases, we’ve taken earnings off our table just to ensure the longevity of these species.

“One final note from the Torngat Fish Producers Co-operative Society: Our fish market is a hit with locals, restauranteurs, as well as those just travelling through town. So, if you’re in the area of Happy Valley–Goose Bay, we invite you to stop by and check out our delicious seafood selection!”