Located in Williamson County, Texas, the resilient City of Taylor has roots dating back to 1876, when the Texas Land Company began auctioning land in preparation for the arrival of a railroad. The community was originally named Taylorville, after railroad official Edward Moses Taylor, but was officially shortened to Taylor in 1892. European immigrants were first to establish the town, which was a bustling shipping center for cattle, grain, and cotton. The community has a long history of hardship and recovery, including a fire in 1879 which destroyed 29 of Taylor’s 32 businesses, resulting in a rebuilding of a stronger, more substantial business district.

By the early 1900s, the town was home to the first savings and loan company in Texas, along with two banks. An annual county fair, a large volunteer fire department, a cotton compress, and an electric company were also notable contributors to the growth of the community. Now a city with a population close to 20,000, Taylor still maintains its quintessential small-town feel. 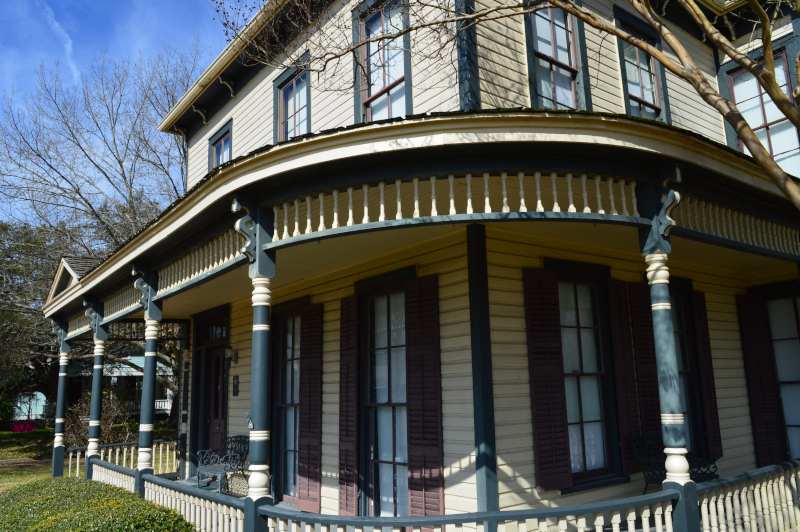 In the 1950s, residents of Taylor resisted the idea of the construction of an interstate highway system (I-35) through the city, supporting a move further west. This turned out to be a setback for the community, as Tom Yantis, Assistant City Manager, explains, “Taylor kind of became stuck in amber for about 50 years, where not a lot happened. It had some down times during that period where the growth had stopped, and a lot of the activity moved west in the county.” As it has throughout its history, the city is now coming back strong. With the Austin Metro area growing, Taylor is becoming more attractive to people looking for a smaller established community. Historic homes and commercial buildings, walkable neighbourhoods, and grand old trees, are just some of what the city has to offer. “Now it’s just about rediscovering and revitalizing that existing fabric,” Yantis shares.

For 20 years, Taylor has been part of Main Street, a national program working to revitalize downtowns across the U.S. Once a thriving hub of the city, Taylor’s downtown is experiencing a rejuvenation. “There’s been an ongoing effort to see our downtown come back to its former glory,” says Yantis. “It was a bustling downtown in the early part of the 20th century. We have these beautiful old buildings and many of them are underutilized right now. The city has really been focusing on trying to work with property owners to bring those buildings back into productive use.”

One example is the McCrory Timmerman building, a 33,000 square foot project on the corner of Main and 2nd streets. The restoration of the original 128-year-old building introduced new opportunities for retail space, spacious loft apartments, gallery and studio spaces, and office suites in the city core. The city participated in that project via tax increment financing through its economic development organization – granting funds to help some of the anchor tenants get started in that building. Including the anchor on the corner, which is the Texas Beer Company, a small microbrewery that is based in Taylor. The McCrory Timmerman project was a keystone for the downtown revitalization program.

Another recently completed project, the 2nd and Main Lofts are also contributing to the city’s downtown reinvention. Doug Moss, who grew up in Taylor and is now a highly successful architect, wanted to reinvest in his hometown. The result is a group of 12 unique lofts, each completely different, and all embracing the style and character of the old buildings. Yantis recounts, “After he finished the renovations, he leased every single space within the first six months. It’s been a great success story. I think people are seeing that there is a market in downtown Taylor. People want to be there and are interested in the work that’s being done to revitalize downtown.”

Arsenal Marketing, the firm hired to promote the city and attract visitors, has been successful in drawing attention to the community with branding and a slogan, “Visit Taylor Made”. Through a website and social media, visitors are enticed by the shopping, eating establishments, and rich history of the city. One definite draw for tourists is the food, including Louie Mueller Barbeque, a Taylor original since 1949. Stacey Osborne, Marketing Communications Strategist for the city describes, “Barbecue is like a religion in Texas. There’s a magazine called Texas Monthly and they do an annual barbecue edition. They have a trail in it where they list the top barbecues in the state, and all four of our big barbecue joints have made it onto that list. That’s a huge point of pride here. People come to Taylor just to try that barbecue.”

Visitors or residents with an interest in Texas history can visit the childhood home of Dan Moody, now a museum owned by the city. As the youngest governor in Texas, Moody is famous for being the first to successfully prosecute the Ku Klux Klan in 1924. Yantis boasts, “We are so proud to be his hometown, We have people that come to visit Taylor just to learn more about Dan Moody – he was a great man.” An Amtrak stop in downtown Taylor offers a convenient way for tourists to plan a day trip to enjoy the unique experiences the city has to offer. 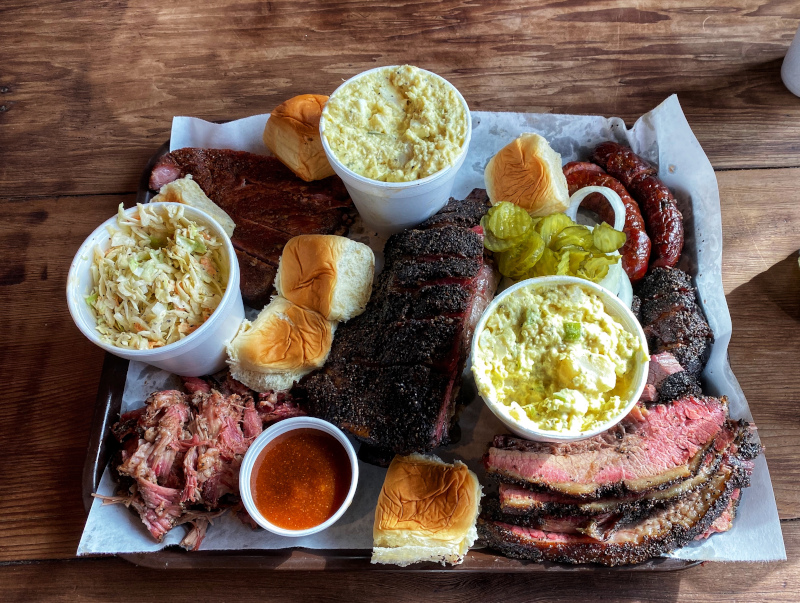 With a robust trail and park system, residents of Taylor can walk, hike, or bike throughout the connected paths that run through the city. Taylor Regional Park, a baseball and softball complex, is host to many local and out of town tournaments. “It’s a big draw for people to our town,” says Yantis. “Right next to the park is the Williamson County Expo Center, where they host livestock shows, rodeos, and other expo type events in that facility. Both are really first class. In addition, the City of Taylor was excited to partner with Skyler Design Build on the construction of the new Dickey-Givens Community Center. This is an important project for the community and Skyler has been a key to the success of the project.”

As the community continues to grow, so does the need for housing. Located just 25 miles from downtown Austin, there is an influx of commuters looking for accommodation in Taylor, creating an increase in residential housing development. According to Yantis, “We have about 900 residential units that are in the planning phase right now. This past year, we have issued about 180 single family residential permits, and we see that continuing to increase over the next several years; I don’t see it really slowing down anytime soon.” A comprehensive planning project under the name “Envision Taylor” is also underway, with some focus on optimizing development in the city’s interior, while making use of, and maintaining, existing infrastructure.

The Electric Reliability Council of Texas is Taylor’s largest employer, providing more than 740 workforce positions in the city. Known as ERCOT, this non-profit corporation manages the flow of electric power to more than 26 million Texas customers through their headquarters in Taylor. The local school district, city government, and healthcare also make up a significant portion of the city’s employers, along with several mid -sized industrial businesses, each employing between 15 and 50 employees.

Supporting small businesses during COVID-19 was a priority of the city. One strategy included working with the Chamber of Commerce to create funding for those with reduced income opportunities during shutdowns. This plan was successful in keeping many smaller retail and food and drink establishments from major impact. “We were really preparing for the worst in terms of our revenue streams,” says Yantis. “But our sales tax revenues actually went up during COVID. We think some of that has to do with the fact that more people were staying home, therefore, they were spending their tax dollars in Taylor. If they were going outside of the city to work, they may have been spending their lunchtime tax dollars in another community. Overall, I think we’ve been blessed during the pandemic not to have seen a significant economic impact locally. That’s not to say that there haven’t been certain businesses that have been negatively impacted, but by and large the overall economy of the town has weathered it pretty well.”

With continued growth on the horizon, the city is focused on protecting the character and quality of life that make Taylor a desirable place to call home. Yantis shares, “We want to maintain the qualities that have made Taylor a great place to live. That includes our walkable neighborhoods and the ability to get around town without having to have an automobile – destinations like our downtown that bring the community together, and our parks and trails.” With its beautiful neighborhoods and welcoming attitude, Taylor maintains a connection to the past with an eye to the present and great plans for the future.

“When you surround yourself with the best, you rise to their level.” That philosophy is a key tenet at Skyler Design Build, LLC (Skyler). Skyler’s team prides itself on doing the best work for clients by having the best, most experienced and innovative team on each and every project.

Skyler is a nationwide full service general contracting and project management firm. Our goal is to save money and time without the sacrifice of quality. When planning your next commercial, healthcare, or institutional project, the Skyler team is here to help from a full design build to a simple building refresh. We offer creative solutions from conception to completion within your budget and schedule.

Skyler’s experience, attention to detail, and streamlined management process put us miles ahead of the competition, as we constantly seeks ways to save money and time without sacrificing project quality. Recently, Skyler Design Build was pleased to partner with the City of Taylor, Texas on the construction of the beautiful new Dickey-Givens Community Center (Center). The Center is an important asset to the community, and we are proud to have played a key role in making the City of Taylor’s concept a reality for the citizens of Taylor.