A leader in the home improvement services industry

Business View Magazine profiles Tailored Living, a leader in the home improvement services industry with over 175 locations across North America.

The company now known as Tailored Living has an intricate history. Its progenitor, Budget Blinds, was founded in 1992 when five young friends and entrepreneurs with a passion for building a unique niche in the home furnishings industry, founded the window coverings company in Orange County, California. In 1994, Budget Blinds began franchising in the U.S., and in 2005, it began franchise operations in Canada. In 2006, the partners formed Home Franchise Concepts (HFC) to operate multiple home improvement brands, one of which was Closet Tailors.

Dan Tafoya, the current President of Tailored Living, says that Closet Tailors experienced healthy growth, even in its earliest days. “Ninety-three percent of what we sold was closets and we thought we’d live happily ever after,” he admits. “But a couple of things happened that changed the landscape of our industry. One was the Recession. But even more than the Recession was the fact that while the awareness of consumers for our industry was at an all-time high, the products they were looking at were a lot more than closets. We were getting requests for a lot of products that we didn’t have in our catalogue. We were getting a lot of garage requests; we were getting a lot of requests for home offices. So, after the Recession, our industry didn’t go away – it just came back different.”

Around that time, Tafoya remembers reading an article entitled: The Home Organization Industry is Evolving from its Roots in Closet Design. “It talked about how more and more people were looking to organize their life and not just their closet. It got us thinking when we realized that we were headed down the path of being just another ‘me-too’ company. And that’s not what we wanted to do,” he explains. Tafoya and his colleagues began to realize that continuing the company as just one of the many closet companies around would not be a winning strategy. “So we came up with the brand, Tailored Living, and at about that time, we bumped into the CEO of Premiere Garage. This is around 2010.”

Within a year, Tailored Living had acquired Premiere Garage, and re-branded as a new company. “Premiere Garage was getting the same requests we were after the Recession,” says Tafoya. “A hundred percent of their sales were in the garage and they were getting requests to go in the home. We had the opposite; we were in the home and getting requests to go in the garage. So, we brought these two companies together and created a new company that was stronger than either one of the two companies would have been if they had tried doing it on their own. We coined the phrase: ‘Whole Home Organization,’ and that’s where we’re at, today. We are the largest whole home and garage flooring franchise in North America.” Tailored Living featuring Premiere Garage now has 98 franchisees in 156 territories in the U.S. and another 37 in Canada.

Key to Tailored Living’s modus operandi is its proprietary, 3D software that allows its franchisees to tailor individual designs for its customers’ garages, entryways, mudrooms, closets, pantries, family rooms, and home offices. “You won’t find any two designs from Tailored Living exactly alike,” Tafoya exults. “They’re always different because we’re going to tailor that design to fit their needs. And our franchisees do a great job of cross promoting all products. So if they’re in there talking to them about the garage, before they leave, they make sure they know that we also sell products for the home.”

All Tailored Living franchisees have their own box truck – racked and professionally logoed. Some have storefronts and most have between 2,000 and 2,500 square feet of warehouse space. When an order comes in, product is delivered to the franchisee from one of the company’s national manufacturing partners. “When they order product, it’s delivered to their warehouse,” says Tafoya. “There’s not a lot of inventory because the product, for the most part, is ordered by the job. So when it’s delivered it’s side marked with the owner’s name.”

One of Tailored Living’s important partners is Sika, a multi-billion dollar Swiss company. “Sika is one of the leaders in commercial flooring,” Tafoya says. “We have an exclusive relationship; we are the only company in our space that Sika is allowing to put their commercial products down in the garage. And that’s what makes us different. Most of our competitors don’t offer epoxy floors.” Sika reps also help train Tailored Living franchisees in epoxy flooring fundamentals. “Sika comes out about every other month and conducts training at our location, here in Orange, but will also go in the field as needed and either help our franchisees or provide product for us during our training programs.”

Training its franchisees is a key element of Tailored Living’s business model. All new franchisees go through an initial training regimen of 11 days at company headquarters, and then are carefully monitored and supported for the next 12 months. There are videos for remote training (“So we don’t have to have franchisees flying in here all the time”), three ongoing webinars, and focus-group leaders throughout the company’s five North American regions who take on key projects.

“We have 12 mentors,” adds Tafoya. “Most of them are doing a million dollars in sales or more. They all have been in the field for four or five years plus; they’re all very successful. After new franchisees leave the 11 days of training, the mentors go out to their locations within 45 days. It helps reduce the learning curve for new franchisees because we ask them to spend three days there; they go out on sales calls, for cabinetry and flooring; they do installations with them; and the last day is all operations. It gives a new franchisee confidence and extra support.”

When searching for those new franchisees, Tafoya says that the company looks for individuals who will fit in with the company’s culture and accept and maintain its four core values: trust, engagement, collaboration, and transparency. “We like people who have run a small business,” he adds. “They’ve had to hire, train, motivate, and retain employees. And it’s always good if they have a little bit of sales in their background. We want to find somebody that will trust the model. Don’t try to recreate the wheel – the process, the technology, the support is there. And also, they’ve got to believe that we’re stronger as a team than they would be as an individual. Teamwork is a big, big word that we use all the time. We believe in it. We want them to be engaged in the business as an active participant; to go to the regional meetings; to go to our conventions; to want to be a focus-group leader; and to, someday, be inspired enough to want to be a mentor. And we want transparency – open and honest communication.”

According to Tafoya, Tailored Living has experienced double –digit growth over the past three years, and he would like to see the company add 30-35 new territories this coming fiscal year, with a target of 450-500 new territories over the next five years, as well. He believes that Trilantic Capital Partners, which acquired Home Franchise Concepts in December 2015, wants to make sure that all HFC’s brands – Tailored Living, Budget Blinds, and Concrete Craft – are leaders in their space, and is investing heavily in the company’s operations to reach that goal.

Tailored Living’s industry experience, commitment to service, and wide breath of product offerings has allowed it to grow into the continent’s largest whole-home organization company, serving more than 2,000 cities throughout the United States and Canada. And, according to Dan Tafoya, the best is yet to come.

Check out this handpicked feature on Larsen Development – The beauty of expertise.

WHAT: A leader in the home improvement services industry with over 175 locations across North America

WHERE: : Headquarters in Orange, California

Mission Woodworking – Mission Woodworking was founded by Kevin and Pat Beck in Bristol, Indiana in 1998. Its products include: Living Room Furniture, Bookcases, Bedroom Furniture, Office Furniture, Garage Furniture, and matching Baseboard Covers. Each piece is constructed of Indiana cherry or red oak veneers and solids, and is available in a variety of beautiful natural wood, stained wood, or painted finishes, all in the timeless Mission Style. – www.missionwoodworking.com 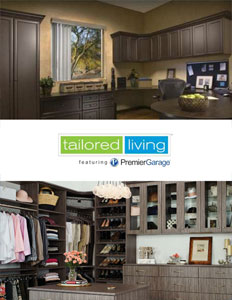