MY Shower Door & D3 Glass – All in the family

All in the family

At one time, Bill Daubmann was a professional hockey referee with a background in electrical technology. His wife, Donna, worked in a beauty salon. When their ten-year-old son, Keith, became ill, they decided they needed to find a business that would allow Bill to stay off the road, and Donna to stay at home to care for Keith and his younger brother, Douglas. So, they started a closet organizing company out of their home in Springfield, Massachusetts.

“We were one of the first people ever to do that ClosetMaid wire shelving,” Daubmann recounts. “The shower door business came to us by accident; builders that were impressed at how well we were doing closet organizing, asked us to do shower doors because they couldn’t find anybody that was capable of keeping up with the work and who had a strong work ethic. I had that business for 15 years and sold it in 2002 and moved to Florida. We decided to reopen; only doing shower doors and not any closet shelving.” 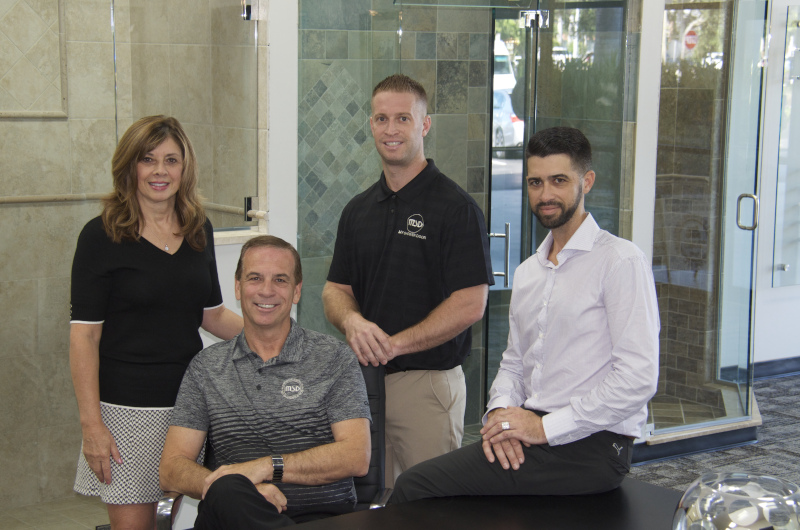 The Daubmann family opened their first frameless shower door showroom in Naples in September, 2003. Today, there are seven MY Shower Door locations in southwest and central Florida: two in Naples, and one in Ft. Myers, Sarasota, Tampa, St. Petersburg, and Orlando. “These stores continue to grow because we are finding that when people are making decisions about frameless shower doors, which is not an inexpensive investment, they like to come in and touch the products as opposed to ordering something online, receiving it, and finding out it wasn’t exactly what they wanted,” Daubmann explains.

“So, by setting up the showrooms, people can not only come in with photos of their existing shower, we can help designers, and even architects, do some value engineering planning,” he continues. “Many times, the type of glass is just as important as the configuration of the shower – from functionality, ease of access, being able to turn the water on before you enter, the availability of a towel upon exiting – all of these things are taken into consideration when doing layout, including considerations for the glass’ strength, durability, clarity, and privacy.”

During the company’s first decade in business, it was purchasing glass from out of state. “The best that we could find that would suit our purposes was in Tuscaloosa, Alabama,” Daubmann notes. “But to have a truck come into Naples once a week, with the volume of glass that we were selling, just didn’t make sense for our builders and contractors. So, my son, Douglas, decided to do the valuation of what it would cost for us to grow our business vertically and invest in machinery where we could make tempered glass ourselves. And that started in 2013. We formed a company called D3 Glass – “D” is for our last name, Daubmann, and it was the three of us – Keith, Doug, and myself. So, D3 Glass is now the manufacturing arm for all of the MY Shower Door stores.

“In order to fill our capacity, we were also selling to other glass shops in the area that were in the same position we were in; that they had to purchase out-of-state or from vendors far away. So, even though they were competitors, if they were in the position to win the job from the customer, they still had to order glass, and we tried to position ourself so that we could also be a glass supplier. So, D3 Glass has grown, as well, from 2013 to now. Just recently, we moved into a brand new, state-of-the-art manufacturing/distribution facility that’s now the North American headquarters for MY Shower Door stores and D3 Glass; we’re all in the same building. It’s a 60,000-sq.-ft. office, distribution, and manufacturing facility located in south Ft. Myers. And we have been noticed and ranked locally, regionally, and nationally. Recently, we made the Inc. 5000 Fastest Growing Businesses in the U.S. for the 4th time; we were on their list in 2015, ’16, and ’17. We did not make the list in ’18, but appeared back on their list in 2019.”

Daubmann believes that MY Shower Door has several competitive advantages in the shower door industry. “Number one: our hardware that holds the glass – the hinges – are like no others and are not available to the other glass shops in the area,” he begins. “It’s a different style of hinge and a more durable, heavy-duty hinge. If you’re going to use a heavy glass shower door, you have to have a good hinging system to hold the weight. So, that’s a huge advantage and we don’t sell those to our competitors.

“The second is that we have grown vertically and we can make our own glass. So, if push comes to shove, and we have to get a job done for somebody in a short period of time, we can do it. We can turn a piece of glass around very quickly, where, before we were doing our own manufacturing and I was ordering out-of-state, I had to wait till the next week to get a panel of glass.

“The third thing is a coating that I personally worked with a manufacturer to make – a coating on the glass that keeps the glass looking good and clean. It’s a process called covalent bonding that seals the pores of the glass and does not allow minerals to embed themselves in the glass, and that also has a hydrophobic quality to repel water. And that coating is not available to any other glass supplier in the area.

“Additionally, we’ve got 16 installation crews, we’ve got our own vehicles, and all of our 105 employees are actual employees – they’re not subcontractors. So, we have control over the product, the process, and the people. And anybody in business knows that those are the three ‘Ps’ that almost all businesses run on – product, process, and people.”

As the company’s manufacturing arm has continued to grow, Daubmann reports that it is getting more and more inquiries from the hospitality industry. “We’ve grown to the point where we can handle major jobs – jobs such as a Marriott Hotel,” he claims. “We just did the Buena Vista Suites in Orlando because we have the manpower and the manufacturing capabilities to handle projects like that. Normally, those jobs go to a commercial glazier, because most small glass shops cannot handle massive projects. But we’ve grown to the point where we can. And the fact that we make our own glass makes it even more enticing for hotels to use us. The most important thing for a hotel is to rent their room, and if you have it down and out of service while you’re waiting for glass to come in, you’re losing money.”

The MY Shower Door company has also brought on a new product line. “We opened up an architectural division,” Daubmann states. “Because we can make glass, and we have the machinery to make large panels of glass, we are also doing office partitions. We did the Hertz corporate building here in Estero – that’s their global headquarters. All of the interior office walls are made of glass that we made out of our D3 plant. We just finished work for a Florida weekly newspaper; they moved into a new building and wanted that open atmosphere. A lot of the Florida buildings are going where they want more natural light coming into offices. So, you’re not seeing as much sheetrock walls; you’re seeing more glass walls. And that’s going to give us a lot more work. Additionally, our architectural division also does glass railing systems and wine closets. Glass railing systems have become very, very popular, as well. If you’re walking through a mall or an airport that’s multi-level, you’ll see glass railings all the way through the atrium. That’s become a popular thing for architects to design, and that puts us in another category to bid on.” 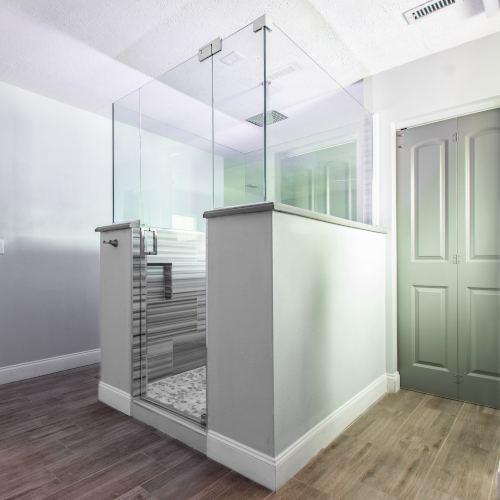 As is the case with many manufacturing firms, lately, Daubmann admits that finding skilled craftsmen has been a challenge since day one. “We’re fortunate, though, that I, and both my sons, know the business inside and out and we can train people,” he avers. “So, we’re finding people who have good attitudes and a good work ethic and we’ll train them. And if they do come to us with a set of skills that fit a particular project, it’s up to us to get them into the right slot so that they can perform well for themselves and the company. We look for skills that we need. For instance, we have a CNC machine and a water jet that does take computer knowledge in programming and operating. So, we look into other industries that use similar machines, whether it’s the granite and stone industry or the sheet metal industry and, hopefully, we have a company culture where people want to come and work for us when we advertise for help. We try and grow organically by having a culture that gives people the tools to succeed. We’ll manage it; we’ll oversee it; but we find that people have to have the room to grow and bring things to the table.”

MY Shower Door’s company culture also extends itself outward toward the greater community. Daubmann says that the firm sponsors many local school programs and, as a member of the Economic Development Council for South Lee County, Florida, he reveals that he is launching an initiative he calls Work Signing Day. “I’d like to take credit for inventing it, but it’s not mine,” he remarks.  “I saw it in a newspaper that it was done in another part of the country and it was very successful. You know how students have a signing day if they’re going to play football for a university? On a certain day all these student athletes who get scholarships go down to the gymnasium and the school celebrates the fact that they’re going off to these schools. So, we’re going to do a similar thing for students who are going directly into the workforce. We’re going to get the future employer involved, and the parents, and we’re going to celebrate these students that are deciding not to go into college for whatever reason. And their future employers will be there to celebrate along with them. And this will be done as part of our Economic Development Council, where our vision is to help local businesses sustain themselves and grow organically.”

In conclusion, Daubmann stresses that MY Shower Door and D3 Glass are family businesses, and that ever since Bill and Donna decided that they needed to take care of their family first, back when Keith became ill, all business decisions which have helped make the firms so successful, have been made as a family. “We’ve stayed tight and made all the decisions together,” he declares. “We don’t always agree, but we always work it out. We’ve done it since we started.”

WHO: MY Shower Door & D3 Glass

WHAT: A manufacturer of frameless shower doors