Region of Queens Municipality, Nova Scotia – On the rebound

Along the scenic south shore of Nova Scotia, sits the Region of Queens Municipality, a community of just over 10,300 residents that came about as the result of amalgamation in 1996 of the Town of Liverpool and the Municipality of Queens. It encompasses the entire County of Queens. Highway #103 passes through Queens County, midway between Halifax and Yarmouth. Route #8 Highway connects Liverpool to Annapolis with Liverpool being 1 ½ hours from Halifax. Founded in 1759, Liverpool is one of the oldest areas in the province. In fact, historic architecture, unparalleled beauty, and rich natural resources are found throughout the Region of Queens, making it a must-go destination for tourists and a delightful community in which to work, play, and call home.

Thanks to a forward-thinking municipal government, Queens Municipality continues the legacy of caring for the community from an operations perspective, while a diverse roster of thriving businesses and promotion of new opportunities and available sites, drives economic development. The area was blessed with electricity early, around the end of the 1800s. A major employer, Bowater Mersey Paper Company, started in 1929, during the Depression, and resulted in several hydro dams being built around the local Mersey River – the largest river in Nova Scotia. Presently, there are six hydro dams on that system, controlling water levels, eliminating flooding, and generating green energy. Nova Scotia Power is the beneficiary and owner of those facilities. Plans are on tap to renew all the plants in the next 10 years. The project, estimated at $600 million, is expected to go before the Utility Review Board next year for approval. 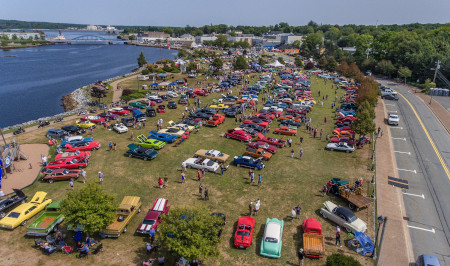 According to Mayor David Dagley, “The Bowater effort increased economic prosperity at a time when every other community in the area was suffering. It also brought infrastructure to Queens Municipality from 1895 until 1930. Today, those 120-year-old water pipes are still in use and need to be replaced. We spend two to three million dollars every year on new infrastructure and upgrades to existing infrastructure, principally, water and sewer, along with street paving, renewal, and maintenance.”

When the Bowater Mersey Paper Company closed in 2012, after merging with Abitibi and moving to Quebec, it had a huge impact on the Region of Queens Municipality as well as all of southwest Nova Scotia. Many employees found work elsewhere and relocated. Some found local jobs and ever-resourceful Queens has been on the rebound. The province purchased the 550,000 acres of woodland owned by Bowater Mersey, and has put it back into production. All the harvesters previously employed by Bowater are still working. The province also owns the Bowater site, where it has demolished buildings that were no longer usable, to decrease their assessment footprint.

Several businesses have come to that location through Nova Scotia Lands, Nova Scotia Business Incorporated, or Innova Corp, which are all provincial start-up efforts. One of the onsite employers, R. J. MacIsaac, was successful in acquiring tenders for recycling three naval vessels. And they’ve recycled the Farley Mowatt, a smaller vessel that was anchored in Shelburne Harbour. Mersey Seafoods, a scallop and shrimp fishing company on the harbor in Liverpool, is in the process of building what it claims will be the most modern scallop processing plant in North America. It’s now under construction at the company’s existing site and it’ll be renovating other buildings on the property once that is completed. At present, it employs 150 people.

Aqualitas, a Canadian Licensed Producer of cannabis has set up shop at the Port Mersey site in a 70,000-sq.-ft. building where it is growing marijuana for medical purposes; it will also include recreational cannabis when that becomes legally available in Canada on Oct. 17. Mayor Dagley reports, “They are an aggressive company, they’re increasing their employment footprint, and will be a successful story as we move forward in Queens because of the new jobs. We also have a sawmill and exporter, Freeman Lumber, in Greenfield, that employs about 150 people. White Point Beach Resort operates year round and is approaching 200 employees. We have a local call center that employees 75 people and many other smaller employers that are just as important. And about 100 employees work for the Region of Queens Municipality, in addition to seasonal work crews.”

Real estate is booming in the Region of Queens Municipality. A testament to the fact that the population is growing, almost double the transfer tax has been collected this year on home sales than was taken in three years ago. Contractors, carpenters, plumbers, and electricians are working flat out on renovations to newly-purchased homes. In fact, there is a six to eight month wait for a carpenter and more carpenters are moving to the area to seize the opportunity. The Region has also taken stock of the lands it owns as a municipal government. It’s listed and sold some surplus properties and done some RFPs, internally, to the public. Plaza Retail REIT purchased two acres of land at Queens Place and erected a 13,000-sq.-ft. building that is operating as a Dollarama.

“That’s important,” says Dagley, “because the adjacent municipality of Shelburne doesn’t have one, so that business will draw a lot of shoppers to Queens Municipality. We have also looked at vacant schools that have been turned back to the Region from the province. We transferred one in Mill Village for a dollar to DEVI International Boarding School. They’re bringing international students in and it’s providing employment for six teachers.” Another school was sold to a developer who intends to build apartments on the property. And on a larger, 32-acre property sold last year, the developer has foundations in place for apartment buildings. Kent Fields Estates have said they will build more apartments as those are rented. Given the number of employees coming to work at companies in Queens, those accommodations are much needed. 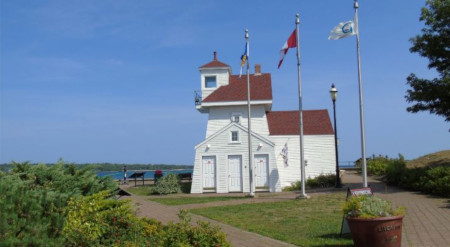 Other amenities and services offered by the municipality include a second generation landfill with source separation of recyclables and a separate organic waste collection. The Liverpool area is served by a state-of-the-art water treatment facility, and a wastewater treatment facility. Caledonia area also has a wastewater treatment facility. The local Queens General Hospital is an acute care community hospital with a 22-bed combined Medical and Surgical Unit, as well as a Day Surgery Unit and an integrated Collaborative Care Centre. The North Queens Medical Centre in Caledonia provides accessible primary care services in North Queens and surrounding areas.

On the recreation front, a bevy of local trails and parks exist in Queens County, and Queens Place Emera Centre boasts a fitness centre, an indoor 2-lane oval track for walking or jogging, an NHL-size arena capable of playing host to a diverse choice of on-ice activities, concerts, trade shows, conventions, and more. On the adjacent property exists a modern skateboard park, bike trail, an outdoor walking trail, and basketball courts. The Mayor shares some exciting news: “We’ve secured the World Junior Curling event for Feb 17-24, 2019 at Queens Place Emera Centre. It’s a major accomplishment that will put Queens and Liverpool on the world map. We’re looking forward to filling all the hotels in the area during that event, which we’re able to host because we have such a huge volunteer base.”

The Region has awarded a contract to Upland Consulting at a cost of $130,000 for a complete overhaul of the Municipal Planning Strategy and Land Use Bylaw. “We’ve had the current strategy in place for nine years,” says Dagley, “and it’s time for a review. We’re looking forward to our staff working with the consultant and it will have a large component of public input. Hopefully, it will address the needs for another nine years, as to where we want to develop and to what extent. We’re working on all our infrastructure in the Region of Queens Municipality and looking to improve the quality of life. We have houses that are selling here, people that are coming here, and jobs that are being filled. We’re looking forward to continuing to grow our population and our economy.”

Check out this handpicked feature on Truro, Nova Scotia – Make the connection.

WHAT: Regional community of 10,300 people

WHERE: Southwest shore of the province of Nova Scotia