Morton Buildings innovates and improves as a post-frame construction leader.

When it comes to street cred, 100-plus years provides a lot.

Morton Buildings has been a family-run entity since its 1903 founding as the Interlocking Fence Company by the Getz family, among the earliest of settlers in Morton, Ill. The initial enterprise emerged as a major supplier to farmers, specializing in woven and barbed wire, posts, braces and gates.

Expansion ultimately moved the company into roofing materials and other home goods, which made its catalog a must-have for Midwest farmers. In fact, it still operates from the same building featured on a catalog cover from the 1920s. Its modern-day wheelhouse of post-frame construction sprang up during World War II, when government imposed limits on how much farmers could spend on construction.

Poles could be used to hold up trusses and framing could be put around it, which provided farmers with the buildings they needed while controlling costs. The company began building operations in corn cribs before making the “pole barn” a major aspect of the operation. Initially, customers would contract to have a Morton-style building from Interlocking Fence Company, before operations ultimately transitioned to focus on construction and hastened the name change to Morton Buildings. 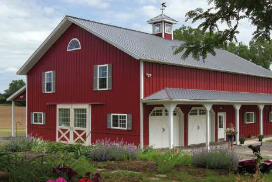 The market has since grown far beyond the early farm infrastructure.

“I think a farmer may have gone to church gathering on a Sunday and heard someone talk about how the church needed a new building, but wasn’t sure how to go about building it or getting the money to build it,” said Dan Nyberg, Morton’s sales analysis and training manager. “He might have considered his own machine shed and said, ‘I could fit 300 people in my shed if we need to,’ and one thing led to the next.”

Morton employs a staff of professional builders, some of whom have been with the business for more than 45 years. Nyberg, who’s approaching 25 years, still refers to himself as a “middler,” while claiming the roster of experience has enabled greater efficiency and quality for a customer base across 36 states.

The more things stay the same, however, the more they change.

“It is much different today,” he said. “The focus in the past was more on a product. You would purchase a building and if it met your expectations, you were happy. Today, people not only want a quality building, but they also want to be able to enjoy the experience of purchasing the building and watching that building go up. There’s a broader expectation of the market. There is a concern, ‘How quick can you get back to me? How fast can you design and configure the building? When is it going to happen and how it is going to happen? What is the crew like?’ People still want a quality building, but they also want an enjoyable experience in buying and watching that construction take place – that’s what we provide.”

Morton has shown signs of recovery since the Great Recession, which it endured in part by enhancing focus on agriculture products, a demand which was less impacted during the darkest downturn days. Demand began increasing across the board by 2012 and 2013, including structures for storage of boats, four-wheelers and airplanes.

“We can be positioned the best in company health when we have a broad range of niches we’re active in,” Nyberg said. “The ag sector has been good and office or warehouse development never totally disappeared, but was running at low level. We’ve seen pick-up in that as well as residential projects, and are much more confident in terms of forward growth than we were a few years ago.”

The post-frame space, in fact, swelled when other building niches were struggling mightily.

“Suddenly, builders were at the table wanting a piece 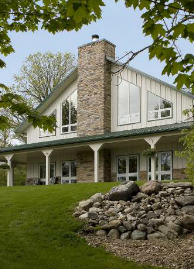 of the business which never existed before,” he said. “People are coming and going all the time, not knowing whether or not they’ll be around isn’t healthy attitude verification on the customer side of things.”

After implanted in the ground or surface-mounted to a foundation, columns support additions in trusses and framing components that include wall girts and roof purlins. As an engineered building system, the modality has cost savings and energy efficiency advantages when compared to traditional building methods, without any lessening of quality or aesthetics.
“We’re one of the best kept secrets in construction,” Nyberg said. “There’s a certain stigma some niches have when people think about building. When we’re talking to a church group, doctor or lawyer looking to build a new office, it’s not uncommon for them to have a miss-held perception. They all want something that looks classy, and they’ll say, ‘We can’t use a pole barn.’ But some do their homework, and we’ve seen a growing percentage of customers coming, not simply drawn by perception of lower costs, but actually understanding the complete package of advantages.

“You don’t have cold spots as compared with stud wall construction, where for every 16 or 24 inches you have a stud that’s basically going to result in a cold spot in the wall.”

In post frame construction, full blankets of insulations can be applied column to column, creating a barrier. The design also enhances the insulation value from wall to wall in ceilings.

AT A GLANCE
WHO: Morton Buildings
WHAT: Post-frame construction company whose products include pole barns, equestrian buildings and steel buildings
WHERE: Corporate headquarters in Morton, Ill.
WEBSITE: www.MortonBuildings.com 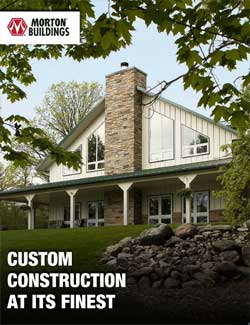