November 2014Past IssuesSupply Chain and Logistics

The Port of Palm Beach is located on Florida’s Atlantic coast, about 80 miles north of Miami and 135 miles south of Port Canaveral. It’s the fourth-busiest container port in the state and the 18th-busiest in the nation and functions largely as an export hub – with approximately 80 percent of its cargo heading outbound, primarily to the island nations of the nearby Caribbean region.

All of the nearly 900,000 tons of raw sugar produced annually for export from Florida’s Glades Area is shipped through the port, which has a mere 162-acre footprint but also moves diesel fuel, liquid asphalt and other bulk commodities and is home to the Bahamas Celebration cruise ship, which departs every other day to the Bahamas and accounts for the arrival of 275,000 passengers each year.

Needless to say, holding the keys to such a significant operation is a hefty full-time job.

But since arriving six years ago – just as the facility began feeling the impact of what’s since been labeled the “Great Recession,” by the way – Manny Almira has never wanted to be anywhere else.

Or… at least not once he got out of his car each day.

“I was coming up here on a daily basis and was traveling 60 miles each way,” he said, referring to a daunting initial commute to and from the Miami suburb of Davie. “My daughter was a junior in high school, and you cannot take a child out of high school, not with all their friends, and relocate her. So I had to wait until she graduated, and she did, finally, thank god. 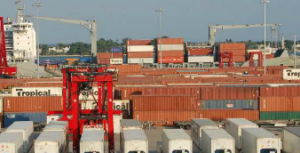 “I had worked at Port Everglades prior to coming to Palm Beach, and things were a lot more stable there. It’s a much bigger port, but I still wanted the challenge of running a port. I managed to get this job, and I’m still as enthusiastic today as I was when I first came in here.”

The recession conveniently greeted him with a tangible slowdown in international business, and instantly prompted his adherence to a management style that warranted cutting spending to the barest of minimums and wringing every last bit of impact out of every dollar that was allocated.

The tension on the expense rope has since been released some, but Almira said that the discoveries made and the efficiencies created in the time of involuntary leanness are continuing to pay off today.

For example, prior to the downturn the port was paying $250,000 annually to have an outside company come in to manage port-related railroad activities. The in-house maintenance crew took over those tasks during the economic slump and still handles them six years later.

“I sat with all staff and basically told them, ‘Look, we’re going to be doing the jobs of two, sometimes three. That’s the only way we’re all going to survive, and we will survive. A rising tide will allow us to up,’” he said. “That is exactly what happened here.”

The port is locked-in in terms of the territory on which it sits, thanks to local agreements with the neighboring cities of Riviera Beach (to the north and west) and West Palm Beach (to the south). There are established housing developments along the west and south port boundaries, while the territorial obstacle to the north is, Almira said, “very well defined.”

Also hindering is the port’s existing dredge depth of 33 feet. Almira said a recently completed Army Corps of Engineers feasibility study would allow for a deepening to 39 feet, which would make the port significantly more attractive and compatible for ships that are perpetually increasing in size.

“The only place we can actually go is east, and that’s in the water. We’re not going to do that,” he said. “So what you hope to do at that point is keep throwing technology at it to make yourself more efficient, and thereby being able to handle additional freight. At the end of the day, it is a huge challenge that we cannot continue to grow.
“The rule of thumb among ports is: If you are not growing, you may be getting smaller. These companies may be looking at other alternatives, and as a result you may be locking yourself into a corner that you don’t want to be in. You want to expand, you want to be able to accommodate larger, deeper ships. At 33 feet today, it’s somewhat of a challenge.”

The port did manage to acquire a 4.5- 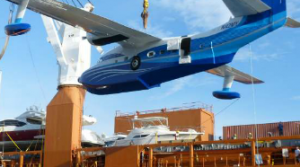 acre parcel of land immediately to its south that had been owned by the Florida Department of Transportation, and another adjacent piece owned by the Florida Power & Light utility company may be available for temporary storage. The dredge issue, Almira said, will necessitate further study work with the Corps of Engineers, and continuing attempts to convince Palm Beach residents of the value of a depth that’s increased even to 36 or 37 feet.

“The profile of ships is going to be changing. You’re going to be getting longer ships and you may be able to get deeper ships,” he said. “The plus side of that is they’ll be able to carry more, so there’ll be a lesser amount of ships coming into the port. The goal is to have more cargo transported, and that’s one way of accomplishing it.”

Elsewhere, Almira said the objectives for the port over the next five years reach in many directions.

A deal is nearly complete for a foreign company to establish daily transport of compressed natural gas to the Bahamas, which will aid in the conversion of an electric plant there. He said there is “great probability” that another cruise line will take up residence, a change that would necessitate construction of a parking garage to accommodate travelers who arrive by car.

A shift in the political climate in Cuba would also be a plus, he said, thanks to the presumed boost it would provide to the port’s incumbent largest tenant – Tropical Shipping.

“Where I would like to see us get more involved in is having Far East investors look at Palm Beach and South Florida, with the possibility of bringing in finished goods or finishing the goods here, manufacturing them,” Almira said. “I always use the example of irons. Why not finish them here and from here go ahead and transfer them to the international markets, as well as to the United States?

“If you look north, we’re looking at about 300 million consumers. Why not utilize the geography to best suit that type of transportation? I have several meetings coming up with investors over the next several weeks, and I’ll definitely be bringing all of that up.”

WHO: Port of Palm Beach
WHAT: The 18th-busiest container port in the United States and a major modal point for the shipment of bulk sugar, molasses, cement, utility fuels, water, produce and break-bulk items.
WHERE: Within the Port of Palm Beach District, an independent special taxing district covering a land area of 971 square miles in Palm Beach County, Fla.
WEBSITE: www.PortofPalmBeach.com 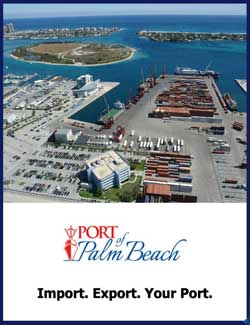