The next tropical destination

The City of Port Lavaca, Texas is a destination just waiting to be recognized. The tropical seaside community of 12,000 is nestled in the middle of Texas’ Gulf Coast boasting soaring views of the ocean, plentiful recreational and entertainment amenities, and a strong source of well-paying jobs. “We are looking forward to other people discovering what we already know,” says Port Lavaca City Manager, Jody Weaver. “We want it to be a destination place.”

Port Lavaca sits atop a bluff overlooking Lavaca Bay, an arm of Matagorda Bay off the Gulf Coast. “It’s just beautiful,” says Jessica Carpenter, the city’s Director of Economic Development. “It takes you in very quickly. The bay is just beautiful. It’s a stunning location.”

Visitors and residents alike can take in the scenery and a bit of history at Bayfront Peninsula Park, which offers a ship themed play structure representative of French Explorer  René-Robert Cavelier, Sieur de La Salle’s ship La Belle, which first landed on the coast of this area in February 1685. The wreckage of La Belle lay forgotten until 1995 when it was discovered by a team of archaeologists in 1995.  In addition to the play structure the park features a free-access splash pad, lighted fishing pier, boat ramp, and covered picnic areas. “You can come to town, take your kids and go fishing. You don’t have to have a boat and you don’t have to have a plan,” says Tania French, Port Lavaca’s Events Coordinator. “I’ve had people come into town for an event and realize what a great pier we have, so they go to Walmart and buy fishing poles and come back, buy bait from a local bait shop, and are down there fishing in an hour. People don’t know that we have these kinds of resources when they show up to town.”

To make the park even more attractive, the city is working on a multi-use bike-walk path funded in part by a Texas Parks and Wildlife grant. “When it’s complete, it will have a one-mile walk path through the park, lighted with solar lighting and an approximately half-mile loop for bikes that will also be lit,” Weaver says. “That’s going to open up a whole new opportunity for us for events like bike rodeos and runs.” 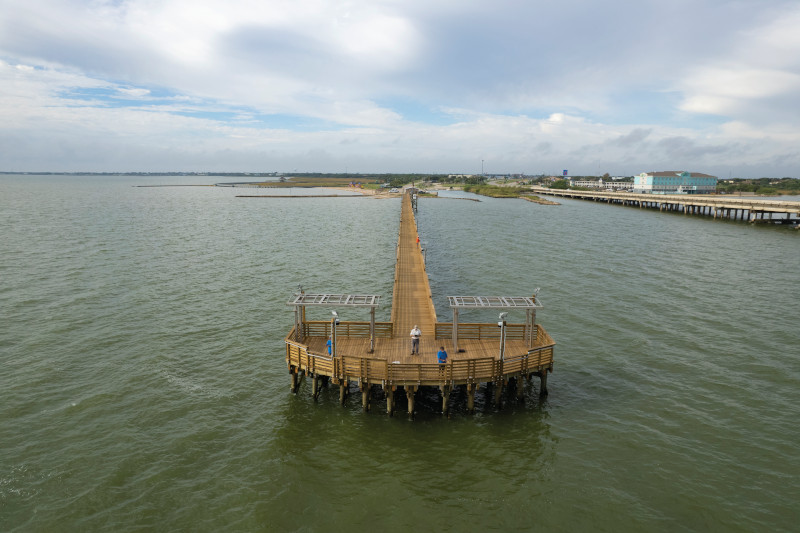 Over at Lighthouse Beach Park young families can put their toes in the sand and make a splash in the shallow waters, while avid birders can search the wetlands for more than 429 bird species that have been sighted in the area. The park includes the Alcoa Birding Tower, as well as the Formosa Wetlands Walkway, which is an elevated walkway that runs through a wetlands area. The walkway is made entirely of recycled plastic and at the time of its construction was the longest recycled plastic boardwalk in the world. “Not only is it just peaceful and nice, you can take your binoculars and your camera and you just don’t know what you’re going to find,” French says.

When it’s time to come inside and get to work, there’s plenty of opportunity in Port Lavaca. The Calhoun County city has no shortage of work thanks to its large industrial manufacturing sector. The area is home to Seadrift Coke, Dow Chemical and INEOS Nitriles. Located just across the causeway in Point Comfort is the area’s largest manufacturer, Formosa Plastics Corporation. The workforce for Formosa predominately lives and purchases here in the city,” Carpenter explains. “We have a significant industrial footprint here that is the driver of our workforce and economy.”

Not only does Formosa bring with it a strong workforce, but a diverse one at that. The worldwide company is based in Taiwan, and brings over many of its international employees to work in the plant. According to Carpenter, “Formosa pays for training and certifications for all their employees. So we have  Hispanic, African American, Burmese, Taiwanese – it’s quite a diverse perspective for such a small population count.

Aside from offering coastal living and great job opportunities, Port Lavaca has fostered a small-town feel with a true sense of community. “People matter here,” Carpenter says. “That’s something that drew me in and to this day it just makes my heart grow more and more for Port Lavaca. Everyone is so invested in this community. We all know each other in a sense, it’s kind of a six degrees of separation thing. We are so willing to step up for one another and to lift up one another as well.” Being a newcomer to the area herself, having moved just over a year ago from Seattle, Carpenter has been drawn in by the close-knit atmosphere. “I love the community mindset, the endearment of the people on an individual level,” she says. “And of course, being on the bay is just beautiful.”

At the heart of the community, Port Lavaca boasts top-notch medical care through Memorial Medical Center. Founded in 1950, this 25-bed critical access hospital features specialty clinics and the latest in diagnostic equipment. The community also takes pride in its award winning school district. The Calhoun Sandcrabs and Sandies are recognized throughout the state and beyond for both academics and extracurricular achievements.

Port Lavaca puts on a series of events each year to help bring the community together even more. Pre-COVID-19 the city hosted a couple of large “signature” events each year, including its annual Flip Flop Festival. “We built a festival around being on the coast and wearing flip flops,” French says. “We’ve had some big name artists perform at this festival. We pull people from all over the country.” Since COVID hit, they’ve had to make some changes, putting on several smaller events instead – including a scaled back Flip Flop Festival. “We’ve found ways to adapt,” French shares. “The city invested in a big blow-up screen and we do drive-in movies that are bayfront, and we also do a summer concert series with local artists.”

One of their biggest successes was last year’s Rock Festival. And that’s not the “rock ’n roll” kind of rock.

French recalls, “The festival was based on a Facebook post where some kids were throwing brand new, expensive landscape rocks into the bay. They shouldn’t have been throwing those, so we built a festival and brought in good rocks for throwing and we educated kids on why we shouldn’t throw those very expensive rocks.” The rock festival went viral and was featured on news reports from Houston to St. Louis, Nashville, and Portland. Organizers are already working on a follow-up event for this year. “We are an ever-adapting community. Give us COVID and we’ll find a way around it. Give us rocks and we’ll find something to do with them,” French adds.

The city is adapting in other ways, too. Seeing its own potential for growth, Port Lavaca has several projects on the go to make the community an even more welcoming space. “We’ve got a lot of things going on,” Weaver says. “I can tell you that we are preparing for growth. We know what is on the precipice. It is coming. So, we’re looking at making some significant improvements and expansion to our wastewater treatment plant. We are looking at some upgrades and expansion in our water distribution system. We’re looking at back up alternate sources for water supply that will handle growth when it comes. And we have one or two projects going on each year to make improvements to our streets.”

They are also working to make the city more pedestrian friendly. For each road project they do, they incorporate a project to add a sidewalk to at least one side of that road. The Texas Department of Transportation is currently installing a sidewalk on both sides of State Highway 238, which runs through Port Lavaca from the south end all the way through town. A large walkway and bike path connecting downtown to the bayfront is also in the works. “We are following through and making it a priority for the city to be pedestrian friendly, particularly downtown,” Weaver notes.

Moving into the future, the city has a comprehensive plan in place that they are accomplishing one step at a time. The plan includes boosting tourism, prioritizing the environment, and making sure there is more housing readily available for their inevitable growth. Like most of the country, Port Lavaca is suffering from low housing inventory. They are in need of more entry level homes, mixed family and multi-family rentals and mid-level homes that fall somewhere between custom builds and entry-level.

They have developments on the horizon for new homes, but many contractors have postponed their projects due to high supply prices and long lead times. The city is hoping new projects can begin again as soon as the economy stabilizes.

Carpenter emphasizes, “Housing is a huge priority for this town – immediately and long term. We want to improve the housing inventory and get the diversity of housing that we need, both in the real estate and rental perspective.”

Overall, Port Lavaca hopes the future will shine a spotlight on the city so it can be discovered for everything it has to offer. “We are working on that path,” Weaver says. “In five years, I’m hoping we’ve successfully completed all the things we’re working on now, and working on even more improvements for our growing community.”

Visit us at www.aqua-metric.com to learn about our SmartCity Solutions today.

CivilCorp, LLC has been providing civil design services of the highest quality for over 14 years in the Victoria, Houston, Round Rock, and Corpus Christi areas. CivilCorp specializes in offering infrastructure, transportation, and site development engineering, as well as a full range of land surveying services including boundary, topographic, right of way, and control throughout the state of Texas.

Douglas, Arizona – Building the foundation for...