Peachtree Corners, Georgia – ‘The Sky is the Limit’

‘The Sky is the Limit’

Since its inception, Peachtree, Georgia has been a city of innovators. And that hasn’t changed, even with the COVID-19 pandemic throwing the Gwinnett County community some serious curveballs.

“All municipalities, all local governments are having unique challenges, but what you do with those challenges is sometimes what separates different communities,” says Brian Johnson, Peachtree Corners’ City Manager. “Our well-planned out moves that are more pre-emptive in nature and less reactive might keep us from enduring any long-term consequences of what curveballs the pandemic has thrown all of us.”

The city’s centerpiece and hub of innovation, Technology Park Atlanta, was founded in the late ‘60s by Paul Duke as a way to provide jobs for Georgia residents working in the tech field. Soon a planned community grew around it, as did the jobs, and the innovation continued to build. The color printer and modem were invented in Peachtree Corners and now, through the publicly funded Curiosity Lab, researchers have a real world test environment for intelligent mobility and smart city technology.

Peachtree Corners was formally incorporated in 2010 and is now a thriving metropolis of 50,000. The city is known for its technology advancements, as well as its 1:1 job-to-resident ratio. When the pandemic struck and more people were having to work from home, the city’s major companies didn’t necessarily need the same kind of bricks and mortar office space they once required. But that didn’t stop the innovators in Peachtree Corners from finding the perfect solutions.

Johnson reports, “We have had some companies say, ‘Look, we still need to have employees come in, so we are going to wall off a lot more offices than we had back in the day and do less cubicles so that people have a barrier.’ That has helped in that some businesses needed more square footage, even though they’re not necessarily adding more employees. It’s been an excuse for companies to look for better amenities, better location, better facilities than they had prior.” 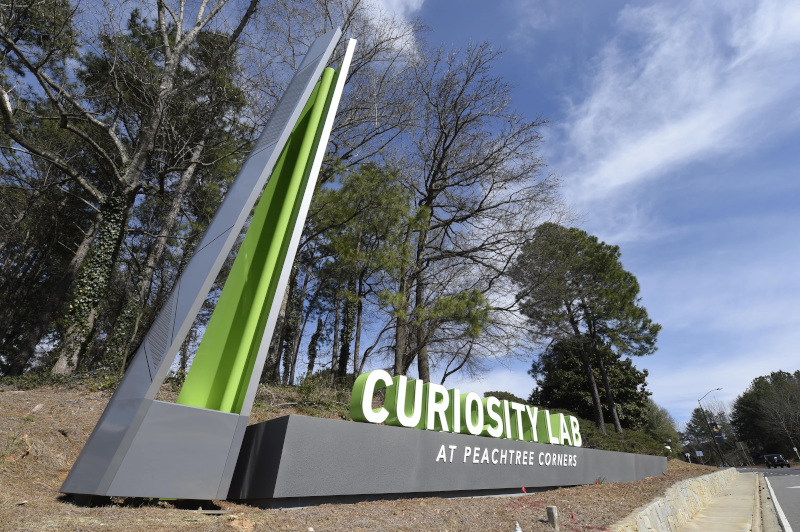 Intuitive Surgical recently announced that Peachtree Corners will become the site of its east coast headquarters. The robotic-assisted surgical equipment developer is building a $600 million campus, which will create 1500 new jobs. “There were a lot of factors that went into play, but certainly in their case, our relationships with companies because of Curiosity Lab was something they mentioned was a significant factor in their selection here,” Johnson adds. “We have relationships with companies like T-Mobile, Bosch, Cisco, and Qualcomm, companies that have components inside of their medical devices, and we also have formal relationships with countries in which Intuitive would like to expand into. That always helps.”

For the city’s smaller businesses, Peachtree Corners has made some small changes that have had a big impact on keeping those businesses alive. Johnson admits, “The pandemic has certainly weeded out the weak from the strong, but the city has taken a rather proactive stance knowing that there is going to be a lot of challenges and pressure they are under.” In that regard, the creation of “parklets,” which are outdoor seating areas in on-street parking spaces, has been allowed. These spaces let restaurants and other businesses expand their offerings in an outdoor setting. “We’ve done a lot of permitting of outdoor renovation for permanent, expanded outdoor amenities or more drive-throughs, or just some of the things that COVID has forced those companies to do to survive,” Johnson says. “The city did little things to help out, but they add up. We’ve also done some big things.”

That includes putting federal money directly into the hands of for-profit and non-profit organizations. Johnson acknowledges, “We could have put it to good use as well, but the Mayor and Council here felt like putting a significant amount of the money – a majority – into the hands of direct organizations is better, because they are in the best position to decide how this money should be used to keep them in business.”

As a city of innovators, some even saw the pandemic as an opportunity, rather than a curse, when it came to starting their own small businesses. “Some companies have gone out of business, some have relocated, but in their place others have taken advantage of unusual times with low interest rates and other incentives to start a company. We’ve seen some unique changes based on COVID,” Johnson says.

A significant change was in the hotel sector. The pandemic has altered business travel, potentially for good, and with a city with a large tech sector that relies heavily on business tourism, it could have been damaging. Peachtree Corners is home to many hotels, many of which had no clear path out of the lulls produced by the pandemic. Johnson attests, “We have seen a few hotels lose their large corporate flag, so we worked with those property owners in some cases to just demolish the property because it was time for it to go. But we’ve also done some things to help ones that were still a really good property, but at risk of losing their flag.” 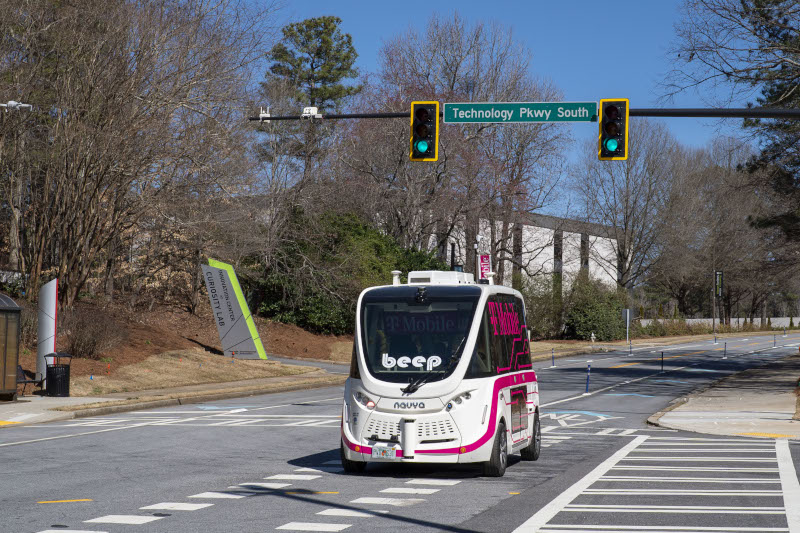 One example is a former extended stay hotel that offered larger suites complete with full kitchen areas and separate sleeping space. “We pre-emptively created an ordinance allowing for conversion of hotels that met certain criteria, both in their performance and their configuration, and allowed them to convert from an extended stay to an apartment,” Johnson explains. “So we had an extended stay that converted to an apartment community by renovating those units and expanding their amenities.” The result is more housing options for the city, and a building that won’t become an eyesore.

The city’s innovative planning extends past satisfying business needs. At the beginning of the pandemic, Peachtree Corners made decisive choices to put recreation at the forefront of their decision making. An 11-mile multi-use trail system had begun construction in the city four years previous, with half a mile to a mile completed each year. “We realized that there was a need,” Johnson says. “People were wanting to get outside, so we ramped it up. We constructed things like pedestrian bridges over high-trafficked roadways so people can cross safely and without stopping traffic. And we’ve done a lot of work getting people to and from recreational areas on the Chattahoochee River.”

The trail system has been a boon to residents, but it’s also become a real draw to businesses looking to relocate. “There have been companies that have decided to relocate here, some significant ones – large corporations which are creating lots of jobs – that are telling us the multi-use trail system was certainly an important component because they wanted their employees to have access to get outside and walk during the day and to feel like they get to live close enough that they can walk to the office. So, it’s paid off for us to do this.”

Businesses in the area have no shortage of skilled talent to choose from, as Peachtree Corners works diligently with local and state educational institutions to ensure the next generation is trained for the future. The city has relationships with the University of Georgia, Georgia Tech, and Georgia Gwinnett College. Peachtree Corners also has its own STEM high school, which has partnerships with the city and Curiosity Lab for training in things like drones and cybersecurity. “We have mobilized internship programs for these students to get into some of the companies that are headquartered here and get great opportunities to get exposed to some of this technology before they move on to college,” Johnson says.

As Peachtree Corners moves into the future, the city of innovators will continue to create unique opportunities for its residents. “I’m excited about the potential that we have to take advantage of,” Johnson boasts. “The sky is the limit.”

Astra offers strength and experience to construct spaces that transcend communities. For 28 years, we have built public projects in and around the Southeast that not only look good but have a long-lasting effect on the community. Our Team’s experience includes depth of knowledge to manage, improve, and construct your projects!