Since its establishment in 1623, Dover, New Hampshire has amassed a long and storied history in commerce. Beginning as a colonial seaport that fostered a healthy shipbuilding industry in the 1700s, this city, nestled in Strafford County, repositioned itself as the nation’s leading manufacturer of cotton goods with the development of several textile mills peppered along its bustling shoreline. That was followed by the development of a successful brick industry that existed until the mid-20th century.

Growth and innovation continue in Dover, today. Ever-evolving, it keeps abreast of the latest trends and technologies for its almost 34,000 residents; many of whom are young professionals. “We want to plan for the next several decades so that we don’t have a geriatric or gentrified community,” says Dover’s Economic Development Director, Dan Barufaldi. “We want to continue to grow jobs and bring people here.”

The city knew the key to accomplishing that was to attract people with disposable income. In essence, Dover was ready to face the new age and it did so with gusto. “Over the last decade, the answer seemed to be to attract companies that would require fairly good credentials of the workers,” notes Barufaldi. “We were successful in going out and attracting a number of those businesses – engineering, technical, machining, design, that sort of thing.” He has seen, first-hand, the city’s renaissance over the past 11 years, recalling, “We initially started here with a bit of empty storefronts. Old textile mills in the midst of the city were also only 40-percent occupied.” 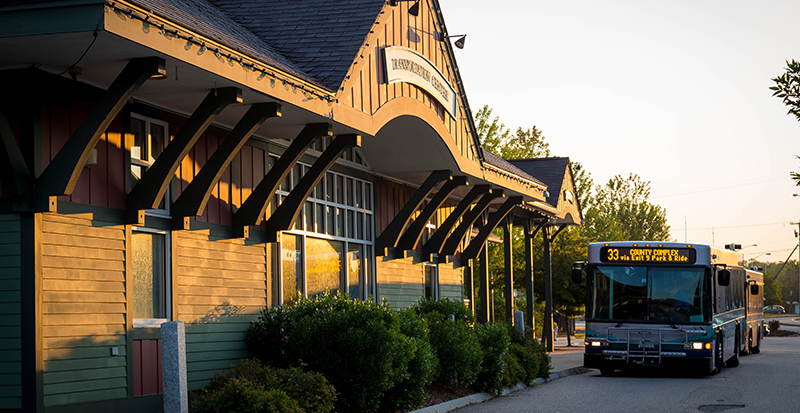 With extensive renovations and upgrades, abandoned mills and tired storefronts were transformed into enticing, modern structures, accommodating new business ventures and contemporary apartment units. Dover now tempts the palate with 72 restaurants, 35 of which are downtown, that offer a world of flavors right at Dover’s doorstep. Barufaldi points out, “You can get any cuisine you want here and the quality is really good. We have a lot of local retailers – people come in for the restaurants and then stroll through the custom shops downtown. We now have a very vibrant downtown.”

Cocheco Falls Millworks, that has long served as a central focus of the city, now houses about 800 office workers and 400 apartments. Development continues along the waterfront and the Cocheco River Walk, thanks to ongoing cooperation between the community’s public and private sectors, including the Office of Economic Development, the Greater Dover Chamber of Commerce, and the Dover School System. Waterfront development will encompass about 32 acres and is expected to include a hotel and a park area with a kayak launch and boating amenities at a city infrastructure cost of $6 million.

Refurbished downtown storefronts offer a mix of commercial/residential opportunities, again, enticing young newcomers with exciting social connections just steps from their homes. Many residential areas are near major highways and rail access. Residents of the state of New Hampshire do not pay personal income tax, nor is sales tax added to their purchases, further enhancing the lure of the area. Property, fuel, meal, and boarding taxes help fund infrastructure projects such as roads and bridges.

While the city enjoys the fruits of its foresight, Dover hasn’t come this far in order to now sit on its laurels. Dover is the largest city in the New Hampshire seacoast region and the fastest growing city in the state. Barufaldi explains, “What keeps me excited is that we have over $100 million worth of development going on currently, with more in the wings. We also have one of the lowest median age populations in New Hampshire. We have 17 current developments underway, or recently completed, and we have done some rather extensive strategic planning for the long haul in terms of rezoning.”

The recent completion of a new police station and parking garage is credited with bringing in enough revenues to keep those structures self-financed. Dover also boasts two industrial parks and Enterprise Park – a newer business park that currently houses 17 companies and employs upwards of 800 people. A lot of those people live in downtown apartments.

With the Downeaster Amtrak in the center of the city, people can be in Boston in 55 minutes. The transit service offers free Wi-Fi in both directions, so commuters can catch up on work or social issues during the trip. “Boston salaries are considerably higher. So, we have a number of young professionals living in our converted mills and a number of our luxury apartments,” Barufaldi notes. “We put in over 500 apartment units in the past three years and they’re fully booked. As every apartment project comes to fruition, it’s booked before it’s finished, so we have been very fortunate there. The Downeaster has been a very important part of that for us.”

Businesses thinking of relocating to Dover, or entrepreneurs thinking of opening a new business, are met with open arms in this bustling community where there is always room for more commerce. According to Barufaldi, “We have a lease-to-buy program where, if a company has the requisite financials, the city will finance with a bond, the lease of a fairly generic building in Enterprise Park, or other city land and allow them to lease that for up to five years. The lease-to-buy candidate pays the bond payment, the interest on the bond payment, and a small administrative fee during the lease term. The lease payments can be used as a down payment at the time of purchase within a 5-year lease window. We also don’t take anything in terms of the increased equity that develops in the building over the five years, so what we buy it for is what they buy it for and that seems to work out pretty well for us.”

Five economic revitalization zones are also available and are awarded by the state. They enable businesses that invest in infrastructure, jobs, and a specified level of jobs, to receive up to $40,000 a year in business profits tax exemptions or enterprise profits tax exemptions for up to six years. “For somebody making a transition from a rental or lease property to their own building, that can be an important incentive,” says Barufaldi. Dover is also conveniently situated within reach of four major airports, the Port of Portsmouth, and the Pease International Trade Zone.

Just as Dover has witnessed a shift in the way it does business, so too has Barufaldi in his job as Economic Development Officer. He acknowledges, “I not only try to go out and attract businesses with high-tech requirements with better than average compensation levels, but I’m now finding that what I’m really trying to attract for the future – and we’re doing it – are people with highly desirable technical skills. These people, more and more, work remotely so they can live anywhere they want. So, recently, we’ve been selling the quality of life in Dover.”

Housing stock is plentiful with a pick of apartments, houses, condominiums, and assisted care facilities amid a choice of urban, suburban, and rural living. Major employers include Liberty Mutual and Cambridge Steel. In addition to a top-notch school system, Dover is equipped with a major hospital complex and a career technical center for the trades.

While visitors are drawn to Dover for its unique shops, world-class restaurants, and skilled workplaces, they also appreciate the beauty that surrounds it. Barufaldi shares, “We’re half-an-hour from the coast to the beach, and we’re about 50 minutes from the White Mountains. So, for every season of the year, there’s great sporting.” Each spring, the locals gather in the city center, armed with wheelbarrows, shovels, and rakes to clean up their city. “It’s probably the best place to live that I can imagine,” says Barufaldi. “We’ve got fresh air, we’ve got lots of woods around us, lots of parks and a beautiful, beautiful natural environment. And it’s a prosperous place; it isn’t a geriatric place like a lot of New England. I’ve never been in a place where people take such pride in their municipality. We have quality of life in so many ways.”

Dover is the oldest permanent settlement in New Hampshire and is situated an hour from Boston, Portland, the White Mountains and Lake Winnipesauke. Renovations and infrastructure updates are now in the works as Dover excitedly prepares for its 400th anniversary in 2023. Through meticulous planning and a willingness to embrace change, Dover has established an identity for itself well beyond that of a mill town. As the city carefully preserves its heritage while keeping a strong focus on a future full of potential, the underlying theme resonates loudly – pride of place.

Power Question: From a business perspective, what...