Panther Industries – The little company that could

The little company that could

Panther Industries, based in Highlands Ranch, Colorado, is a manufacturer of automated labeling equipment. According to Christian Dow, company Vice President, Panther’s founder, James Thompson, became acquainted with print-and-apply labeling at a meatpacking plant in which he once worked. While there, he improved upon a simple version of the plant’s labeling equipment by replacing a relay-logic system with a PLC (Programmable Logic Controller), a digital computer that enhanced and sped up the electromechanical labeling process.

“This was one of the first programmable logic controllers that was implemented into a labeler in those days,” says Dow. “Later on, Jim became an engineering manager for a company called Stadia Label, the manufacturer of the equipment that he put the PLC onto. They had recognized what he had done and were floored by his innovation. That company moved to New England, but Jim remained in Colorado as a contract employee, working remotely. And after a few years, he decided it was time that he started his own company.”

Panther’s first product was the Panther 2000, a fast, reliable, configurable, and rugged Print-and-Apply labeling system with a display that offered self-diagnostics, while providing informative data and accepting user input. The first machines were sold to the Colgate-Palmolive Company, and Dow relates that the Panther 2000 is still in production, today, being made by the company’s 22 employees in its 36,000 square foot manufacturing facility in Highlands Ranch, Colorado.

Panther maintains a wide network of industry partners, integrators, and resellers, who help widen the company’s reach. “We do a lot of business in the United States, and Canada is our second largest market,” says Dow. “But we also do international. This year, we have systems being installed in Mexico, Brazil, South Africa, Australia, and India.”

Panther provides both Print-and-Apply labeling systems as well as Pre-Printed label applicator systems. Over the years, the company has also created many special solutions for clients that have since become standard in the industry. Examples of a special system might be one that puts flag labels on thin medical device cables, and another that is tailored to wrap and label pharmaceutical bottles moving swiftly on a conveyor belt. Indeed, it’s been Panther’s continual innovations in engineered labeling solutions that have differentiated it from its competitors.

More recently, the company’s technological expertise has resulted in some rapid expansion. Dow says that over the last couple of years, Panther Industries has moved resolutely into the logistics of the e-commerce sector and is now a supplier to some of the biggest online retailers, including many Fortune 100 companies. “Our systems are really tailored to do the e-commerce business, labeling a lot of different-sized and different-shaped product – on the fly – in a way that doesn’t need any human intervention or interaction with the product as it goes by,” Dow explains.

Another aspect of Panther Industries that separates it from the competition is the capability the company to communicate with its own machinery and for the machines, themselves, to interact with one another up and down the supply chain. “We’ve always allowed, and had the ability to give, all kinds of information based on every single status that happens to our machines,” says Dow. “Since about 2007-08, with the launch of the Panther P8, we’ve had all this ability over the internet, and Ethernet/IP, and Modbus/TCP, and TCP/IP, and other networks that we communicate over, to give our customers all this information. Meanwhile, we’re getting to a point where we’re going to be offering the next generation of communication, increasing our speeds, and creating even more functionality in our system to apply more labels in less time, and allowing a single line to do more throughput.”

In addition, because Panther systems have error reporting and recommended solutions either on a system display, or right within the system, itself, Dow says that “most operators can solve just about any problem that comes up.” However, if they can’t, the company offers a 24/7 phone support. “This is something where we’ve always stood out differently from our competition; we were the first ones to go down this path,” he continues. “We give the operator the ability to be the first line of defense and then we have 24/7 support at no cost to the customer for the life of the machine. So, even the systems that we have out there that are 16 years old, we still offer 24/7 support and we still support the components on those systems.”

Because of Panther’s combination of innovative engineering, precise manufacturing, and excellent customer support, Dow says the company has prospered largely through word-of-mouth, and with the aid of a few strong partners and integrators that have carried its banner and helped to get the company to where it is today. In addition, Panther has always participated in the industry’s largest trade shows: the PACK EXPO put on by the Association for Packaging and Processing Technologies (PMMI), and the Material Handling Industry (MHI) of America’s MODEX and PROMAT events. But last year, the company finally added its own marketing manager, Spencer Winegarden, who is now responsible for its digital strategy, including the oversight of a much more optimized website and an enhanced social media presence.

Dow admits that Panther’s robust growth has created some challenges for this pioneering company with an increasing portfolio. “We’re growing from a very small company only a few years ago to something that’s getting into a medium size,” he says. “We’ve needed to add more processes in place to support that growth. When you’re a small company, you can be very innovative, customer-centric, reactive, and provide a quality product with excellent service. Our goal is to continue to do that – but still be as agile.”

And Panther Industries is nothing if not innovative. “We’re spending a lot of time and energy and investment in our R & D,” says Dow. The company is getting ready to launch a new system, the Predator P9, which is a successor to the P8, one of the company’s current flagship models.  “It’s innovation that we’re most proud of,” Dow states emphatically. “Of being a leader in the industry. Here’s a little company out of Colorado. We shouldn’t be as good as we are and have as much of a presence as we do. But based on the people we have and the way we do things, we’ve made an impact. And this year has been a year of fantastic growth for us.”

And that’s just the way it should be when a company’s innovative engineering, its precision manufacturing, its network of industry partners, and its excellent customer service come together to meet its clients’ labeling needs; proving that Panther Industries is truly the little company that could.

WHAT: A manufacturer of automated labeling equipment

D.L. Neu & Associates – D.L. Neu & Associates Inc. is a material handling equipment supplier based in Wyoming, Michigan. The company provides its services from the smallest material handling projects through, and including, whole turnkey systems, specializing in concept layout and detail product/system engineering. It is staffed with engineers experienced in a number of different industries, including: grocery distribution, pharmaceutical, parcel, retail, manufacturing, and e-commerce. – www.dlneu.com

StreamTech Engineering, LLC – StreamTech designs, manufactures, and integrates innovative automation systems with advanced software and controls to enable its customers to reduce labor, improve quality, and speed their operations. Typical systems include automated sortation and shipping, scanning and labeling, picking and packing, robotics, checkweighers, and automatic box opening systems. The company assembles, integrates, and tests systems at its facility before implementation to minimize disruption and downtime and provide for a seamless installation. – www.streamtecheng.com 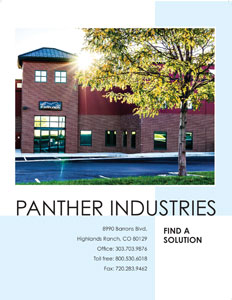