A perfect place for business

Looking for the ideal spot to slow down, unwind, and just get away from it all? Then look no further than beautiful Malahide Township in southwestern Ontario. Only a 45-minute drive southeast of London, the rural area is full of charming villages, quaint retail shops, shimmering beaches, and scenic walking trails. Known for its agricultural industry, residents and visitors can pick produce straight from the fields or buy it fresh from a roadside vendor.

Malahide’s rich history officially goes back to 1810, when it was named after Ireland’s Malahide Castle, the birthplace of Colonel Thomas Talbot, the Land Grant Administrator. In 1998, the current municipality amalgamated from the original Township of Malahide, the former Township of South Dorchester, and the former village of Springfield. Today, Malahide maintains its rural roots while also encouraging new businesses to succeed.

“We’re an agricultural centre with an overall population of around 10,000, but we have three small urban centers,” explains Township Mayor Dave Mennill. “There’s Springfield with about 600 people, Copenhagen with about 200, and Port Bruce with roughly 900 in the summer and 150 in the winter. For the last 50 or 60 years, Malahide has been a conglomerate of immigrant societies. Initially, it was the Scottish and English. After World War II, there were Dutch, Belgian, German, and Hungarian because of the tobacco farms. In the 1960s, Mexican Mennonites came to the area mostly doing agricultural labor.” This latter group originated from Manitoba, but in the 1920s when the province mandated children attend public school, most moved to Mexico keeping their Canadian citizenship. They relocated back to Canada when Mexico become dangerous during the 1960s.

Today, the grandchildren of these first-generation families are the driving force behind Malahide’s business landscape. Mayor Mennill uses an example from the Amish community, which he says is “all agricultural-based. They sell organic fruits, vegetables, eggs, and meat. There’s even the ‘HOPE Eco-Farm Store’ that sells lactose free dairy products, including water buffalo yogurt. It’s quite popular among the tourists.” Matt Sweetland, Director of Public Works, adds, “Malahide has a lot to offer. We’re rural, but absolutely full of engaging community-minded people. We’re spread throughout a large land area featuring intimate villages, farmland, and even beachfront cottage communities. We have many of the same amenities the larger cities do, albeit in a quieter setting.” 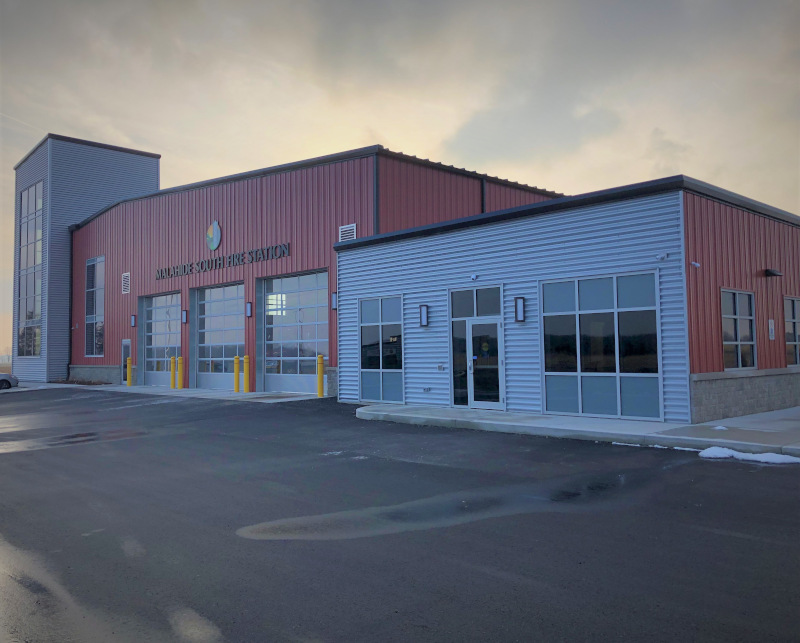 Adam Betteridge, Chief Administrative Officer, echoes Sweetland, believing the residents to be both resourceful and entrepreneurial. He shares, “We work to accommodate their needs to start and grow businesses. We have some great ones that aren’t in an industrial subdivision but certainly within Malahide Township. We’re focusing our hopes for future growth in the village of Springfield; to truly unlock this entrepreneurial spirit. Whether you’re a resident or an entrepreneur looking to start a business, this is a great place to do it.”

There are several trucking companies based in the area, as well as many skilled tradesmen including electricians and plumbers operating mobile businesses. Malahide is also home to the Ontario Police College (OPC), a large police academy located just outside of Springfield. Mayor Mennill asserts that the area is largely a bedroom community for London and St. Thomas, but the Council is working to change that by attracting more entrepreneurs. Elgin County’s Economic Development Officer has even established connections with the film industry; there could be future opportunities for movies or TV shows to film in the Township, attracting even more interest in the area.

More businesses mean more people and more housing. “There is a high demand for housing, and we can’t seem to meet it at present,” Mennill admits. “Usually, we’re putting up 25 to 30 single family houses per year, but that’s not enough. Springfield is our primary growth area and there’s potential for about 500 houses, but we only have sewage there. No municipal water. We’re trying to get support from the provincial and federal governments to help extend the water pipeline.”

Betteridge adds that new lots are created through a land severance process, but it’s “a slow and arduous way to create housing properties.” It involves the authorized separation of a piece of land to form new lots, but only through consented approval. The short-term aim is to focus on Springfield and hopefully, within the decade, extend to Copenhagen or Port Bruce. Meanwhile, broadband is another project the Township is improving. Mayor Mennill reports, “We’re looking at how we can enhance our connectivity. If COVID has shown us anything, it’s that we can work from home efficiently. People moving from urban centers to rural areas ask, ‘what’s the connectivity?’ Unfortunately, if you answer “not ideal”, they look elsewhere. So, we’re working on solving that problem.” 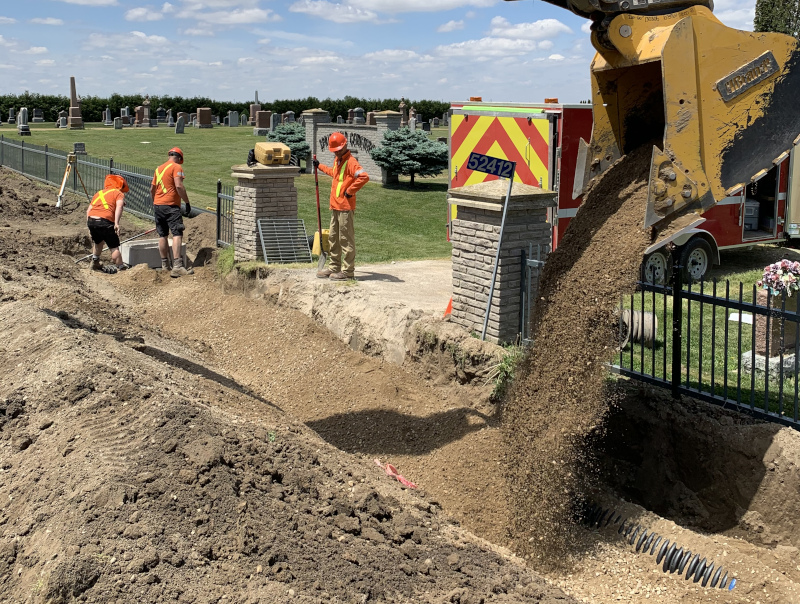 “We do have facilities offering great space for community events,” says Sweetland. “Springfield’s Malahide Community Place has meeting places and a banquet hall accommodating between 15 to 250 people, complete with a catering kitchen. There’s also an outdoor area with three clay ball diamonds as well as nice walking trails. Another venue, the South Dorchester Community Hall has a seating capacity of 60 people and a fully equipped kitchen, a beautiful walking track, and playground equipment.” These facilities are just a glimpse into the many available amenities. Since Malahide wraps around the full-service town of Aylmer, residents have easy access to many retail choices. Mennomex, a Mexican grocery store offering delicious hot food as well as local Amish and Mennonite goods is a popular favorite. For those looking for a larger urban downtown, London and St. Thomas are close by.

With residents travelling to these nearby cities for work or pleasure, the roads need to be well-maintained. The Township is responsible for 400 kilometers of roads including both county and Township ones. Malahide partners with Elgin County, where the township maintains the roads and then the county compensates Malahide for expenditures. This partnership includes other shared services such as Malahide Fire Services, Paramedic Services (EMS), and GPS. The Township also maintains three water utilities. According to Sweetland, “We have the local Malahide water main with around 600 connections, the Aylmer Area Secondary Water Supply which is 14 kilometers of 18-inch water main, and Port Burwell Area Secondary Water Supply System which is 37 kilometers of 12-inch water main. Springfield has about six kilometers of municipal sanitary sewers, but we’re investigating possible water expansion and whether it’s financially feasible for the responsible way to grow.”

Being a rural area, Malahide does rely heavily on municipal drains and the province’s Drainage Act to protect the farmlands from stormwater and flooding. In 2020, the Port Bruce pier was reconstructed to manage flood risk, since it’s a low-lying area. The structure also helps mitigate dangerous ice dams during the winter. The municipality is also a big supporter of renewable energy sources. Lake Erie Wind Farms has 68 turbines, and 10MW Silvercreek Solar Park is located on Vienna Line. The Mayor says there are lots of “small housing projects” that also have two or three solar panels on the roof.

Looking forward three to five years, Mayor Mennill shares, “We want to get water to Springfield, which will accommodate about new 500 homes. That’s probably top priority. Second is improving the broadband connectivity for all our residents. That’s so important to be able to work or do business from home. Without proper connectivity, that’s almost impossible.”

Betteridge cites a recent article in The Globe and Mail, highlighting the cities of London and Woodstock, along with their surrounding areas, as the fastest growing places in Canada. He states, “We’re right there; Springfield is 15 minutes (driving) to the 401, and approximately a half-hour to those two cities. So, we’re trying to leverage this opportunity. We’ve tried before, but we’re trying again. We know it’s an expensive and difficult endeavor (to provide water servicing to Springfield). But if we have willing partners, such as developers or representatives at various levels of government to assist us, we hope to get there very soon. There’s some exciting times on the horizon for Malahide Township.”

What: A rural, business-oriented community; population 10,000

“Given the high gas prices and increasing...