Global pandemics, natural disasters, political storms, blows to international trade and industry – all of these remind us that economic conditions can shift in the blink of an eye, sometimes, literally, overnight.

For these reasons and more, recent years have witnessed resiliency emerge as a major theme, particularly within the context of business operations where it acts as a performance indicator measuring a company’s bounce-back potential. But resiliency isn’t just important to private business; it matters for municipalities and economic development organizations (EDOs) as well. Studies have shown that counties with a specialized industrial composition are more susceptible to external shocks, and therefore less likely to spring back into shape quickly once their core industry suffers a downturn. Alternatively, counties with greater industrial diversity have been found to better withstand those economic shocks — their spread shields them from any adverse effects and increases the proportion of demand that can be supplied locally. Therefore, planning for resiliency means considering what would happen if important advantages were to go away.

Located in the western part of the state of Arizona, La Paz County lives by the motto: Recreation for all seasons; opportunity for every business. It’s a motto that speaks to the County’s flexibility and inclusion, and a philosophy that has enabled its private, non-profit, regional EDO to become one of the most successful in the whole of rural Arizona.

“Our population sits at around 21,000, and that leads me to why we formed an EDO back in 2010,” says County Supervisor, D.L. Wilson. “La Paz missed out on the economic and population growth experienced by our neighbors to the north and to the south before the Great Recession. So, during that 2008-2010 recession, we created the La Paz Economic Development Corporation to position ourselves to take advantage of the recovery, and we’ve been, in my opinion, quite successful in doing that.”

The organization has already brought five major projects into the Town of Parker, the County seat. “They’ve brought in Rose Acre Farms—that’s the second largest egg producer in the nation,” says Wilson. “They currently have one farm in operation and a second one under construction. From a County standpoint, we’ve had a number of enterprises over the years. One of the first was a regional landfill, which was put in shortly after the County was formed in 1983. We acquired 640 acres with the intent of taking on more than just local trash. That’s generating some revenue for the County, but not as much as we’d hoped,” Wilson admits, illustrating why a more diverse network of enterprises is good for the health of an EDO’s portfolio.

“We also have a golf course that’s been recognized as one of the most unique in the State. It’s received a 4-star rating from Golf Digest,” Wilson continues. A site often referred to as “The Jewel of the Desert,” the Emerald Canyon Golf Course is carved out of the mountains and canyons overlooking the Colorado River. It was named “Best Exotic Course in Arizona” by The Arizona Republic and is a must-play for any true golf enthusiast.

“They had the Southwest PGA qualifying for the Champions Tour here,” says Ron Drake, County Administrator. “We had the highest average score in any qualifying sectional two years in a row, so they quit coming.” “The course is only about 6,400 yards,” adds Wilson. “It’s a short course.” “But if you don’t hit the fairway, you’re up in one of the canyons,” Drake quips. “It’s hard to find good points about the COVID problem, but with California being closed down due to the COVID restrictions, Emerald Canyon has been busier than ever,” admits Wilson.

“We also have a number of parks,” Wilson adds. “The premier park is La Paz County Park. It has about a mile of frontage on the Colorado River.” An organized campground operated by the County Parks Department, the La Paz County Park is situated in the popular Parker strip area. There are 114 tent and RV campsites, each offering a fire ring, picnic table, access to drinking water, and bathrooms with pay showers. 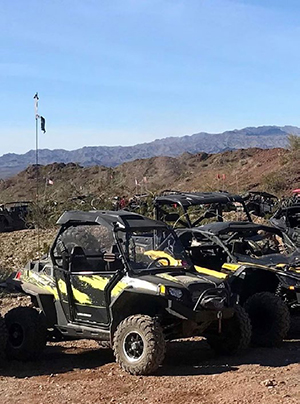 For those interested in off highway experiences, the Arizona Peace Trail—a proposed 750-mile off-highway vehicle trail loop system still in development—offers another great way to enjoy the outdoors. “The Trail encompasses three counties: Yuma, La Paz, and Mohave,” Drake explains. “At over 700 miles, we figure it’ll take five days to get around it on an OHV. We’re not just talking trails. They’ll have amenities accessible from the trail and eventually incorporate businesses into it—a motel at certain places, rest areas, RV parks—to really make it a destination for people around the U.S. Around the world, actually.”

Although La Paz County only counts 21,000 full-time residents, its population can swell up to 300,000 during the winter months. “It does put a strain on our services at the County—our health departments, even our retail, everything’s packed,” Drake admits. “We aren’t built for that many. But we welcome them because there’s such an infusion of revenues into our economy.”

People say “The stretch of river north of Parker is known as the waterski capital of the world, the jet-ski and air chair were invented here” adds Wilson. “It’s a title we claim”. The Quartzsite area in the southern half of the County attracts huge numbers of winter visitors from the northern states and Canada. They spend the winter and enjoy the swap meets and rock shows in Quartzsite. They enjoy the extensive off-highway vehicle trails. They just like being out in the desert when the weather’s nice.”

Producing renewable energy is something the County, as a whole, feels very strongly about. “One of our latest projects is the 6,000-acre parcel of land that we recently acquired from the Bureau of Land Management,” shares Wilson. “We have a world class solar developer who has an option to lease that entire project to put in photovoltaic solar.” The photovoltaic solar farm will be out there on the east end of the County,” says Hoogerwerf.

“One study listed us one of the top six locations in the U.S. with the cleanest air,” adds Drake. “You can see why solar developers are looking here. We’re currently developing the solar project which will be the largest single site solar development in the United States, with two additional similar sized projects planned adjacent to our site and expect to have over 1.6 gigawatts of battery storage. That’s what’s going to make this site unique—our ability to store that, as well as create over two gigawatts of solar generation and deliver power via Ten West Link transmission project.”

Drake also says they’re ready, willing, and eager to welcome data centers over in La Paz County: “We think that’s going to be a big market for us.”

Another unique aspect that gives the County an advantage in recruiting industries over its competition is its geographical location. “Our location is ideal,” insists Wilson. “If you’re looking to serve Southern California, metropolitan Phoenix, or Las Vegas, we’re within a one-day turnaround of all three of those markets. In fact, several of the successes we’ve had have been relocations from the California area.”

“Because of our size and our manpower, this is an opportunity we haven’t put in full force yet, but our location makes us ideal for warehousing,” says Drake. “A business could warehouse here in Quartzsite, which is on I-10. That’s four hours from Los Angeles, and then two hours to Phoenix. You could have one run a day from L.A., warehouse here right over the border—so we’re talking about money saved—and then two runs a day into Phoenix, morning and afternoon. And then you have the State Road 95 that goes north and south to Yuma, or up to I-40, which heads into Vegas.”

The Colorado River Indian Tribes along the Colorado River are a major economic driver supporting two of the area’s key industries – agriculture and tourism. They also operate the stunning BlueWater Resort and Casino, located about two miles from downtown Parker. “It’s rather unique in that it has 200 rooms, all with balconies overlooking the Colorado River,” says Wilson. “And some incredibly beautiful scenery across the river into Earp, CA, where Wyatt Earp prospected for gold after his Tombstone days.”

Although plenty of county-level economic development strategies include diversity, few make it more than a buzzword. For La Paz County and La Paz Economic Development Corporation, diversity is built into their core values. They’ll continue to diversify in terms of industries, particularly eco-recreation. “Two clear advantages come to mind when I think of La Paz County,” says Wilson. “The first is location, because we’re highly accessible from the Phoenix area and Southern California. The second is diversity of recreation. We haven’t even touched on the national wildlife refuges that are here, which provide fantastic opportunities for birdwatching. The fishing opportunities on the Colorado River, Lake Havasu, Alamo Lake—there’s just a lot to do.

WHERE: In the western part of the state

The Eolus team is comprised of highly skilled and knowledgeable renewable energy and energy storage professionals who have collectively developed and constructed numerous projects throughout the U.S. and the globe. Since expanding to North America in 2015, Eolus is growing rapidly with more than 1,500 megawatts (MW) of utility-scale solar plus storage and wind under development or construction throughout the United States.

The company is committed to hiring a skilled and trained workforce sourced from local workers and contractors, at fair compensation, while promoting fair labor standards, and supporting the existing wage base in the local communities, for construction and operation of the project, when available and applicable.

We welcome opportunities to explore the benefits of developing renewable energy partnerships with landowners as well as greenfield, co-development, and acquisition opportunities. For additional information on Eolus North America, visit www.eolusvind.com or contact Lucas Ingvoldstad, Director of Business Development and Government Affairs, at lucas.ingvoldstad@eolusvind.com.