Dunsmuir Municipal-Mott Airport – A mountain diamond in the rough

A mountain diamond in the rough

The City of Dunsmuir, in the Shasta Cascade region of Northern California, is a truly beautiful spot. Mount Shasta and the Castle Crags loom over the Sacramento and McCloud rivers, while visitors find a piece of California they might never have dreamt exists. Lakes and waterfalls complete the experience, allowing a respite from what can sometimes seem like a daunting real world.

The city also has frequent events that draw people from far and wide. During the summer, Dunsmuir hosts many local weekend festivals, including ‘State of Jefferson Brewfest’, ‘Dogwood Daze’, and ‘Railroad Days’. As well as the popular ‘Tribute to the Trees’ al fresco dinner/concert along the river in the city’s pristine park, home to Dunsmuir Botanical Gardens.

What helps make it even more magical is that the community has preserved an authentic 1920s and 1930s look and feel. Dunsmuir’s long connection with the railroad draws railfans to enjoy the sights and sounds in the steep Sacramento River canyon. Dunsmuir is officially a Union Pacific “Train Town” and enjoys many financial benefits because of its relationship with the railroad. It was also an important location during the steam locomotive railroad era; notable for being the site of an important Central Pacific (and later Southern Pacific) railroad yard, where extra steam locomotives were added to assist trains on the grade to the north.

Today, Dunsmuir is renowned as a hub for tourism in Northern California, partly because Interstate 5 passes through the city. “We also have the best water on earth,” says Blake Michaelsen, Acting City Manager of Dunsmuir. “It truly is. The water delivered to the greater Dunsmuir area is pure spring water, straight from a mountain spring to the tap with no chemicals or filtration.” This exceptional water has long been bottled and sold, originally as Shasta Water, and now Castle Rock Water. 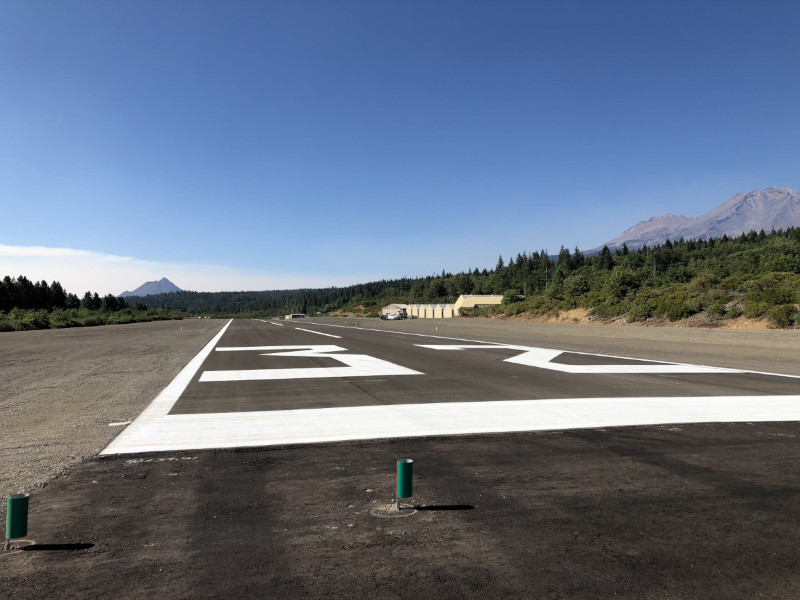 Dunsmuir Municipal-Mott Airport is conveniently located three miles north of the City of Dunsmuir, and ten miles south of Mt. Shasta, in the southernmost portion of Siskiyou County in northern California near the Oregon border. Built and operated by Siskiyou County in the 1930s, the airport originated as an unpaved emergency landing facility for civilian airlines. In 1946, Bert Hawkins became the first Fixed Base Operator (FBO) at the Airport. Over the years several other FBOs have operated, currently there is no one filling the role but the opportunity is available.

“The airport itself is mainly used for firefighting operations and emergency operations for the California Forest Fire Service,” Michaelsen reports. “There are a few recreational flyers who use the airport, and we also have people who come for the fly fishing and outdoor recreation. There are also fantastic restaurants and hotels. So, there is a lot that draws people in.”

Dunsmuir Municipal-Mott Airport is still used as an emergency landing facility, but as Michaelsen points out, it is mainly used by the Forest Service. There are 10 home-based GA aircraft on the property, which covers 126 acres at an elevation of 3,258 feet. It has one runway, 14/32, which is 2,700 by 60 ft. and is classified as a small aircraft, utility airport that is adequate for small (under 12,500 pounds at takeoff) aircraft operations. Because it lacks an instrument approach due to obstructions from the surrounding terrain, aircraft operations at the Airport are restricted to daytime only. The two general aviation areas at Dunsmuir Municipal-Mott are connected by a partial parallel taxiway (Taxiway A). The northeast area is accessed from the land side via the formal airport access drive and is comprised of four smaller privately-owned hangars, a large city-owned hangar, and an aircraft tiedown apron. 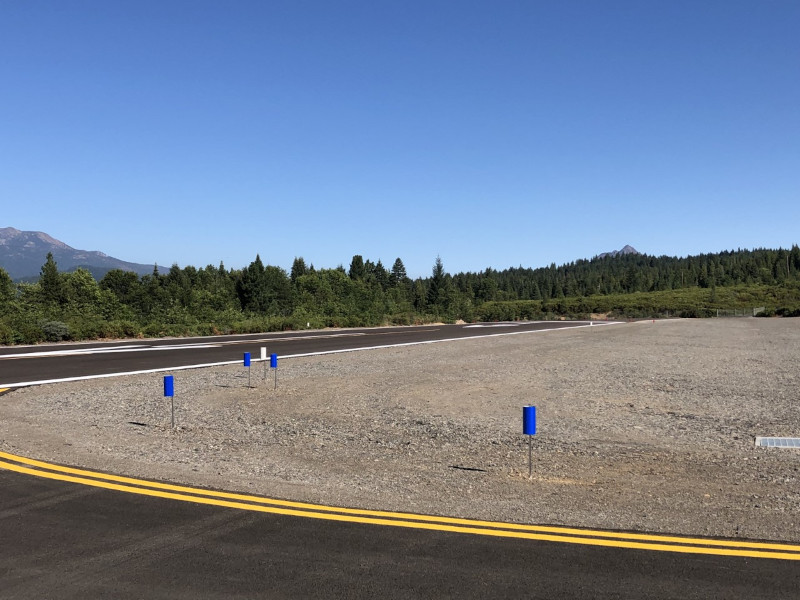 “It’s a pretty bare-bones operation,” according to Todd Juhasz, former City Manager. “The airport sells no fuel, and its abundant amount of prime acreage lacks water and sewer lines, which makes the land, as yet, unsuitable for development. We’ve had various plans that have been put together, including a potential hub for UPS or FedEx, and we’re trying to figure out a way for grant money to help pay for the cost of running infrastructure uphill. There is a great opportunity here!”

That opportunity is directly related to the city’s rich past and offers another reason why the airport is important to economic development in the region. Juhasz explains, “Alexander Dunsmuir, who was the son of a British Columbian coal baron named Robert Dunsmuir, offered to purchase a fountain for the city as long as it renamed it in his honor. That fountain has been moved to a ballfield here – one that Babe Ruth took a liking to. He spent time here and carried on exhibition games. So, it’s a tourist town with a rich history.

“In terms of outdoor activities,” he continues, “people have been hunting and trapping here since the early 1800s and it continued when the Central Pacific Railroad made this a hub. That was when many well to do families from San Francisco started visiting. William Randolph Hearst occupied a 67,000-acre estate called Wyntoon, named after a local Native American tribe; August Schilling, the ‘spice king’, was a long-standing member of the McCloud River Club; and today, the Fisher family, which owns the Gap clothing empire, has three Pilatus aircraft that use the airport regularly to access the renowned private club on the McCloud River – a club which they now own.”

The most recent major infrastructure project was the refurbishment of the runway. It now has a completely new asphalt covering, after a $3.2 million grant-funded project by the FAA. They also made a pilots’ lounge in the city-owned hangar. This refurbishment, incredibly, was finished just in the nick of time when it comes to forest fires. The ribbon cutting ceremony took place just as the massive Lava Fire erupted in the nearby forest. The U.S. Forest Service had their Chinook helicopter parked at the airport for fire fighting even before the Lava Fire grew to cover more than 20,000 acres. This, again, highlights the need for the airport in this region.

“Most of our income comes from hangar rentals and the forestry service,” says Michaelsen, “we also have some discretionary funding – but when it comes to the larger infrastructure work, we are dependant on grants. There are priority levels and that is why we began with the runway. Now we will have to switch gears and look at resurfacing our taxiways. All of this is done according to our Airport Layout Plan, which is now five years old but has led the way in prioritizing where to turn our efforts next. Revitalizing the pavement has been an important step, but we could also work at getting more water and sewer onto the field and building more hangars, because we do have a waiting list. Our goal is to make this into a high-quality airport that will draw people to the region.”

Juhasz sums it up well, noting, “The problem is that people don’t necessarily see what assets we’ve got here. The general fund is propping up the airport to some degree, but it is an airport that’s starting to take shape again. We are a diamond in the rough, and with social unrest, COVID-19, work-away-from-home technology, and real estate dollars that can buy much more here in Dunsmuir than a larger urban area, the discovery of this mountain jewel can be a potentially life-changing find.”