Business View Magazine interviews representatives of Laramie Regional Airport, Wyoming, for our focus on General Aviation Airports in the U.S.

Tucked down into the southeast corner of Wyoming, Laramie is a city of adventure, with the Snowy Range Mountains to the  west and the Medicine Bow National Forest to the east. This is cowboy country, and it has been ever since the stage first rolled through what was once the Dakota Territories.

Laramie is named after Jacques Laramie, a French trapper who disappeared in the early 1820s in what is now called the Laramie Mountains. The city was founded in the mid-1860s as a tent city near the Overland Stage Line route, the Union Pacific portion of the first transcontinental railroad, and just north of Fort Sanders army post.

Originally known as Brees Field, the Laramie Regional Airport traces its history back to 1934 and was named in honor of United States Army General Herbert J. Brees. The runways were paved in 1944 to allow B-24 Bombers in and out. Airline flights started in 1945, in 1959 the terminal building was built, and in 1992 the name was changed to reflect the regional character.

Laramie Regional Airport covers some 1,580 acres and has two asphalt runways – 3/21 is 8,502 by 150 feet and 12/30 is 6,300 by 100 feet – and sees around 10,000 operations each year. It is owned by the Joint Powers Board, established by both the City of Laramie and Albany County with five total members, two members from the city, two from the county, and a joint appointment. 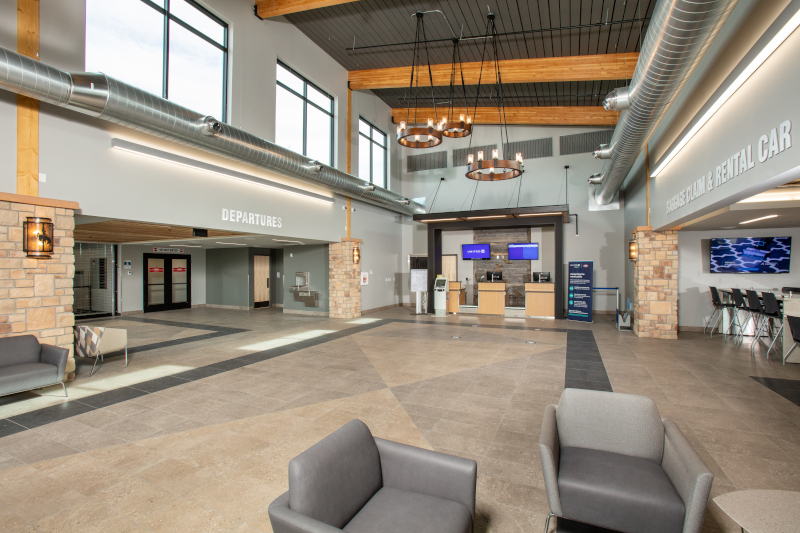 “We are really starting to focus on the general aviation side of things,” says Amy Terrell, who has recently come on as Airport Director. “Our FBO for the general aviation side of things is Cowboy Aviation and they have a super cool mascot of a cowboy riding on top of an airplane. This is an area that can use a lot of expansion, since we have generally focused on the commuter airline side of things. As we build up the infrastructure there is a lot of room for growth.”

“We are considered a part of the EAS, which stands for Essential Air Service,” adds Tim Stamp, Chairman of the Laramie Joint Powers Board. “It is a program brought in by the Department of Transportation after the deregulation in 1978 to ensure that smaller communities continue to be served by at least minimal airline service. Our air service is subsidized by the FAA and provided by Sky West/United Airlines, a commuter airline out of Denver. We have two flights right now: one in the morning that takes off from here and then a return flight at 2:30 in the afternoon that comes in from Denver and then goes right back out again. And then usually at about 8 o’clock a plane comes back and delivers passengers to Laramie. The crew stays for the night and will fly out again the next morning.”

That commuter service has been the focus of operations up until this point – the recent expansions that open other possibilities all began with a new terminal project that is, from a customer point of view, now complete. “Our original terminal building was around 6,000 square feet,” Stamp explains, “and after 9/11 the TSA began bringing in more and more equipment for security purposes. Basically, we altered our old terminal to the point where we ran out of room. It was then that we began the process of working with Jviation Engineering and Sampson construction to build a new 14,000 square foot terminal for commercial air traffic. But, before we even started that we put $20 million into taxiways, fuel tanks, new parking, and other infrastructure upgrades. Next, we built a new FBO building which was doing double duty as the terminal and general aviation hub. But now, we have moved all the commercial aviation over to the new terminal allowing us to have a fabulous commercial terminal and a relatively new FBO general aviation building as well.”

The terminal can accommodate gatherings and meetings, and there is space now in the FBO building to create a deluxe pilots’ lounge. Terrell explains, “It makes a beautiful partnership with the two buildings right next to each other. We are also able to provide efficient fueling for both, and we also have room for more hangars right in the same area. It is great because as quickly as we develop growth opportunities, we are finding more and more businesses looking for space. Having direct access to the runway is a big draw. We have also recently hired full-time front desk staff and that makes us more accessible and certainly more helpful to those using the facility.” 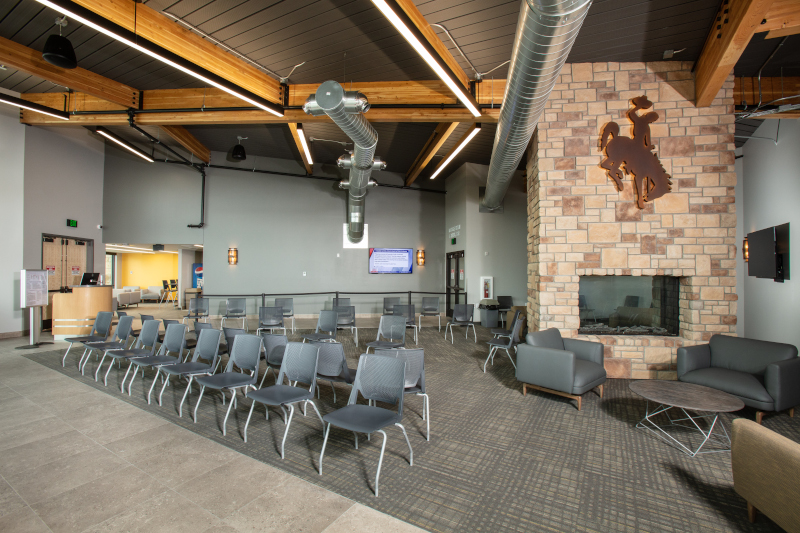 The expansion does not stop there, however. Terrell has begun the work of creating a Master Plan to map out the next 20 years. Working with Jviation – a planning, design, architecture, and construction administration firm that focuses solely on aviation-related projects – they are looking at what else might be possible in the future. “Jviation have been the engineer of record for Laramie Regional for some time,” says Terrell. “They provide us with great service and are helping us get things ready for growth. They are doing everything from the design of drainage systems, to parking lot development, to building oversight, and construction. So when we go to build new hangars, they’ll be involved in the engineering side of doing that as well. It is a great partnership.”

There are other facets to the Laramie operation, too, including occasional military use. Most Air Force traffic flies out of Cheyenne, but helicopters have been known to refuel at Laramie. The University of Wyoming also operates the King Air Atmospheric Research Aircraft out of the airport and collects data by weather balloon and specialized aircraft. The University also flies their basketball and football teams out of the airport.

Then there is the business park side of things. Laramie has both raw land ready for development and land which has already been prepared. Presently, there are 240 acres set aside for business and 125 acres already have water and sewer. The park currently has one commercial building and they are looking for more. The focus will be on aviation-related businesses, but they are open to development on any front. “We want to look at supporting the community, as well,” says Stamp. “It would be great to have some engine or airplane repair shops open up, but any partnership that benefits Laramie benefits us as well.”

It is a broad vision of a better future – and Terrell admits that the new Master Plan may go a long way in terms of narrowing the focus, but the truth is that no matter which way you look, growth is on the horizon.

“We are excited about the next few years,” says Stamp. “We believe Laramie has a bright future economically and socially. We are a university community that is growing in many ways and we would love to see more and more commuter traffic happening, working with the university and Sky West.”

“But,” adds Terrell, “that is just the one side of our multi-generational approach, as you could call it. We are also excited to be working with local businesses and pilots. This is a pivotal moment for this airport where we have the luxury of looking at growth. Our FBO is helping us to change our focus and cater more directly to this side of the business. There are just so many possibilities. I envision an excellent partnership with the surrounding community with our hunting and guiding, our outdoor recreation, our businesses, the City of Laramie, and the University of Wyoming. I envision us really linking in with all these services with wonderful opportunities. Our new terminal is designed to help put Laramie first and we want to build not only the airport but the community as well.”

What: A general aviation airport actively planning for growth

Sampson Construction has been a leader in commercial construction for nearly 70 years. Our values and passion guide our priorities and our actions, inspiring us to deliver the best possible construction services to our clients. Our aim is to be a long-term, trusted partner, not a vendor, in the communities in which we live and work.

Established in 1952, we have offices in Cheyenne, Wyoming; Johnstown, Colorado; and Kearney, Lincoln, and Omaha in Nebraska. Building enduring structures that help people and communities develop and prosper is a legacy of our company and our people. Sampson Construction has served as a trusted partner with business owners, developers and communities across the country. Sampson Construction is proud to have recently completed the terminal expansion at Laramie Regional Airport. A project that began as a remodel and addition and became a total demo and rebuild.

We continue to be a leader by providing the latest industry advancements to enhance our services, by supporting our in-house team of experts, and by holding to a vision that our greatest achievements are both behind us and still ahead of us. Regardless of the project, budget, or scale, we believe in making each project our best project.