The City of El Paso Texas has always been tied into transportation. From the Camino Real (Royal Road) that connected Mexico City and Santa Fe, to the Butterfield Trail, a major stagecoach passage from St. Louis to San Francisco, to being the gateway airport for space tourism, Blue Origin and Spaceport America, El Paso has been at the heart of it all.

This history is no less interesting when we turn to aviation. Back in September of 1927, it was American aviator legend Charles Lindbergh himself who encouraged the City to build an airfield. A year later, with the help of the El Paso Aero Club, El Paso’s municipal airport was born. For the past 93 years, the airport has been a leader at the forefront of development. In 1968, El Paso became home to the nation’s first 130-foot air traffic control tower, and in 2000, the air traffic control tower became the first in the nation to operate with a STARS radar system – a system that upgrades the air traffic control system and enhances the safety of the flying public.

El Paso International Airport is also the site of NASA’s Johnson Space Center Forward Operating Location, which was a training center for astronauts during the Shuttle missions. Today, the Forward Operating Location serves as a maintenance facility for NASA’s T-38 trainer jet aircraft and home of the Super Guppy Transport aircraft, the last remaining operational aircraft of its kind.

“El Paso is the gateway to Western Texas, the Southwestern United States, and Northern Mexico,” says Sam Rodriguez, El Paso’s Aviation Director & Chief Operations and Transportation Officer. “With more than 2.5 million people in this area, we are a border city that helps form the world’s biggest border Metroplex when combined with Ciudad Juarez in Mexico.” 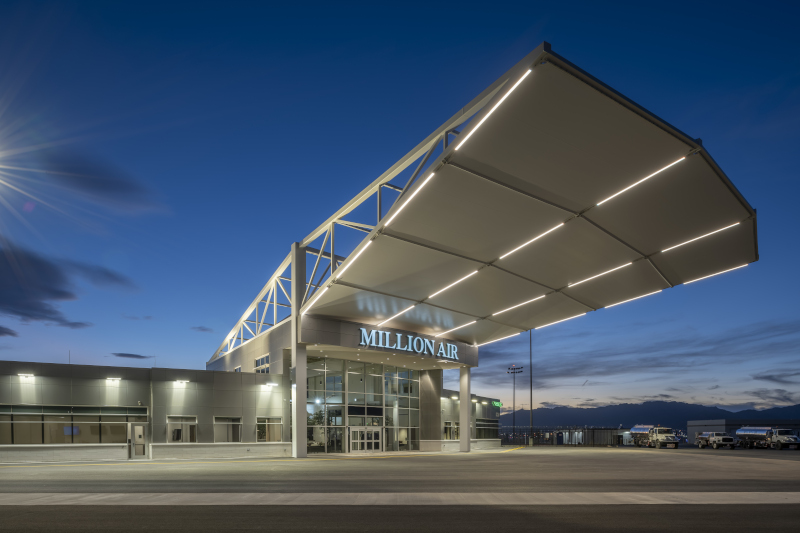 The El Paso International Airport service area covers a 200-mile circumference, making it a critical and strategic transportation hub for business, leisure, and military travel. The airport is close to major national parks and monuments and serves as the commercial gateway for Fort Bliss and the White Sands Missile Range.

“From an economic development standpoint, El Paso is home to one of the busiest ports for import and export between the U.S. and Mexico,” says Rodriguez. “More than $100 billion worth of trade goes through our region’s ports, which accounts for almost 20 percent of the trade between the US and Mexico. Our region is home to more than 360 manufacturing operations with over 75 Fortune 500 companies. El Paso is one of the top five manufacturing hubs in terms of employment in North America.   Manufacturing & Logistics is a key focus of industry here on both sides of the border taking advantage of the airport’s free trade zones.”

By sheer size alone, El Paso International is an engine for economic growth and prosperity. The airport covers 6,670 acres and has three runways: the main runway, 4/22, is 12,020 feet and is equipped with ILS and GPS instrumentation; 8R/26L runs 9,025 feet; while 8L/26R is 5,499 feet long and serves the general aviation population. The terminal has 15 gates and a variety of first-class amenities. Pre-pandemic there was a traffic flow of 3.5 million passengers. 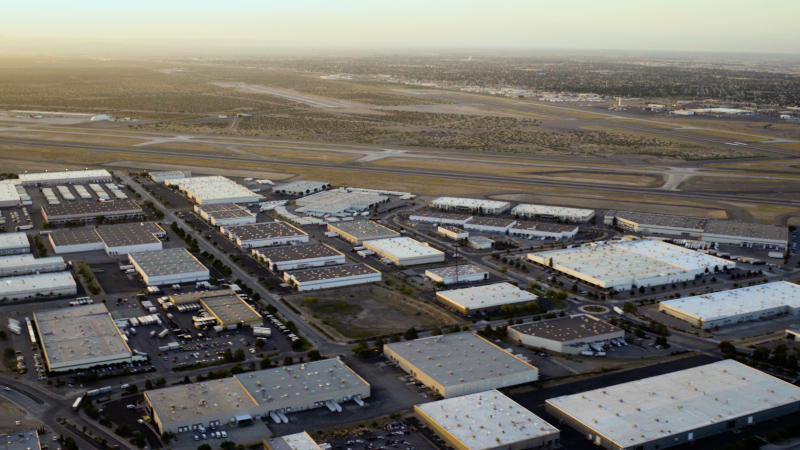 “Over the past five years we’ve added four new airlines—Allegiant, Frontier, Alaska and Boutique,” says Rodriguez. “This opened up additional destinations to include Orlando, San Diego, Seattle, and Charlotte N.C. The flight to Charlotte is a new destination that we did not have before the pandemic, and it considerably enhances our region’s access to the east coast, Europe, and the Caribbean. El Paso has exceeded the national average when it comes to recovery of passengers compared to 2019. Our recovery is well underway with significantly more traffic over the past four months leading up to a very busy summer. ”

The airport’s new flight options are being complemented by recent multi-million dollar improvements designed to enhance the customer experience. Terry Sharpe, El Paso Assistant Director of Development says, “We’ve invested in a lot of upgrades in the last few years. We replaced all 15 jet bridges at the terminal in 2018. We opened a $30 million state-of-the-art checked baggage inspection system, which will be able to handle our capacity for at least the next 20 years. In the concourses, we expanded restrooms, expanded food and beverage facilities, added nursing rooms and family washrooms, improved the LED lighting, and even set up a playground and pet relief station in concourse B. We are also undergoing a FIDS (Flight Information Display System) upgrade and, by the end of the year, we will have upgraded our public address system. The landscaping and front entrance of the terminal has also been redone for a cost of $7 million.”

El Paso International is unique in that more than 55 percent of its operating budget is covered by revenue from non-aviation sources. Land leases and concession agreements provide the airport with sustainable revenue throughout the year. The airport runs the Butterfield Industrial Park, which spans across more than 500 acres. It also owns two golf courses, and on the southern end is rebranding a second business park as the Boeing Business Park.

“We still have more than 1700 acres of prime property ready for development,” Rodriguez points out. “Much of it is slated for mixed-use and is adjacent to Fort Bliss land where the military is about to open a brand new $1.5 billion hospital. We are also about to break ground on the Marmaxx facility – a $150 million distribution center for Marmaxx, the parent company for TJ Maxx, Marshalls, and HomeSense. Through this partnership, we are developing over 200 acres of land and bringing in 950 jobs. In addition to those opportunities, the related 50-year lease agreement we negotiated should bring in over $48 million of revenue to the airport.”

Cargo is another major element of the airport business. FedEx has doubled its capacity at the airport in the last couple of years, as has UPS. DHL is looking to triple the size of their cargo under roof operations out of El Paso.

On the general aviation side, the airport has set aside over 1,000 acres for expansion. It has two fixed-based operators (FBOs), Atlantic and Million Air, who offer full-service operations. “Million Air is a locally owned FBO that we just brought on board,” says Sharpe. “It is an investment of a local businessman, Paul Foster, who already had two FBOs in New Mexico in his portfolio. His commitment to El Paso is huge and he is running a five-star enterprise, which complements Atlantic’s operations. This is giving our airport a lot of cachet in the business and corporate aviation community. We want to continue to lead the charge when it comes to the future of aviation. Down the road, I would like to get our technicians certified to work on electric vehicles, as well as autonomous planes.”

El Paso has also spent a great deal of effort on a new UAS detection (drone) program, which is perhaps the most advanced drone detection system in the United States. “We teamed up with the University of Texas at El Paso (UTEP) when we started hearing about how drone traffic can interfere with air traffic,” explains Tony Nevarez, Assistant Director of Operations & Security at El Paso International. “Most of the companies offering drone detection were overpromising or underperforming. So, we developed our own system and it has given us far greater reach and the ability to share information with law enforcement, as well as search and rescue teams. The other thing UTEP did was to train all our personnel as UAS Part 107 pilots, which gives us a unique ability to understand and operate our system. It has also been very effective for photography and safety inspections at the airport.”

This past year has seen an enormous amount of work done in terms of public safety to battle COVID-19. Again adopting the newest and best technology, El Paso installed ultraviolet light to disinfect large and high traffic areas. The technology is on handrails at escalators, break rooms and the customs facility. To supplement this public safety measure, the airport uses electrostatic disinfecting machines to disinfect large surface areas.

While the safety of travelers and visitors is a priority for the airport, it has also invested in eco-friendly upgrades. In the past five years, the airport team has worked very hard at energy-saving projects to reduce the airport’s carbon footprint through such efforts as more efficient HVAC systems.

“This is a pretty exciting time in El Paso,” concludes Rodriguez. “There are so many opportunities available for developers in the region; we will be focused on expansion in land development.  We have perfect weather and a wonderful community. This is one of the hidden gems from an aviation industry perspective. We also have an aggressive capital improvement plan that includes airside projects, terminal projects, and partnerships for industrial and commercial development. We want to be able to use technology in a way that sets us apart from an infrastructure standpoint to maximize everything that will be developed in the future. We are set to invest almost $70 million in our airfield, which will make us a very attractive choice on every front – general aviation, commercial, industrial, and military. We want to stand front and center, ready for all the opportunities that are out there.”

ELS has developed a trusted reputation in the O&M industry by providing safety focused and quality driven operations, maintenance, and repair programs throughout North America.

No company knows the intricacies of airport operations better than ELS and we stand ready to support our customers with whatever issues they face.