Business View Magazine interviews representatives from Chowchilla, California, as part of our focus on best practices of American towns and cities.

Chowchilla is a city of 18,000 in Madera County, California, incorporated in 1923. The name is presumably derived from the Chaushila tribe of the Yokut Indian nation, though spellings vary. It was almost named “Lone Oak,” after the single tree that stood near the airstrip in those early days.

Though Chowchilla lies in the center of California, and beside the main lines of the Southern Pacific Railroad, it was not the outgrowth of a geographic or economic need. It was, in fact, the result of the thinking and planning of one man, Orlando Alison Robertson, who was most responsible for the creation of the city.

Having bought large tracts of land between Minnesota and California along the rail lines, O. A. Robertson organized the United States Farm Land Company in 1910, to jump start development in California’s San Joaquin Valley by transforming the land into “prosperous farms owned by happy people.” Against the advice of financial counselors, he put all his money into the Chowchilla project, purchasing the Chowchilla Ranch from the California Pastoral and Agricultural Company in 1912. Half the ranch was divided into tracts for sale to farmers, with the northeast corner set aside for the site of the town to be known as Chowchilla, currently 11 square miles.

Robertson’s ambitious plans were soon carried out. Surveys were completed and maps were made. Streets in the town site and about 300 miles of country roads were opened. This included the 12-mile, palm-tree-lined Robertson Boulevard (100-feet wide so a team of horses could comfortably turn around; now still tree-lined and listed as a scenic highway on the state register). A large hotel and office buildings were erected. The first post office was opened. Soon, a town water system was put into operation and streetlights were put up. Later, some 12 miles of track were laid in connection with the Southern Pacific Line, to aid settlers and expedite the new colonizing efforts. (Now abandoned, the Chowchilla Pacific Railroad served the area for 40 years as one of the shortest lines in the nation.)

In 1917, Robertson and famed Chicago meat packer, Louis Swift, purchased the Western Meat Ranch, roughly 40,000 acres of adjoining property, a cattle and farming operation under different managements since it was purchased. In 1919, Robertson purchased 26,000 acres of the Old Bliss Ranch, again, subdivided and sold in small tracts.

Robertson had much of his money tied up in extensive land speculation ventures, and when the country began to experience the recession and subsequent Great Depression of the late 1920s and early ‘30s, he became more and more pressed for funds. When Robertson passed away in 1933, he had lost his vast fortune and died practically penniless. Yet, Chowchilla stands as the legacy of a farsighted real estate promoter who saw the future and agricultural productivity of the Valley. 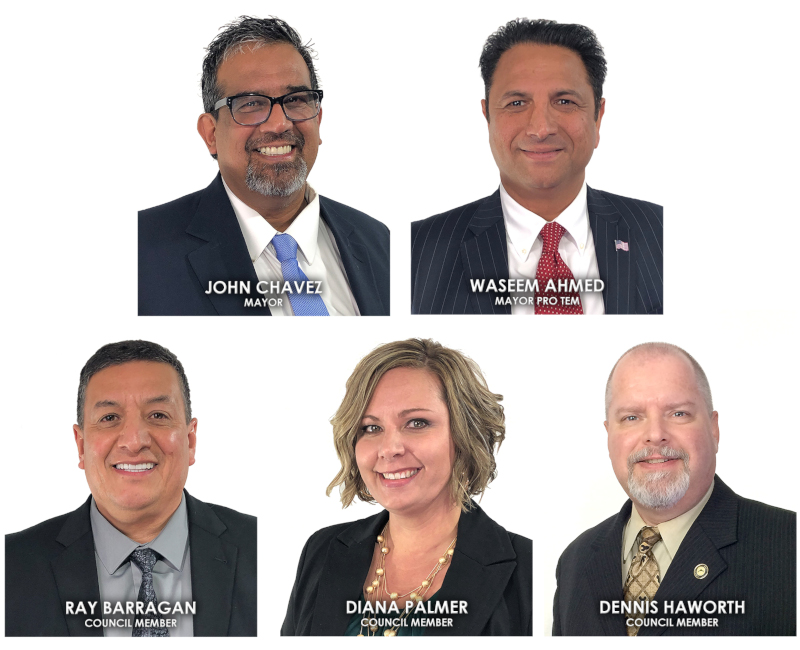 “Most recently, we issued multiple bonds for infrastructure projects, such as solar arrays at multiple locations,” Pruett begins. “The biggest is at our wastewater treatment plant, part of it directly associated with the wastewater treatment plant, and the rest of that array going back onto the grid to reduce costs for all our city facilities and all of our water wells. At our corporate yard, we put a carport up and put solar on the carport to power a new well and a 750,000-gallon water tank and booster stations there. Then, we have a second location for another 750,000-gallon water tank by our industrial area that also has a booster pump station and pressure sustaining valves, due to the geography of our city, as one side of the 99 Freeway is higher than the other side.” In total, the solar installed will offset approximately 80% of all the energy used city-wide.

“Also, as part of this project, we were not fully water-metered in the city,” he continues. “We needed about 2,000 meters, so now every connection is water-metered. We had an interest-free loan from the state Water Resources Control Board to do that project. We did some other energy efficiency improvements: we replaced all our HVAC units on all our public facility buildings with new energy-efficient HVACs. We swapped out all our streetlights for LED street lights, and all our public facility buildings got LED lights.

“The bond issues were taxable bonds, that is, part of them were taxable bonds. There were three series of bonds for each one, for a total of nine. Three for the general fund, three for the water, three for the wastewater. The first series, which was the biggest chunk issued, were CREB bonds, or Clean Renewable Energy Bonds – bonds the federal government helps to subsidize; taxable bonds where the federal government gives us a subsidy to reduce our debt service payment for putting in clean, renewable energy. For the general fund, we had a bond issue of $3.6 million. That’s the total cost for the general fund. We have a CREB subsidy over the life of the repayment of the bond that’s going to give us $1.3 million. So, with the general fund as an example, of the 3.6 million that we obviously have to pay back over 30 years, we will get back 1.3 million from the federal government, with a similar set up for the water and wastewater bonds. 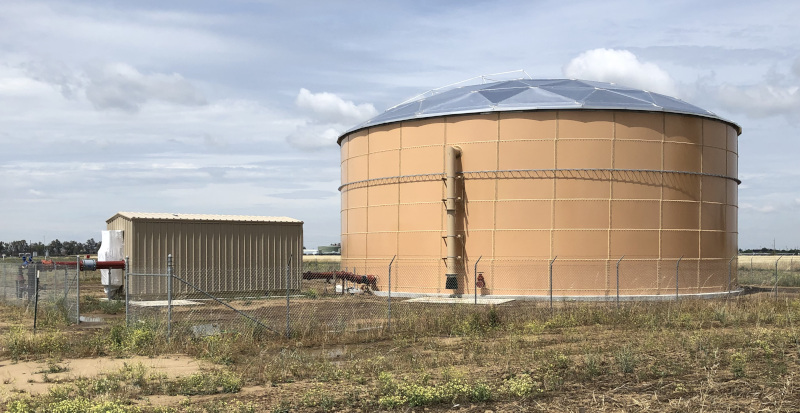 “Each one of these projects is stand-alone, and analyzed on its own, and each one generates savings on top. We take the savings we get from not having to pay our electric bill to Pacific Gas and Electric and use that money to pay our debt service. The debt service is the bond issue we used to put in all the new infrastructure. On top of being able to pay back our debt service, there’s the additional savings by doing solar for each one of the funds. The general fund comes to an extra $1.4 million in savings, the wastewater $5.1 million in savings, and the water $3.8 million in savings. After we pay off all of our debt service over the course of 30 years, those are the estimated additional savings we would get, based off a 5 percent escalator, annually, for increasing energy costs.

“The upshot, when we looked at it, was that no money came out of the city’s pocket! All we did was issue bonds. Instead of paying PG&E, now, we’re paying our debt service, and we get extra savings. So for all this infrastructure improvement, nothing came out of the citizens’ pockets. We didn’t have to reduce any programs or anything like that, and no increase in taxes; it was all just savings from implementing  solar, as the reduction in energy costs are considered savings. And these savings used to make debt service payments are guaranteed. If the solar systems do not produce the savings, the contractor, Johnson Control, Inc. (JCI), writes us a check to cover the difference. This guarantees our debt service will be made.”

Chowchilla’s population of 18,000 has been somewhat stagnant over the past decade, but the last couple years the city has seen some growth. “We did have a small development project that built out,” Pruett notes. “We have a few projects on the table, moving forward. One is a very fairly large project called the Rancho Calera project. We have another project, called Sessions, with around 200 units, and a project called Legacy in the works. So we definitely are seeing some steam picking up.”

The Rancho Calera project is a master-planned community in the City of Chowchilla. The project site is 576 acres and consists of 2,042 single-family homes, 35 acres of commercial property, a one-acre safety facility, and 77 acres of park/open space. Project amenities feature an elaborate system of parks and walking trials with connections to many parts of the community. Other community elements include a number of water features, lakes, sports and neighborhood parks, as well as an elementary school, middle school, and community center. 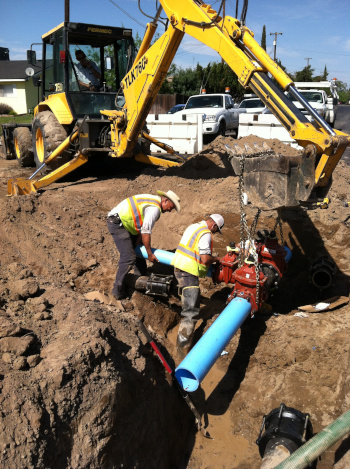 Chowchilla’s tax base is mostly residential. “We are working on the rooftops to get the retail over here,” Pruett explains. “The problem is there’s like a 20,000 population number that most bigger industries and retailers like to see before they want to go there, and we’re a little bit shy of that number. But we’re still working to get some of the bigger names to come in here. Right now we have a Panda Express that’s building to open in August. We do have a big company here: CertainTeed Corporation has been here for quite some time. They’re probably our biggest number employer, specializing in insulation materials manufacturing. And we are seeing a lot more interest. We are very centrally located in California, right at the intersection of two major freeways, the 99 and the 152. To get to the Bay Area you can take the 152. To get to Sacramento to the north, you can take the 99. We have a great logistical location and it’s starting to be utilized more and more.”

In order to focus on Chowchilla’s downtown area, Pruett says the city recently completed a new zoning ordinance: “We just adopted a revised downtown design guidelines to try to get more of an aesthetic appeal that we’re looking for, to get businesses in uniformity to have a more attractive look to the downtown, instead of just everybody doing their own thing. For us, the downtown is the hub. It’s the center point of our city.

“We have a unique issue in that our downtown is a highway that is owned by the state – Highway 233, also called Robertson Boulevard. That is our downtown. One street north and one street south of that is our entire downtown for so many blocks. But the main part of it is owned by Caltrans (California Department of Transportation), so there are some restrictions and fights that we have with the state as to what we could do and what not, and it’s an obstacle to overcome. For example, they won’t let us put a Christmas tree up; they won’t let us put banners across the street. So, there are a lot of things they won’t let us do when we try to get the downtown going.

In considering the most important aspects of living in Chowchilla, Pruett offers the following: “We are a very close-knit community. We have excellent public safety numbers; our crime rates are low; it’s a small town that really supports each other and its police force, so you could feel safe. Also, being centrally located. We are a couple of hours away from the beach and a couple of hours away from camping in the mountains. You can go snow skiing in the winter and water skiing in the summer. When you are centrally-located, it’s easy to get to just about anything you would like to get to. In sum, I’d say we embrace a rich heritage of small town appeal as a diverse, family-oriented community with quiet and attractive neighborhoods, a growing downtown vitality, and vibrant local activities, where community is not just a word, but a way of life.”

WHERE: Madera County in central California