City on the grow

Established in 1957, the city of Bellflower is a gem in the densely populated region of southeast Los Angeles County, California. Originally a small farming community, Bellflower is now a thriving city with more than 78,000 residents. There are varying ideas about how the town, once named Firth, came to be known as Bellflower. One controversial story suggests that several influential citizens registered the name without consulting the people of the town, while another says it was drawn from a hat. More likely, the name was connected to the Bellefleur apples, grown in the orchard of early settler William Gregory.

With the mission statement, “To protect and enrich the quality of life to make Bellflower an excellent place to live, work, and play,” the city is continuously working to build and develop itself. Of note, the recently completed Regional Transit Center – a 278-stall parking structure in the downtown core. With its white façade and traditional architecture, the new building fits naturally into its surroundings. Jim DellaLonga, Director of Economic Development shares, “It was completed, and then the ribbon cutting occurred during the onslaught of COVID-19. It was very unusual to host a socially distant ribbon cutting. We opened it with great anticipation, and then everything was closed. Once things get back to normal, we know it’s going to be well used. We are really excited. It’s a beautiful addition to downtown.”

Downtown revitalization is ongoing in Bellflower. One recent addition is the SteelCraft Bellflower project, which was completed in June of 2019. Built out of repurposed shipping containers, the goal of the SteelCraft developer was to create a place for craft eateries and the community to come together.  With a variety of food and drink offerings and a communal dining space, the unique building is a foodie’s dream that draws both residents and visitors to the downtown core.

Howard CDM, the development company responsible for SteelCraft, is actively working on another project in Bellflower. This new endeavor involves repurposing a three-story 1950’s era JC Penney building, which was destined for demolition. Named “The Exchange”, the top floor will be home to the Howard CDM headquarters. The second floor will offer a shared office environment, while a maker space and makers mall will fill the main floor, along with possibility of a distillery, microbrewery, and bakery.

Scheduled to open by the end of 2020, this building will carry a WELL Certificate, a unique certification awarded for meeting environmentally responsible building standards. The building’s design includes features such as natural light and open air spaces. Bellflower Mayor, Juan Garza, explains, “It’s pretty unique, and exclusive. It incorporates environmentally-friendly components, but also a holistic component, meaning it allows for and encourages employees themselves to also live a healthy lifestyle. It carves out spaces for bicycles, so people are encouraged to ride their bicycles to work. On top of that, the lighting components are very distinct, whereas they’re using solar panels incorporated with natural sunlight. This lighting concept is a win for the environment, but also does something positive for the human spirit itself, so that you have a feel-good ambience to work in within the building. It is the first WELL Certified project in Bellflower, and the first one that we know of within a 10-mile radius from here. We are really proud of the fact that this building, and this project, is going to be something unique for our region.”

The Stand-Up Comedy Club, an upscale establishment, is ready and waiting to open in Bellflower. “If it weren’t for COVID, it would probably be open already,” says DellaLonga. “But because of slowdowns with contractors and restrictions, they can’t get people in right now. L.A. County Public Health keeps business operations limited due to the COVID case count, so they are being very cautious as they open things up.” The club is an exciting opportunity that brings diversity to the city’s economic portfolio and helps define Bellflower as an entertainment destination. Mayor Garza shares, “The nearest comedy club is in Long Beach, which is a good six miles away. Aside from that, the nearest ones are probably in Pasadena and Hollywood – at least 20 miles away from us. The fact that Bellflower is having this type of use, and is open to it, is really a good reflection of our evolution, of our renaissance. I want to stress what the Stand-Up Comedy Club really represents for us here. It’s not just a comedy club, it’s the fact that we have a business community in the entertainment sector seeing us as a good solid partner and location to invest in. They feel that everything around us will be enough to sustain that economic model for them.” 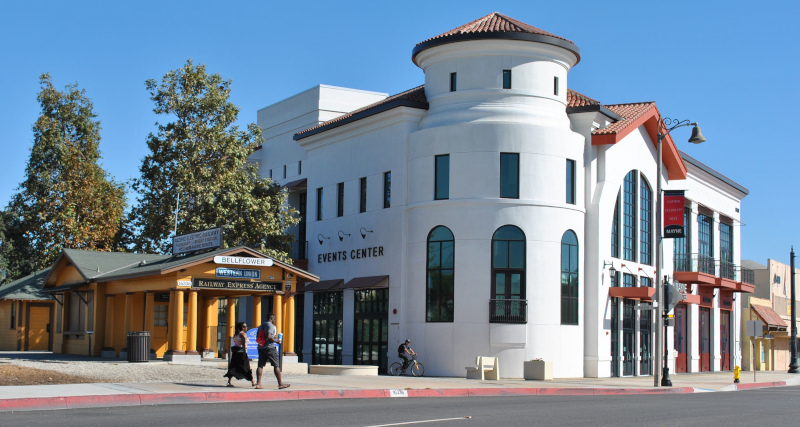 Another up and coming project, the Edgeway Downtown Bellflower, will provide a mixed-use, transit-oriented development. The Edgeway will include 91 residential units, 4750 square feet of retail and restaurants, and a four-screen theater. According to DellaLonga, “The theater brand is called Laemmle.  It is a very popular, small art house theater.” This project will be developed by Serrano Development Group, with construction expected to begin in 2021. Located directly across from the city’s new parking structure, Edgeway will also be within walking distance of a new train station and future light rail transit. Still in the planning stages, the new transit will be an exciting addition to the city. “Los Angeles County Metropolitan Transit Authority is the lead agency with the light rail project,” says DellaLonga, “and they’re currently in the environmental impact review stage. They anticipate starting construction in the next two to three years. They would like to have that light rail completed by 2028 to coincide with the 2028 Summer Olympics.”

The Brew Refinery will be another draw for visitors and residents to downtown Bellflower. Currently in the planning stage, this three-floor building will be complete with a microbrewery, a full service restaurant and a cocktail lounge.  As an infill development, the project will have a smaller footprint, growing vertically on a 7500 square foot lot. Expected to break ground in early 2021, this establishment will offer a unique experience, further adding to the growing entertainment atmosphere in the city.

On the corner of Bellflower Boulevard, on the outskirts of the downtown, another noteworthy development is underway.  Belle Fleur Center is described by Azure Development as “14,500 NEW square feet of restaurant, retail, and lush landscaping.” The project includes a food hall of more than 6000 square feet, with seven specialty tenants and a food incubator vibe. “It is not in the downtown proper, but it’s just down the street. We are really excited about that project as it’s really going to infuse some life into an area of the city that needs some revitalization,” says DellaLonga.

With housing development happening across the city, Bellflower is proud of the recently constructed New Hope Temporary Shelter. The city worked with Howard CDM, bringing the homeless shelter from planning to completion in less than 5 months. Mayor Garza reports, “Two years ago, we did a community survey that showed us that not only our residents, but our business community was really highly concerned about our homelessness challenge here in our city. We are not unique in experiencing that issue but, nonetheless, we took it to heart at city leadership to address the issue and created New Hope which is a temporary homeless shelter. The impetus is, once we create this, we’re able to transport our homeless individuals off the street, provide stable housing, and offer specialized services to help them achieve a self-sufficient lifestyle. At the same time, it allows us to improve our business corridors, our residential areas, and our park space where a lot of homeless would congregate. We have essentially shifted, in a very methodical and peaceful way, our homeless population into a facility that is dedicated toward helping them, while at the same time restoring that quality of life in our overall general community.”

The city is also helping members of the community who are struggling due to COVID-19.  Business grant programs and residential rental assistance is available through various funding, including funds provided through the CARES Act. Emergency assistance is also available for mortgage and utility payments. DellaLonga notes, “Our Community Economic Development is a holistic field in our minds, in which we try to help out all. Helping the businesses is one piece, but it’s also helping the rest of the community as well. It’s kind of a cycle to us in this way.”

With a combination of community mindedness and innovation, the city of Bellflower continues to look to the future. “We are getting a lot of companies that are having conversations about opportunities for development and for business here in our city,” says Mayor Garza. “Despite COVID and the tremendous effect that’s had in every community, there’s still a sense of trust and faith that our city is going in the right direction. We still have companies of prominence coming in here and wanting to have a conversation about opportunities. That is really encouraging.” With so many exciting projects ahead, Bellflower certainly has a bright future to look forward to, as they continue to grow and thrive.

What: A progressive community; population 78,000