Auburndale, Florida was founded in the 1880s when Louis McLain, a civil engineer was hired to build a section of Henry B. Plant’s new South Florida Railroad in Polk County. At the same time, Frank Fuller and his father, Reuben, from Chicago, were starting a new community they called Sanitaria along the new set of tracks. What the Fullers needed to make their community successful was a railroad depot, but, as one version of history recounts, the Railroad asked Frank Fuller to donate some land for the depot, and when he refused, decided to build it one mile away, closer to McLain’s land holdings. Sanitaria soon failed and its buildings were torn down and reconstructed near the new depot. The new town was dubbed Auburndale, after the town in Massachusetts.

Today, the small city of 17,000 is part of the Lakeland-Winter Haven Metropolitan Statistical Area, located 40 miles northeast of Tampa and 60 miles southwest of Orlando. The city has a total area of 9.3 square miles, of which 44 percent is made up of lakes. Auburndale is mainly a residential community with a focus on providing a variety of sports activities in Central Florida – it is home to the Lake Myrtle Sports Complex, which houses the Florida Youth Soccer Association, the USA Waterski and Wake Sports Foundation, Polk County Sports Marketing, and the Pan-American Lacrosse Association. Auburndale is also the home of the Baynard House Museum, which is included on the National Register of Historic places, the Auburndale Speedway, and the Auburndale TECO trail for cyclists, joggers, and inline skaters.

Amy Palmer is Director of Auburndale’s Community Development Department, which provides strategies to enhance development, revitalization, and preservation of the city’s character, neighborhoods, and natural environment. As such, it handles the City’s planning and zoning services, provides assistance to customers with land development regulation questions, reviews site development plans, helps local businesses, and recruits new ones. In carrying out its mission, it works closely with Polk County’s economic development organization, the Central Florida Development Council (CFDC).

Palmer talks about some of the ongoing projects under her purview. “The big picture includes a new Amazon Distribution Center,” she begins. “I believe it’s Polk County’s fifth and Auburndale’s first. Prologis is the developer of the 1.1 million-sq.-ft. building, which will house larger household items – furniture, bicycles, kayaks – those types of things. It should be open within the next few months and will create about 500 jobs. My department has been very busy doing the inspections and plan review. The whole development of that building was ongoing for 18-24 months. So, we’re glad to be able to see that almost open.”

“The other big project taking place in Auburndale, right now, is the SunTrax facility,” Palmer continues. “It’s a project of the Florida Department of Transportation (FDOT) and Florida Turnpike Enterprise (FTE), in partnership with Florida Polytechnic University, which is a mile down the road from the track, as well as the other universities in the State of Florida. Florida Turnpike needed a facility for testing all of their tolling equipment and software. Right now, their tests are being done, pretty much, on the open road. They wanted a closed facility and they realized if they developed a closed facility for testing tolling equipment, it would present a perfect opportunity for also testing driverless vehicles and driverless technology.” 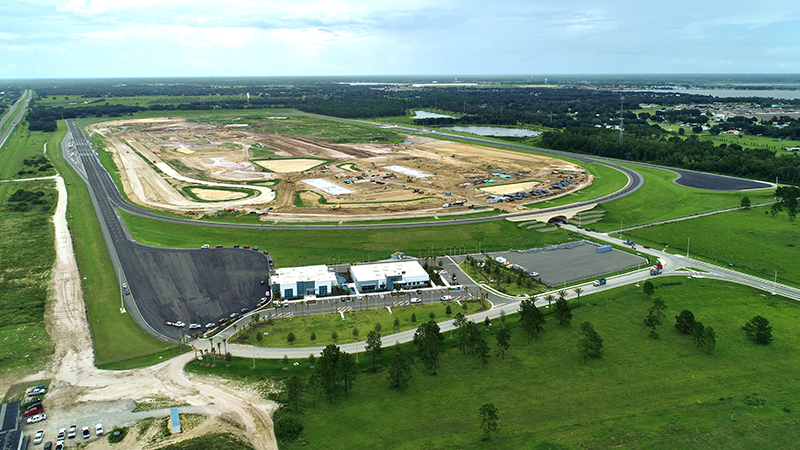 SunTrax is situated on 475 acres and is composed of a 2.25-mile-long oval test track around a 200-acre infield. The multi-lane track will make it the only high-speed, Connected and Autonomous vehicle (CAV) testing facility in the southeastern United States. In the infield, there will be multiple simulated transportation environments, including:

The intent is to maximize the site’s flexibility and variability, providing as many challenging environments as possible for the testing of connected and autonomous vehicles and other emerging technologies. The entire site will be a connected environment for the testing of vehicle-to-infrastructure (V2I), vehicle-to-vehicle (V2V), and vehicle-to-anything (V2X) communications. SunTrax will also have a unique tolls technology testing component, with four all-electronic toll gantries and supporting infrastructure being constructed. FTE will conduct its tolls testing on the site, both on existing hardware and software systems and future generations of tolling equipment and payment systems.

Construction on the oval test track began in 2017, and was completed in May 2019. Construction of the infield began in January 2020, and is expected to conclude in late 2021. “This facility is a pretty big deal, not only for Florida, but for the southeast United States, as that technology grabs hold,” Palmer states. “And it’s a pretty exciting project for Auburndale.”

The SunTrax site is surrounded by several hundred acres of developable property in an area that is actively pursuing growth from high tech industries. “The initiative that we’re working on is in partnership with the CFDC, Polk County, and the City of Lakeland,” Palmer explains. “It’s called the Innovation District. SunTrax is one of the anchor tenants; Florida Polytechnic is another anchor tenant. All of the land in between is what we’re hoping will fill in with technology companies and the live, work, play environments that technology companies want to locate in. All four organizations have been working together and studying the land-use plans and we put together a vision document to identify what the Innovation District could look like. That’s a planning initiative that’s still in its infancy and we’re trying to figure out the direction in which we need to head.”

Another planning initiative undertaken by the City concerns what is known as the Lakes District, which comprises a number of properties on the east side of Auburndale. “We did some public participation efforts last year and came up with a vision for the Lakes District that identified locations for residential, for village centers, and for additional parks and trails,” Palmer recounts. “The area is made up primarily of orange groves owned by two large landowners. Those landowners actually helped fund the vision document that was created last year with the City. We split the cost in hiring Kimley-Horn, our consultant, and came up with this vision that identified what the needs were for the area.” 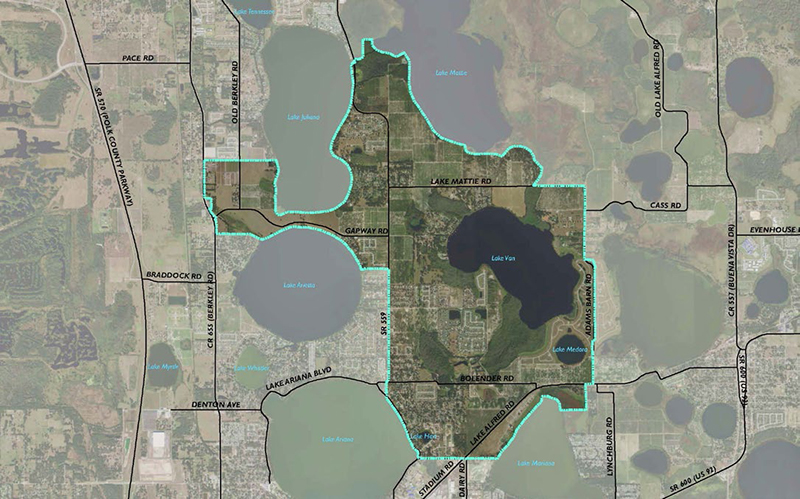 “That vision was adopted late 2019,” Palmer continues. “In March, we were to hold our next public workshop to move the process forward into land development regulations, to really identify what a village center would look like, what densities would be allowed in the residential areas, what requirements there would be from developers about trails and parks when they’re doing their planning, and what other things that the public had identified as needing.” Shutdowns due to COVID-19 led to the City canceling that meeting and in August they presented it as a virtual meeting through ZOOM. Along with the virtual meeting, the City of Auburndale and Kimley-Horn developed a survey for residents to take online that will gather opinions on how they would like to see the Lakes District vision implemented.

“The Lakes District is something that the City and its residents are very proud of,” she adds. “And I get calls, frequently, from people who hear rumors about commercial development or new residential projects coming along. They’re very concerned and tuned into how development occurs, which is a good thing. So, to have a Lakes District in Auburndale is pretty exciting and to have the property owners who helped contribute to that vision document is pretty special. I don’t think you’d find that in a lot of places.”

Meanwhile, Auburndale is also working to make the city even more attractive to the new generation of workers who often prefer to live in walkable, bikeable, downtown neighborhoods. Its Community Redevelopment Agency (CRA) has invested money in establishing “complete streets,” while simultaneously applying grant monies to projects that create multi-family residences on the second floor of downtown buildings. “Our zoning code is already set up for those things,” says Palmer. “In fact, we’re trying to develop that type of development, and we’re encouraging it through the use of our CRA. We’ve done two projects like that, already. They raise property values and increase the vibrancy of downtown. We also put Pilaklakaha Avenue, which was a four-lane runway, on a road diet, and there’s a trail on one side that connects to the TECO Auburndale Trail that goes to Polk City and all the way up through the Green Swamp, 30 miles, that will eventually connect to the Coast-to-Coast Connector.”

Luckily, Auburndale also has a central, downtown park that is surrounded by existing residential neighborhoods. “There’s just a lot of activity that takes place downtown because of the park,” Palmer notes. “You see kids riding their bikes to the park; you see families there in the morning. So, we’re trying to build on that activity and bring some other businesses in that would bring even more vibrant activity to the area.”

Added to these existing amenities are Auburndale’s low tax rate, and a pro-business and progressive city administration. Together, you have all necessary ingredients for a wonderful place in which to live, work, and play.

WHERE: Central Florida, between Tampa and Orlando

Proximity fosters accessibility and connectivity, the CFID is no exception. Perfectly positioned along the Interstate 4 High-Tech Corridor, the District cultivates an innovation ecosystem that supports technologies of the future. Attracting companies in advanced industries like health tech, information sciences, mobility and advanced manufacturing. Companies like Molekule, which is building its first U.S. manufacturing facility in Lakeland, are drawn to the area by available talent and expertise that will enrich their research and development hub.

Located in Polk County’s cost-effective business climate and within a region that boasts a land lease rate four times lower than the Orlando area, businesses are poised for success within the district. A friendly regulatory environment can advance testing and deployment of technologies supporting autonomous and unmanned systems.

Now is the time to invest in your future. What better place to do it than the Central Florida Innovation District?