Blessed with beautiful natural assets and steeped in history

Part of the Inner Coastal Plain region of North Carolina, an area covered in rich, sandy soil that provides some of the state’s best farmland, Bladen County’s serene landscape, and coveted rural qualities support growth in all the ways that matter. Nicknamed the ‘Mother of Counties’—a moniker earned because of the 55 other counties that have been carved from its landmass since 1734—modern-day Bladen is synonymous with heritage and has a rich history.

With several notable geographic features, including the Cape Fear, South, and Black Rivers, the Bladen Lakes State Forest, and some of the most well-preserved and intact Carolina Bays long-thought to be created by meteor strikes, Bladen County truly lives up to its motto ‘Mother Nature’s Playground’. “We have so many outdoor recreational assets here,” points out Terri Dennison, Executive Director of the Elizabethtown-White Lake Area Chamber of Commerce. “We have a beautiful, desirable climate. White Lake, which is one of our towns, has been a lake resort community here for over 100 years. There’s a white beach, of course, with beautiful, clear water. There’s swimming, boating, and jet skiing—all of the usual amenities that go along with lakeside living. We also have several hiking trails, with two state parks that are off the Carolina Bays. Those get a lot of hikers, kayakers, canoers, and fishermen.”

Each year, the Browns Creek Nature Park and Bike Trail, located in Elizabethtown, hosts several mountain biking races. Groups travel from Fayetteville, Raleigh, and Charlotte to tackle the park’s myriad climbs, switchbacks, and jumps, and its high-speed downhill action. The park also hosts the annual North Carolina Interscholastic Cycling League in a 650-participant event catering to a phenomenal youth program for 6th to 12th graders designed to promote a healthy and active lifestyle.

Although some of the townships, like Bladenboro, were undeniably devastated by the last two hurricanes to hit North Carolina, Bladen County Commissioner, Charles Ray Peterson, insists that the county’s rebuilding efforts will create enough ripples to embolden the local economy for years to come. “We’ve torn down an entire block of old buildings in Bladenboro and are in the process of building new retail shops,” he says. “We also have an organization called Boost the ‘Boro, which is a group of people in the 28320 ZIP code, that raises money to clean up and beautify the town. They’ve actually become the hosts of what we call the Beast Festival, which is happening this weekend. We’re talking about a two-day-long celebration of fun, live music, and great food to commemorate the infamous ‘Beast of Bladenboro’.” 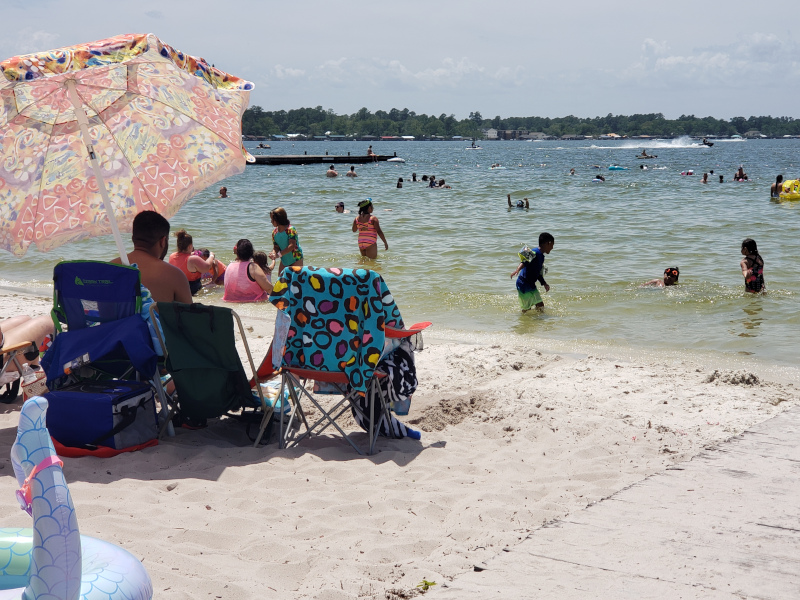 In the winter of ‘53, the township received national attention due to a string of mysterious animal killings in the area. For the last 15 years, the folks of Bladenboro have capitalized on that historic week that a vampiric beast held locals captive, with a creative community event that celebrates that lore.

“There’s been a valiant effort to restore our County’s towns, through these cultural events,” Peterson insists.

“But one of our biggest pushes to revitalize has been county-wide strategic planning,” says Chuck Heustess, Executive Director of the Bladen County Economic Development Commission. “Out of that initiative, a number of issues came up as areas to improve over the next decade. Growth was one of the stand-out elements—we’re in a cycle of declining population. We think a good percentage of that loss was due to an inadequate census count during Covid-19, and the on-the-ground follow-up not being done. But we don’t deny that we aren’t growing and so some of the endeavors we’ll pursue are going to involve housing.”

A new housing development is currently at a standstill in Bladen County, where contractors are providing new construction services on an as-needed basis. The County’s tentative solution to the shortage of small- and medium-scale residential settings is to secure grant funding to match local investment to get road, water, and sewer into planned residential areas, both to lower site improvement costs and incentivize local and regional developers to build local stimulus.

The County is also looking at people recruitment to fill vacancies in its industrial sector and is developing a recruitment strategy focusing on veterans.

“We’re very close to Fort Bragg and Camp Lejeune,” Peterson mentions. “We’d love to have those folks, as they exit the military, come and become members of our community. One of our approaches that have so far produced very good results has been to be the very best place we can be to start up and grow small manufacturing businesses. So now, we’re carrying that strategy into the small business, entrepreneur, and service sector, devising methods and programs to support the workforce, like daycare, plumbing, and electrical—those high-demand areas to help entrepreneurs startup in our community.”

To that end, Bladen County created a charitable rural development organization—the adorably named Bladen’s Bloomin’ Agri-Industrial Inc.—which is headquartered in Elizabethtown and offers a revolving loan program to assist small businesses in the manufacturing and agricultural sectors with low-interest, fixed-rate loans. “When the Strategic Plan was written and the need for small business development was identified, the County commissioners allocated an additional $200,000 to be used in small business loans,” Heustess says. “We’re just starting that program up right now and we’re still looking for applicants.”

“When you’re doing economic development, especially in a rural area, it takes a team,” adds Heustess. “There’s zero doubt about it.” 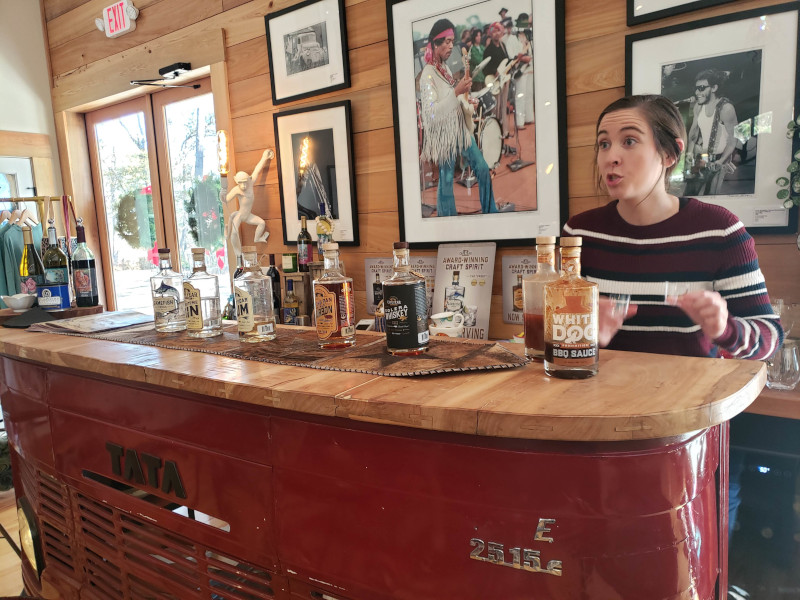 At the center of this undertaking are the County, Economic Development Commission, and Chamber of Commerce, who work together to create positive things for Bladen County community members. “Relationships with our towns are critical,” Heustess says. “They have a lot of the infrastructure—the water, the sewer, the roads, the industrial parks—that you need to bring these success stories to fruition. And then the granting agencies—we’ve had great support from the Golden LEAF Foundation. Those are the folks that got the tobacco settlement money to help North Carolina’s rural, tobacco-dependent, and economically distressed communities. They’ve helped us put together some programs here. The U.S. EDA has supported programs here. We’ve also had a lot of success working with our electric membership cooperative partner, Four County EMC. They give us small grants to do zero-interest financing on our big industrial and commercial projects.”

Another extremely valuable partner in meeting the challenges of living in a sparsely populated place is the North Carolina Department of Commerce, which connects local communities with the grants and funding needed to attract new businesses, ensuring future prosperity for the region.

“We’re getting critical infrastructure investment in the Elizabethtown Airport Industrial Park, which is one of the coolest, most successful endeavors for economic development in the County,” shares Heustess. “We’re getting major road, water, and sewer expansions there.

This is considered one of the nicest rural industrial parks in the state. We have six industrial incubators, so it’s a small space where industry can startup—they range from 4,500 ft right on up to 27,000 ft. We’ve been doing these for 20 years and we’ve never had a day of vacancy. In fact, we have one industrial bay that has graduated four, 1 million dollar businesses.”

At the heart of the park is the unique Cape Fear Winery, Cape Fear Vineyard and Winery, which is becoming a destination unto itself and is connected to a green park with a paved pathway that circles through the winery’s property paths, petting zoo, gift shop, and lakeside cottages. “It’s a beautiful path that a lot of the locals use, even though it’s intended for tenants of the industrial park,” says Dennison. “Bladen is a wonderful area for grape growing and we have another family-owned winery called Lu Mill Vineyard close to Elizabethtown, which has done a lot to help the agricultural industry in this County. They host a few events out there that draw a lot of people. And I’d be remiss if I didn’t mention what they’re doing in Bladenboro, to make sure that town has the renaissance it deserves.”

The Bladen County EDC is currently working with Elizabethtown to develop a 32-acre Live-Work-Play in the middle of the industrial park. “It’s a light industrial park,” Heustess explains. “People love the winery, and we already have commitments from a new distillery, a boutique inn, and a daycare. Cape Fear Valley Health Systems has also agreed to put in a modern primary care, urgent care, and medical specialist facility, so it just hits all the buttons: industry, tourism, and healthcare.”

Heustess admits he’s learned a lot through the process of building Bladen’s Strategic Plan, and he’s excited to carry it out and make more improvements for the County. “We knew a lot of these things going into it, but the Strategic Plan crystallized our vision,” he says. “So, we’re going to take on infrastructure, education, and promotion, and create a lot more local success stories.”

What: A diverse and growing community with development projects in the works

Where: North Carolina with its county seat of Elizabethtown