For the first 75 of its 80 years, Sugar Hill, Georgia was a sleepy little hamlet, content to play its part as a bedroom community in the Atlanta metropolitan area. Past leadership worked hard to lay the groundwork and finances necessary for extraordinary changes to take place. Then several years ago imagination led to bold action and a previously absent downtown began to come alive. Old city hall was repurposed into a business incubator – The Suite Spot.  An amazing, mixed-use commercial, retail, residential mecca is in the works. And the new E Center is now officially open as a gathering place in the heart of downtown. Yes, life in Sugar Hill is sweet, indeed.

According to Sugar Hill, Georgia Mayor, Steve Edwards, “It goes back to when I started on council in 2003, and residents wanted a thriving downtown. We took the initiative and gradually, patiently, pulled it off. We sat idle for a long time, until we realized the timing was right to create a sense of place and we did it through the Downtown Development Authority (DDA). Our new City Hall – built in 2012 and opened in 2013 – was the catalyst that kicked everything off. Next came the amphitheater, called The Bowl, behind City Hall. We created a kind of regional entertainment district there. Adjacent to The Bowl is an outdoor plaza, and a splash pad for kids to enjoy. Then, we built the Eagle Theater and our E Center – the heart of our city.” 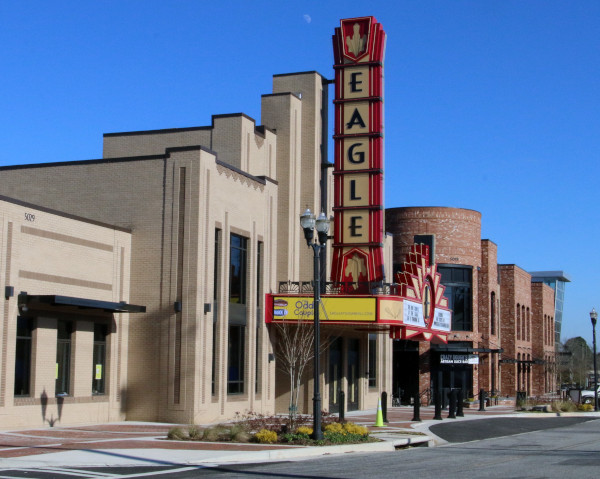 The E Center includes a performing arts theater, as well as restaurants, commercial, retail, and a community gymnasium that has indoor courts for basketball, volleyball, and pickleball; tread mills; weight machines; and a walking track. Free gym memberships are offered to Sugar Hill residents – within the first three months, over 4,000 residents joined. The next step for downtown is the residential component. A $78 million private investment across the street from City Hall, The Broadstone, will feature carriage houses, apartments, and restaurants. This addition to the downtown will also house the city’s art gallery and history museum and will include a new public park directly across from City Hall where the old town green was located.  A $50 million assisted living and memory care facility designed by Harrison architects is breaking ground in the next few months. Three additional private sector projects, valued at over $200 million, are also scheduled to begin construction in the near future and will bring additional housing options.

“It’s a good mix,” says Edwards. “Not just for seniors and Millennials, but anybody who wants to be a part of downtown. All kinds of price points are in our plan, because we do own multiple properties, and we’ll be bringing a lot more multi-family living into the downtown – the more people the better. We bought an old school from the school board and that’s where The Broadstone multi-family complex is going. When I took office as Mayor, we started buying properties downtown and, over the years, we’ve assembled quite a number because we wanted to be in control of our own destiny and be strategic about how we grow.”

The Mayor praises his council and staff for the ongoing success: “We all get along and see the same vision of making Sugar Hill a great place to live, work, and play. That’s the magic formula. We’re in office for all the right reasons and that has really pushed the timeline to a faster pace than you see with most cities. We’re all a bunch of risk takers is my point. Our population is around 24,000. I see that growing at a faster pace than most cities because we have a really good school system and great development going on.”

Brandon Hembree, a Sugar Hill, Georgia council member for the past six years and member of the DDA, shares his insights: “We have lots of great things happening in Sugar Hill. We’re about 85 percent residential, so we don’t have very big economic drivers. Most of the people who live here either work from home or commute to work. Over ten years ago, we did a survey, and the number one thing residents wanted was a downtown, which we didn’t have – a gathering place to eat and shop and get together as a community. So, we’ve been focused on mixed-use development; working hard to create entertainment options, and housing, and workspaces for people who might want to live in or open a business in Sugar Hill.”

Keeping citizens engaged and in-the-know every step of the way has been a priority. With the belief that building community is equally as important as placemaking, the city created a number of user groups, everything from an Arts Commission to a Historic Preservation Society, to give people opportunities to get involved. As a result, Sugar Hill, Georgia has seen community champions step up to advocate for projects, and a large base of volunteers from different groups now meet, regularly, to network about ways they can work together.

A healthy, active community is also important. In that regard, Sugar Hill is in the midst of a major construction project: increasing sidewalk capacity throughout the city to make it as walkable as possible. And a multi-phase greenway project is also in the works. Hembree reports, “Phase one of the Sugar Hill Greenway will be about six miles, starting in the downtown and going through several of our parks and connecting some of the greenspace we’ve acquired over the years. In addition to purchasing property in our downtown, we’ve really been targeting greenspace properties around our city, and recently bought a 22-acre tract to turn into a future park.” 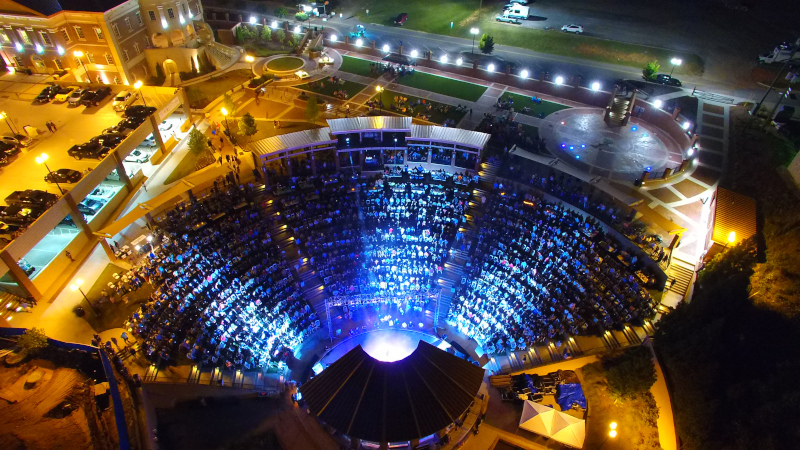 A majority of the businesses in Sugar Hill, Georgia are small or home-based. “That’s the lifeblood of our community,” says Hembree. “When we realized that fact a few years ago, we decided to turn our old city hall into a business incubator. It’s called The Suite Spot at Sugar Hill and it’s now completely full. We have about 40 co-working members and 12 small local businesses that lease space upstairs. An offshoot of that was the Sugar Hill Business Alliance (SHBA). That organization ranges from 100 to 200 members; they do monthly networking events with each other and have been invaluable in helping us get a lot of projects done in our downtown. We’re also very thankful for our close relationship with Gwinnett County. We do lots of joint projects such as road construction, paving, and sidewalk installation with them. From an economic development standpoint, our partnerships with the Gwinnett Chamber of Commerce and Partnership Gwinnett have been key in helping us grow the business community in Sugar Hill.”

Eyeing the future of the city, Mayor Edwards reflects, “I’d like to see Sugar Hill, Georgia continue on its path to having a thriving downtown with an old town feel. Our Eagle Theater has an art deco style, but it’s brand new. That’s the unique thing, we’re building everything from scratch, but we want to make it look like it’s been there for decades. We’re also looking for the right public/private partnerships for residential downtown, and other opportunities. When I took office in 2003, multi-family was a dirty word. But now, it seems to be the right fit to have a tight, dense housing component to an entertainment district. That’s what I’m looking at. If you want to see a play, go to the splash pad, work out in the gym, go to a bar, or eat dinner, you’ll find it all in downtown Sugar Hill.”

These wise words are often used when injecting wisdom into our health care system, and Kaiser Permanente is putting that wisdom to work with the collaboration of Synergy Benefits.

Kaiser Permanente and Synergy bring a proactive approach to a reactive industry.

The powerful combination of America’s largest not-for-profit health plan together with one of the most admired integrated care models in the industry makes Kaiser Permanente a go-to leader in helping shape the future of health care both nationally and – for the last 35 years – right here in Georgia.  With more than 600 top doctors and specialists in 26 medical facilities located throughout Atlanta and Athens, Kaiser Permanente has been a force in care innovation, clinical research, and health education – all in service of their mission to improve the health of the communities they serve.

When Synergy was founded in 1999, their goal was to help organizations be proactive in understanding the cost drivers behind their medical plans through data analytics. Synergy develops targeted strategies to educate employees in how to be better consumers of health care with the goal of flattening health insurance increases. The Synergy Advocate Support Team helps employees and their families to efficiently access all of the coverages provided by employers. When Synergy acts as an advocate for their clients’ employees, the employees have a better appreciation of the benefits and a relief from the complicated system of care in the United States. Synergy is constantly looking for ways to improve services and make life easier for employers and their employees.

Kaiser Permanente’s proactive approach to preventive medicine combined with the data–driven proactive design that Synergy provides is a powerful and healthy win for the City of Sugar Hill and its employees.