The Aquaponics Association – Changing the way we do food

Changing the way we do food

A non-profit advocate of the aquaponic grower, The Aquaponics Association is on a mission to expand the practice of aquaponics through education, advocacy, and connection. The many benefits of aquaponics and how it will affect the next generation of sustainable farming is a conversation that is growing on a global scale. Ultimately, benefiting the realm of organic food production worldwide.

Business View spoke with Brian Filipowich, Chairman & CEO of The Aquaponics Association, and Arvind Venkat, Commercial Aquaponics Director, for their insights into this fascinating industry and the critical role the Association is playing to further awareness.

BVM: So, what exactly is Aquaponics?

Filipowich: “Aquaponics is the combination of hydroponics (growing plants in a water-based system) with aquaculture (the raising of animals, such as fish, shellfish, etc., in water). When you put the two together, you create a recirculating system of fish and plants. The basic way it works is that you feed your fish, they produce waste, and then the plants are able to use that waste as the nutrients they need to grow. They simultaneously filter the water for the fish because they’re taking up the nutrients. Because of that symbiotic recirculating system, you end up saving a lot of water and using everything in your system, rather than having to emit a lot of waste.” 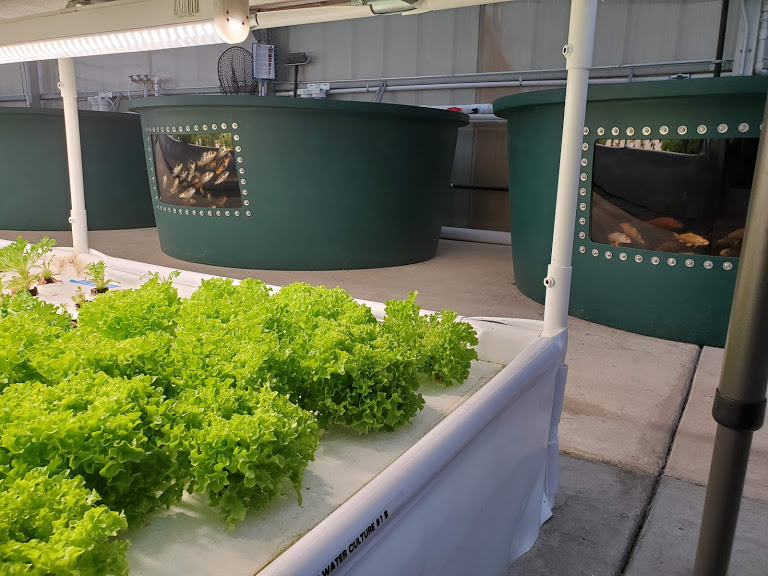 BVM: Is aquaponics growing as an industry?

Filipowich: “It has been a slow and steady increase of business. Aquaponics is not as big as either hydroponics or aquaculture, alone. Gradually, there’s been more commercial operations and they’re increasing in size and technical capacity. Much of it is getting the technology to work right. It’s a challenge because you’re basically running two parallel industries.

“You have to be good at growing, marketing, and selling your plants, while also raising, marketing, and selling your fish. Plus all the business and legal aspects that come with both of those divisions. And the two have to be in balance with each other. We’re finally starting to see a critical mass, in the last five years, of a lot of commercial, high-tech aquaponics farms succeeding for long stretches. That’s been heartening for us.”

BVM: What are the advantages of aquaponics over hydroponics and aquaculture separately?

Filipowich: “Hydroponics relies on mostly synthetic fertilizers that are produced from petroleum. It’s a sterile environment – without a lot of bacteria. Because it’s not recirculating in the same way with fish, you end up having to dump a lot of the water to keep the water chemistry balanced. Hydroponic farms end up having to do large dumps of water that are actually rich in nutrients and still valuable but they have to discard them to get a new set of water.

“Similarly, with aquaculture, you’re continually feeding your fish and the waste is building up in the water, which then has to be dumped. That causes major environmental issues and it’s also a waste – it takes money and resources to create all that fish food and nutrients and then you end up throwing a lot of it away when the nutrients build up too much. Most Recirculating Aquaculture setups include a percentage of the flow through component of freshwater, burdening aquifers in the process.

“By combining the two, you’re solving those problems. Rather than dumping the fish waste, you’re using that for the hydroponics. An interesting thing about aquaponics is that you need a very healthy, large bacterial colony, which also helps to create a steady, stable water system. So for aquaponics growers, once you reach your balance and you know how many plants you have, how much your fish are eating every day, the water is able to stay relatively stable and the bacteria help to do that. It also improves plant health and is more a natural growing environment for plants than hydroponics, which is more sterile.”

BVM: Can you share the backstory and evolution of the Aquaponics Association?

Filipowich: “The Association was formed in 2011, incorporated in Colorado. It’s been a bumpy ride with some ebbs and flows. For the first seven years, it was a volunteer-run organization. By 2018, we’d had a successful conference two years in a row and were able to start compensating someone part-time to keep things moving.

“Since then we’ve been getting more high-profile board members, more affiliate and general members. Our conferences have been growing in size, our social media following has increased, as well. We have about 250 total members throughout the world, around 200 are from the U.S. Thirty to forty are affiliate members that pay a bit more and have the opportunity to advertise their aquaponics goods and/or services on our website and our social media.”

BVM: What role does the Association play from an education perspective?

Filipowich: “One of our Association working groups is Aquaponics and STEM education. Interest in aquaponics is growing rapidly in schools, there are over 5,000 aquaponics systems integrated into science education in schools across the country. Some high schools have four-credit aquaponics classes for senior students. In those classes, they’d learn biology, chemistry, environmental science, physics.”

Venkat: “In addition to STEM, we have a research component that reaches out to university academics. We also have one in the community line of work. These three working groups are actively involved in engaging with their specific audience. The community program has developed a prison education program where inmates not only have the opportunity to engage in practice with aquaponics, but they also go through a certification program when they come out. Then they are provided an employment opportunity. The Aquaponics Association community department actually had their first batch of successful graduates earlier this year.

“On the other hand, when a lot of academic research goes through journals, it gets bundled with a heap of other horticultural innovations and doesn’t actually transfer to the farmer, in terms of ‘this is the concept and this is how you can put it into practice’. Our research wing decodes that information. We’re  in the process of establishing white papers that are farmer specific, as well as developing modus operandi for food safety certification. So we’re playing the role of liaison between the certifying body, such as the USDA, and the farmer who has the issue of transferring from a regular production to an organic production.”

Filipowich: “We also do public policy work. It’s been a long fight about whether aquaponics produce can be labeled USDA Certified organic – we’ve been working on that issue and there are now several certified organic aquaponics farms in the U.S. We actually got aquaponics written into legislation for the first time ever, in the 2018 farm bill. There have also been concerns with major food safety certifiers and we’ve organized growers and pushed back any false information. So we’re serving as a trade group, a representative board, for aquaponics growers.”

BVM: How would you describe the commercial value of the Association to members?

Venkat: “Through the Association, we’re looking to connect farmers to that next level by giving them connections in the industry that can help them develop their product, their methodology, their process. Not only are we trying to connect them to aquaponics suppliers, we’re also trying to get them connected with cross-industry suppliers. There are a lot of innovators in the space of horticulture, broadly speaking, and across different ranges of automation and technology. We’re trying to expand that horizon with new industry connections to boost the aquaponics farmers’ know-how. That’s been the primary focus in the last 18 months and now laying a roadmap going forward into the next decade.”

BVM: What does the future look like for the aquaponics industry ?

Venkat: “Three-fold complements are very important for the industry going forward. Organic certification is the game changer, when it comes to recognition of the product. Automation and data monitoring have seen some great innovations from leading tech-based companies, so it reduces the risk factor in getting into the industry. And just overall the size and scope of investments – getting angel investors toward food-based technology – has increased in the last five years, and aquaponics has greatly benefitted from that. Keeping all this in mind, the next ten years will be significant in ramping up scalability on aquaponics.”

Filipowich: “I’d like to add this: Tilapia is a very hearty fish that is used most often for aquaponics. It’s very good at converting feed into protein. But it doesn’t have very good market value. Now the bigger farms are going for higher market value varieties. Superior Fresh, for example – the largest aquaponics farm in the U.S. – is doing sushi-grade salmon. With several new design iterations and innovations in Aquaponics, fish like Hybrid Striped Bass, Arctic Char, Barramundi, and Sturgeon are soon entering the market scene through Aquaponics. If you’re able to get even more revenue from your fish like some of these large farms are doing, that could also be a game changer on the commercial front for the future.”

What: A non-profit organization and advocate for the aquaponic grower.

Where: A global presence, incorporated in Colorado.