In more than 30 years of operation, Airlift Northwest – a critical-care air transport service connecting to patients in Washington, Alaska, Idaho and Montana – has touched countless lives.

Its chief flight nurse, Brenda Nelson, tells myriad stories involving care provided to premature babies, stroke and heart attack victims, as well as those with hidden medical issues who encounter difficulty at the most inopportune moments – and often in the hardest-to-reach places.

Airlift Northwest landed its helicopter to get to a man with a heart defect who’d been stricken while hiking in rural Washington, and, after two nurses took turns maintaining CPR and administering medications for nearly 90 minutes, he was revived.

“That has become a story we talk about a lot, involving a super nice kid who is doing well today, but stories like that keep us mindful of our mission,” Nelson said. “We want to give people a greater opportunity to have life, to experience life and we’re thankful to work for a service which provides that.”

Prior to its launch in 1982, Airlift Northwest’s eventual founder, Dr. Michael Copass, was conducting a training exercise in Alaska when three children were badly burned in a nearby fire. Their injuries were such that immediate transport to a medical facility was necessary, but no such transport was immediately available and two of the children died at the scene. The third ultimately died on the way to a hospital after transport was finally secured.

Airlift Northwest has been accredited since 1997 by the Commission on Accreditation of Medical Transport Services, which reflects adherence to patient care, safety and operational standards within the industry. It engages pilots with the training and pertinent local knowledge to operate their aircraft, which means they’re familiar with flying over water, mountainous terrain and in air corridors where hot-pockets or winds are prevalent.

Pilots and medical personnel participated in more than 4,000 transports last year, and Nelson said Airlift Northwest will continue in its current region of service while seeking means to maintain funding viability, thanks to changes in the healthcare law and declining reimbursement rates.

A new membership program, for $79 a year, covers a family so that if transport occurred, no charges would be assessed to anyone beyond what insurance pays.

“Dr. Copass use to say that our good work would speak for itself, but we’ve realized that it is important to do more to let people know what we do,” Nelson said.

A recent benefactor has been author Richard 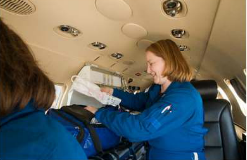 Bach, who established a fund – “A Gift of Wings” – to benefit critical care programs affiliated with UW Medicine, Harborview Medical Center and the services provided by Airlift Northwest. Bach took off from his home in Washington’s San Juan Islands in an amphibious, single-engine Easton Gilbert Searey and inadvertently clipped power lines as he prepared to land at Friday Harbor Airport. He crashed and sustained severe injuries to his head, chest and spine.

Within minutes of the accident, he received treatment from RNs affiliated with Airlift Northwest who tended to his injuries, secured him for flight and transported him at Harborview Medical Center in Seattle. He survived and has since credited Airlift Northwest for saving his life, and he cited the experience as inspiration for a new passage to be published with a new edition of his noted work, Jonathon Livingston Seagull.

AT A GLANCE
WHO: Airlift Northwest
WHAT: Critical care air transport service
WHERE: Headquarters in Seattle, Wash.
WEBSITE: www.AirliftNW.org

Orlando Venues – The Amway Center and... 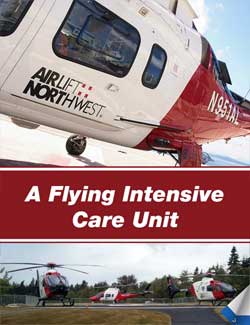