Van Buren Township, Michigan – The place to be right now

“The place to be right now”

Van Buren Township (Twp) is a charter township of Wayne County, Michigan with deep historic roots in the region. The Township was named for Martin Van Buren, eighth president of the United States (1836-1840), and at the time of its formation, already had upwards of 500 residents. The first Township officials were elected almost immediately and on January 26, 1837, Michigan was admitted to the Union.

Over the years, the Township has grown at a remarkable rate, spurred on by the coming of the railroad to Denton in 1838 and to Belleville in 1881; the formation of Belleville Lake in 1926; and the occurrence of World War II, which created the Bomber Highway (now known as I-94), the Willow Run Bomber Plant, and Willow Run Airport. In 1926, Van Buren Township underwent its most notable transformation when the electrical dam built at French Landing by Detroit Edison transformed the narrow Huron River into a seven-mile long lake. The community then became a popular resort destination as city dwellers from miles around came to swim, fish, and build summer cottages on the beautiful lakeshore.

Today, Van Buren Township is a thriving community enhanced by its homes, schools, churches, shopping centers, and industrial parks. Its convenient location near two airports and two major expressways has boosted interest in the Township, and as a result, several new residential and industrial developments are under construction. Belleville Lake, now with hundreds of homes along its shoreline, continues to be a prime recreational site.

Van Buren Twp. is blessed with a fascinating past, a vibrant present, and ambitious plans for the future. Business View Magazine recently spoke with Township Supervisor, Kevin McNamara, and Matt Best, Director of Public Service, for updates and insights into this visionary community. The following is an edited transcript of that conversation.

BVM: Geographically, the Township surrounds the city of Belleville, although the two are administered autonomously. Can you share the story behind this?

McNamara: “Van Buren Township is a community of about 30,000 people situated almost dead center between Ann Arbor and the city of Detroit. We own Belleville Lake and there’s a small city about a mile and a half square in the center of the Township called the city of Belleville. We liked the city so much, we named our lake after it. Unfortunately, four years ago, when this administration came in, the township infrastructure was crumbling after 185 years. There were no plans in place with regard to sustainability, and there was an identity crisis amongst the city’s residents.

“In fact, one of the first things we did was contact the post office to identify Van Buren Township as a community, which started a battle because most residents considered themselves ‘Bellevillians’ from Belleville, not Van Buren Township. That’s what started it. But we did extensive polling throughout the community and found out what matters most to people. Then we began to systemically rebuild our community from the ground up.”

BVM: What projects were undertaken to alleviate residents’ concerns?

McNamara: “Public safety was the number one priority for people. So we upgraded our fire department with two new fire trucks and a ladder truck (over $2 million dollars worth of equipment); rebuilt both of our fire stations; rebuilt all of our turnout gear; retrained all our firefighters; and then, to modernize the department, we created a hybrid staffing system that is extremely inexpensive to run. This includes full-time and part-time workers who work side by side. There is nothing in the whole building that hasn’t been upgraded in the last two years.

“We simultaneously worked on the police department. We rebuilt all their infrastructure, their radio systems, their 911 dispatch system, and we changed out all their cars. Then we instituted a system of continuous upgrades for sustainability. Every year we put a few hundred thousand dollars aside in a fund, so the money will be there in the future when needed for equipment, etc. We’re using the first four years of savings to purchase a 3rd $400,000 fire truck next year. And then, the next such purchase won’t happen for the next 10 to 15 years, so there will be lots of money set aside for public safety equipment.

“Funding comes from a variety of sources. We charge one mill for our taxes, which generates $1 million; we charge six mill for public safety which generates $6 million; our landfill generates $2.5 million towards operations of our township; and the normal building development fees, state revenue sharing, and other sources of revenue build our budget out to $17 million a year. We have the second lowest taxes in southeast Michigan.”

BVM: How are you addressing property improvements?

McNamara: “In the past each neighborhood had well-kept houses and a few that were blight. We discovered that they people who lived there were elderly or needed help keeping up with their homes. We then realized the State Laws where mean spirited, so we changed them. The solution of fining these residents just didn’t work for our community, so we created ones that helped out and it’s worked. The quality component of building in our community has gone up drastically. 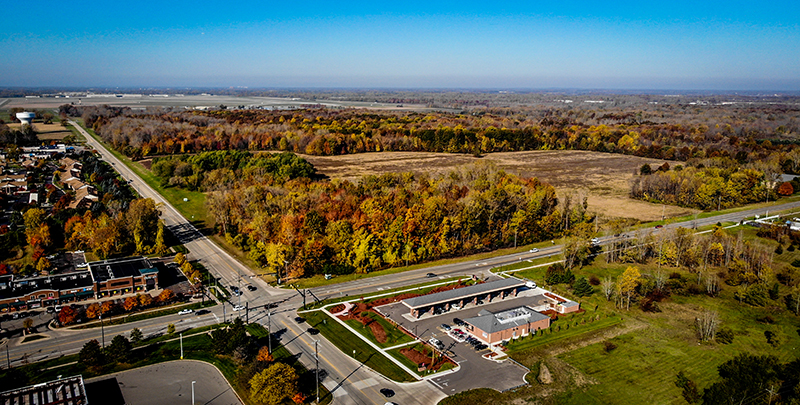 Best: “Four years ago, when Supervisor McNamara came into the Township, there were significant challenges to getting the community to comply with ordinances and improve structures that were unsafe, in order to attract new businesses. Residents were happy with the schools and local businesses and housing and amenities but there was the underlying current of blight; a lot of areas that needed to be developed and lots of opportunities to do so. Under the direction of Supervisor McNamara and the Board of Trustees, a massive undertaking was done to identify areas where the Township could partner with residents to assist with improving blighted properties, improving the types of developments that were coming on board, improving our parks, our township facilities and service, and working with the residents to accomplish what they wanted in their community. It has significantly changed things for the better. Residents have noticed that the community is brighter and well-maintained and blight is no longer showing up as a big problem.”

BVM: What progress has been made with business attraction?

Best: “On the development side, we were looking for companies that wanted to be part of our community, long-term. Over the last four years, we’ve attracted Subaru’s North American world headquarters for R & D; businesses related to the American Center for Mobility; one of the smart car research centers in the U.S.; tier-one automotive suppliers including Maser Polymer – their North American Headquarters is here. All these companies have become part of Van Buren Township and provide for the continued development. 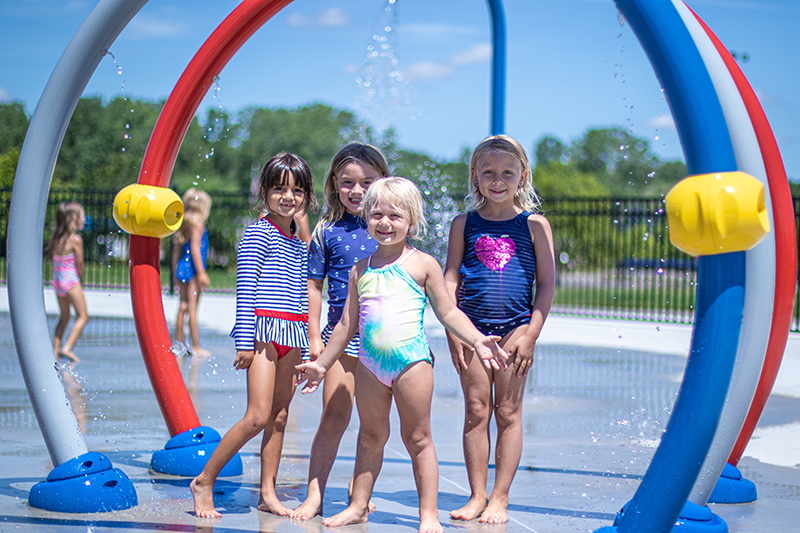 “People want to live here now and as a result we’re seeing strong growth in single-family housing. And our standards for single-family and multi-unit development are getting us a better product. We have a great location, low tax rate, low water rates, and we’ve attracted businesses. So the jobs are here.”

Best: “The Township has made a significant commitment toward creating recreational opportunities. The park behind our Township Hall used to be a soccer field – now we have active and passive recreation there: baseball, soccer fields, pavilions, and the largest splash pad in Wayne County.”

McNamara: “We built that large-scale, $1.2 million splash pad addition last summer to make a bold statement to our community and the communities around us that we value our children. So we built the pad one foot taller and one foot bigger than any other in the area. We used a little money from the general fund, and from two local landfills that contribute to the fund we use, also from our Downtown Development Authority, and $200,000 from a local civic fund (a charitable group). We’ve also obtained many grants to extend our walking trails, build pickle ball courts and pavilions, and enhance park space. We have found a way to share the cost with many different governments and organizations. We’re not just pulling money from the general fund.”

BVM: What is the vision for the future of the Township?

Best: “We haven’t built short-term solutions; they are built to last and to be maintained and improved upon over the next 20 years. It’s not expensive to maintain a sustainable, well-built infrastructure and so now, we’re poised to carry on with it in a cost-effective way. That’s how sustainability defines us.”

McNamara: “Now the goal is to build a nice community center but still make it affordable. We did a survey and learned that 83 percent of our residents would use a community center without a pool. So the idea is to create a sustainable addition to our Township Hall that will be the central focal point for recreational activities – inside and out – because it’s adjacent to the renovated park with the splash pad. It will be a home for community meetings, physical activity, outdoor concerts, and movies. The best part, according to preliminary numbers, is that the Township will be able to do that with little or no change in our financial impact to taxes or our budget.

“Van Buren Township is the place to be right now. We’ve always been a premiere community and people are starting to pay attention. Our tag line sums it up well: ‘Looking to the future but remembering who we are.’”

Uniquely positioned at the crossroads of I-94 and I-275, between Detroit and Ann Arbor, the Van Buren Township area is quickly becoming one of southeast Michigan’s most desired locations for major technical hubs and thriving start-ups.

The American Center for Mobility and the Subaru Technical Center have placed the Township on the cutting edge of next-generation vehicle automation, where integration, testing and validation of connected and autonomous vehicle and mobility technologies can be performed in a smart city test center.

The community’s healthy economy is further bolstered through a partnership with the Detroit Region Aerotropolis. This collaboration fosters public-private development alliances that result in integrated offerings of facilities, amenities and services for conducting business on a global scale.

US Signal is a leading data center provider, offering connectivity, cloud hosting, colocation, data protection, and disaster recovery services — all powered by its wholly owned and operated, robust fiber network. US Signal also helps customers optimize their IT resources through the provision of managed and professional services.

As one of the Top 500 design firms in the nation, Fishbeck offers a wide variety of engineering, architecture, environmental science, and construction solutions. With so many services in-house, and so many offices to provide local attention, Fishbeck is a preferred all-in-one solutions provider.