Coffee smiles, from seed to cup

“Kona” is the market name for coffee exclusively grown on the slopes of two Hawaiian volcanoes – the Hualalai and Mauna Loa Mountains. This zone, approximately 30 miles long and 2.5 miles wide, has the unique advantage of mineral-rich volcanic soil at a high elevation in the area’s characteristically wet and dry tropical climate. More than 900 farms are clustered around the Kona District of Hawaii, producing around 20 million pounds of coffee cherries each year. With such a limited supply, Hawaiian Kona coffee is one of the most expensive (upwards of $60/pound) and sought after coffees in the world. You’re much likelier to see Kona blends, with some containing just 10% certified Kona beans, than true Kona coffee.

Coffee isn’t native to Hawaii – the missionary Samuel Ruggles brought the coffee plant to the rugged “Gold Coast” in 1828 to see how well it would take. It came from Brazilian arabica cuttings and, to the Reverend’s delight, thrived in Kona’s daily cycle of morning sunshine and afternoon cloud cover. Consequently, coffee established itself as a major crop in Hawaii by the end of the 1800s. Fast forward two centuries and some 6,900 acres of land across the State are now dedicated to coffee cultivation.

Flipping back the pages of history, in 1989, across the Pacific Ocean in Japan, a company called UCC Ueshima Coffee (est. 1933) expanded its coffee business into Polynesia by building the specialty farm now known as the UCC Hawaii Kona Coffee Estate. It became their second directly-managed coffee estate this side of the meridian, the first being the Craighton Estate – a 200-year-old coffee plantation in Jamaica’s Blue Mountains – purchased eight years prior. With this latest acquisition, UCC, which had started the trend for canned coffee when it debuted its “UCC Coffee with Milk” in 1969, welcomed the world-famous Kona into its fold.

“UCC is one of the biggest coffee companies in Japan,” reports company Manager Benymar Sadumiano. “Their motto is ‘Good coffee smile’ and we follow that, too. Everything revolves around the passion for coffee. A smile is what we want for all our customers when they drink our Kona coffee.”

UCC Hawaii lies at the foot of Mt. Hualalai, on the west side of the Big Island. The Estate has a farm, a wetmill, a retail store, and a roasting factory. All four facilities give a panoramic view of the city of Kona and the beautiful sea. Their hands-on Estate Tour provides an excellent opportunity to learn more about how coffee is grown in Kona, and their paid Roastmaster Tour even lets visitors roast their own coffee. “We have about 40 acres of land and 21 of those are planted with Kona coffee,” Sadumiano says. “We’re up near Holualoa Village, which is prime Kona coffee growing area within the coffee belt.” 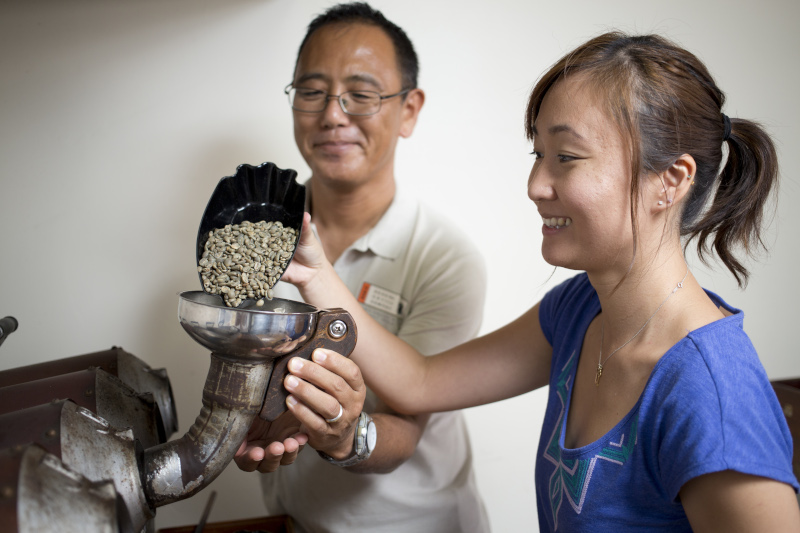 According to Sadumiano, the Estate has a long-standing relationship with the community and, each year, sponsors the Kona Coffee Cultural Festival, which is the longest-running food festival in Hawaii. They’re also the main sponsor for the Miss Kona Coffee Pageant, whose candidates are then invited to compete for the opportunity to participate in the Miss Hawaii and Miss America competitions. “Each Miss Kona Coffee winner gets flown overseas to advertise Kona coffee in Japan,” Sadumiano notes. “We sponsor her for one week to promote our Kona coffee products in the Japanese markets.”

One of their trade secrets for best-tasting, delectable Kona coffee is a special machine called a Crackulator. “What it does is it chops the coffee beans up instead of grinding them down, because a regular grinder creates heat and that spoils the taste of the coffee,” Sadumiano says. “Our process also removes the chaff in between the roasted beans – that skin tends to make the coffee a little bit more acidic. This gives the Kona coffee a little bit of a finer taste.”

General Manager Tsukasa Kobayashi, an agronomist by training, is one of the technical brains behind the company’s approach to coffee farming and production. He’s also involved in coming up with new products like their Honey and Barrel-Aged Kona coffees. “For regular Kona coffee, we pick the cherries, peel the skin, and wash the beans in water,” Kobayashi explains. “The honey process is a dry process, we just take off the skin and put the beans directly on the drying deck to ferment under the sun.”

“We let the micro-organisms and nature do the rest,” Sadumiano chimes in. “It tastes like honey.”

They also have a barrel-aged product that uses the estate’s green beans. Kobayashi adds, “We spray rum barrels with rum before adding our beans. This creates a unique flavor and aroma. We think of that process as a kind of Hawaiian collaboration, because we’re pairing the Kona coffee with local, Hawaiian rum.”

The rich, sweet smell of rum is the perfect complement to the refreshing acidity of Kona coffee. The beans are stored in rum barrels for four months to create the product’s distinct flavor. “Tracking temperatures, rainfall, and humidity is another ongoing project” Kobayashi shares. “We’re always comparing  those, together with soil analysis with our actual harvest, to decide to make some corrective action in any section of the plantation.”

“We’ve had economic recessions but with the support of UCC Japan, we have always survived,” Sadumiano admits. “One of the main challenges we’ve had to face is coffee borer, which has been ravaging coffee since around 2010. We’re now pulling through that. This is the first year that we were able to come up with this much Extra Fancy since the start of the CBB infestation. Most of our green beans, they came up to Number One, which is a grade higher than Prime coffee.”

The coffee borer, a small beetle native to Africa, is of particular concern when it comes to Kona coffee because of its small harvest size. Managing the highly contagious, crop-killing coffee leaf rust (CLR) disease, the most recent pathogen to hit all major Hawaiian islands, has been another major struggle for the Estate and a primary focus of research for Japanese coffee conglomerate, UCC. 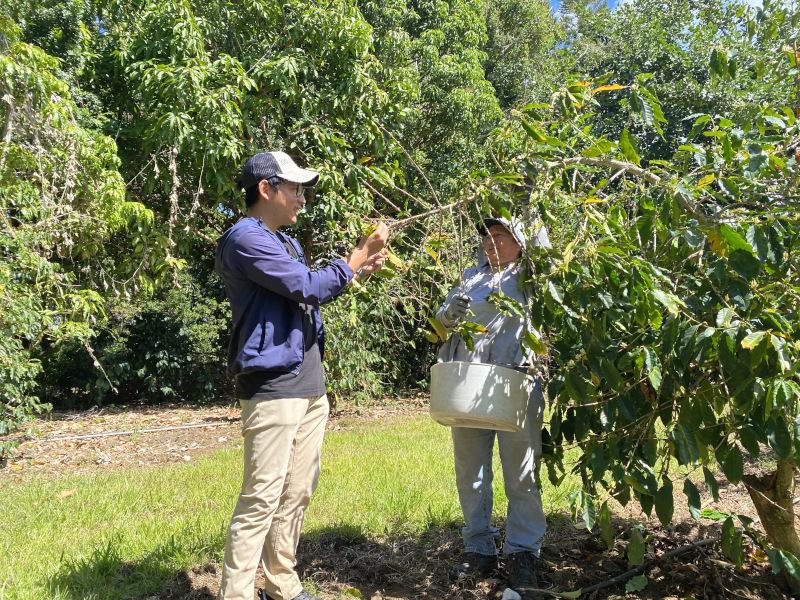 To that end, UCC Japan’s Research Division has teamed up with another Japanese company to provide satellite imagery analysis to the Kona plantation. “We know a lot about our harvest from these satellite images,” Kobayashi says. “We can check the coffee trees themselves just from the pictures, so we can understand the ‘where and when’ of the diseases. We can also get a sense of this year’s yield of Kona coffee, as well as forecast future crop yields.”

“We’re more on the defensive side now with the coffee leaf,” Sadumiano reveals. “We’ve just got to maintain the farm with proper management and adequate nutrition for the coffee trees, because everybody has the rust now in Kona.” The USDA is providing support by conducting further research on rust-resistant plants. However, these plants won’t be available for at least another three years. “We won’t see those varieties for a while,” Sadumiano affirms. “For now, we just have to be diligent about proper sterilization, fertilization, and control of the farm – because the workers can spread it and so can the visitors.” Guests are still welcome to tour the farm, but they’ll be limited to certain areas to limit the spread of CLR.

As for the future of the coffee farm and the everyday stressors it has, Kobayashi wouldn’t have it any other way. “It’s all good information we can use to move forward with,” he says. “Many of our trees are getting mature – most are over 30 years old – so, one of my plans is to replant and get fresh, new trees. I’ve also got to plant more shade trees for the coffee trees to protect them from ever increasing temperature. They also help keep carbon dioxide out of the atmosphere. It’s all about staying one step ahead of global warming towards more sustainable development goals.”

What: A subsidiary of one of the largest coffee companies in Japan

Bank of Hawaiʻi is ranked as America’s 3rd Most Trusted Companies in the banking industry category in 2022 by Newsweek. The bank offers financial expertise in Hawaii and the West Pacific, and offers a full range of services including business banking, loans and leases; merchant payment, trust and investment services.

Veritiv Corporation is a full-service provider of packaging, JanSan and hygiene products, services and solutions. Additionally, Veritiv provides print and publishing products, and logistics and supply chain management solutions. Serving customers in a wide range of industries both in North America and globally, Veritiv has distribution centers throughout the U.S. and Mexico, and team members around the world helping shape the success of its customers.